A photo of the "man in the hat" presented by Belgian federal prosecutors shows a suspect wanted in connection with the March 22 attacks in Brussels during a press conference at the Federal Prosecutor office in Brussels, Belgium, April 7, 2016.
Olivier Hoslet—EPA
By Vivienne Walt/Paris

Belgian police on Friday arrested the two only attackers believed to have survived last month’s bombings in Brussels and the killings in Paris last November, in a major advance toward smashing the terror network that has left Europe reeling for months. And while the arrests brought a palpable sense of relief to E.U. officials, it also raised worrying questions about how the men managed to evade a Europe-wide dragnet for so long.

Until their arrests in a Brussels suburb on Friday afternoon, the two men — Mohamed Abrini, 31, and 23-year-old Osama Krayem — were Europe’s most wanted fugitives, considered hardened operatives of ISIS, which has claimed responsibility for both the Brussels attacks on March 22, which killed 32 people, and the Paris attacks on Nov. 13, which killed 130. Belgian officials said a total of five people were arrested.

While Belgian police finally had something to celebrate — the force has been heavily criticized for failing to prevent the Brussels attacks — there was no assurance that the network had been dismantled. The fact that the two men were among the few survivors of the attacks in Brussels and Paris — almost every other known attacker blew himself up — has led to speculation among police and E.U. officials about whether they intentionally remained alive, in order to plot further attacks on the continent.

More worrying, the arrest on March 18 of another fugitive Paris attacker, Salah Abdeslam, came just four days before the Brussels attacks. That raised the possibility that Abdeslam’s capture might have triggered or accelerated the Brussels attacks, and whether, by logical extension, the arrests on Friday could perhaps lead to another attack.

The most important arrest on Friday was Abrini, a Moroccan-origin Belgian from the heavily Muslim Brussels neighborhood of Molenbeek, where the Paris attacks were planned. He was believed to be one of the three suicide attackers who wheeled homemade bombs into a crowded Brussels airport terminal on March 22; the other two blew themselves up, killing 12 people. Abrini — dressed in a white jacket and hat — either failed to detonate his bomb or otherwise intended to survive. Security cameras then caught the man — dubbed “the man in the hat” by the media — walking leisurely away from the bloodbath before breaking into a jog as he snaked through Brussels, where he managed to melt into the background for two and a half weeks. Belgium federal prosecutor spokesman Thierry Werts told reporters on Friday that “legal actions are continuing very actively” to determine whether Abrini was indeed that third airport attacker, and said his office would share more concrete details on Saturday, after investigators had worked further on the case.

But Abrini’s arrest was certainly a major break for the investigation into the Paris attacks. He has been on the run since those attacks nearly five months ago. Well known to Belgian police as a longtime drug dealer and petty criminal, Abrini was captured by security cameras at a highway rest station on the way to Paris, two days before the attacks in the French capital, driving Ibrahim and Salah Abdeslam, his childhood friends from Molenbeek. Ibrahim then blew himself up outside a Paris café two days later during the mass shootings-suicide bombings. Salah appeared to have ditched his suicide vest later that night and made his way back to Brussels, perhaps again with Abrini’s help.

The second man arrested on Friday, Osama Krayem, from Malmo, Sweden, also mysteriously survived the Brussels attacks, this time in the subway station in the center of the city about an hour after the airport attack, where Khalid el-Bakhroui, a Moroccan Belgian, blew himself up, killing 20 people. Security cameras caught the two men moments before the blast, but Krayem disappeared into the city in the chaotic aftermath. In January 2015, he posted a photograph of himself on Facebook with an automatic weapon and in combat gear, saying he had joined ISIS. “May God protect you soldier,” a friend commented online in Swedish, according to the right-wing Swedish news site Fria Tider.

Having fought with ISIS in Syria, Krayem snuck into Europe amid the mammoth influx of migrants last year, landing on the Greek island of Leros last September. Carrying a false Syrian passport in the name of Naim el-Hamed, he made his way to a refugee center in Germany, where Salah Abdeslam collected him on Oct. 3 and brought him back to Brussels. Two of the suicide bombers in the November attacks in Paris had also made their way into Europe from Syria amid the flotilla of migrant boats.

With Abdeslam, Abrini and Krayem all now in jail, one of the most urgent questions for police and prosecutors is how the group was able to remain on the run for weeks and months, despite being the targets of Europe’s biggest manhunt in memory. The would-be attackers could offer clues about how much of the terrorist network remains active in Belgium and France, since they appeared to have tapped into a network of collaborators who hid them during a period of more than four months.

Abrini was seized on the streets of Anderlecht, a southern suburb of Brussels, in an arrest captured by cell-phone video and posted on Facebook. Abdeslam was arrested three weeks ago just a few blocks from his family home in Molenbeek — close the area’s police precinct, which has mounted countless raids in the neighborhood since the Paris attacks.

After the Brussels attacks four days later, Molenbeek Mayor Françoise Schepmans told TIME that she was not surprised that Abdeslam had been captured in the heart of that neighborhood. “There are many people who do not live in the society, but live alongside the society,” said Schepmans, whose executive office overlooks the square on which the Abdeslam brothers had long lived. “So it is easy to hide in the neighborhood.” The question now is how many others might still be hiding. 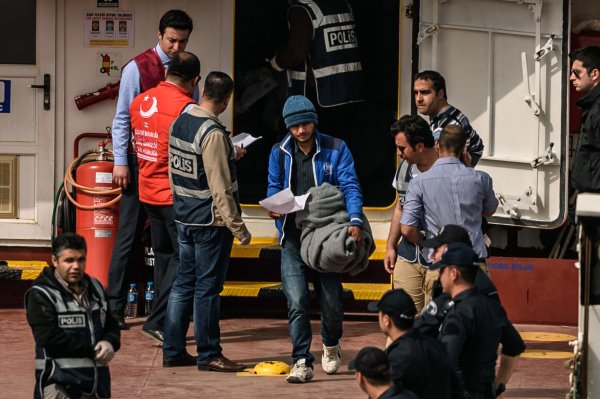