Transgender Advocates Fight Back With First Political Group of Its Kind

On Thursday night, one of the advisory board members for the newly formed Trans United Fund got a phone call. A 15-year-old transgender girl had been beaten, run over by a car and “left for dead” in Los Angeles. While LGBT advocates have for years tried to draw attention to this kind of violence, by holding vigils and keeping public tallies of how many transgender women are murdered in America each year, Trans United is taking a more systematic, long-term tack.

“What happened to that 15-year-old girl, that is the result of a series of political choices that people in power have made,” says Hayden Mora, a veteran of the SEIU and Human Rights Campaign who helped form the group. “We want to explicate those choices, and we want to move people to make different ones.” And by “people,” he means politicians from the municipal level all the way to the White House.

Trans United Fund is the first group of its kind, a 501(c)(4) organization comprised of transgender leaders and focused on transgender issues, and not just the obvious ones. It will, of course, fight against “anti-LGBT” laws like those recently passed in North Carolina and Mississippi. But the organization will also be endorsing a presidential candidate and asking every candidate to fill out a questionnaire about their stances on issues that advocates believe underlie transgender Americans’ outsized rates of homelessness, harassment, unemployment, discrimination and poverty. (Mora says the Clinton and Sanders campaigns have already informally reached out to the group, while Republicans have not. And yes, they emphasize, transgender people come in all political persuasions.)

Among Trans United’s immediate plans are developing legislative scorecards for states, and raising funds. More than 100 of America’s most influential business leaders and celebrities—from Apple’s Tim Cook to producer Rob Reiner to musician Bruce Springsteen—have opposed new laws that are viewed as anti-transgender. And Mora says they are expecting those who say they are allies to put their wallets where their tweets are. “This is the time for folks that tell us they care about trans lives to step up and demonstrate that with financial support,” he says.

Though the LGBT community is often summed up as a monolith with that acronym, subsets of the group have different political aims, and some transgender advocates feel they’ve not only been asked to take a backseat for decades—but also to only present the most “politically palatable” version of their community. So Trans United is making a point to start by putting the most marginalized among them front and center—the homeless, the incarcerated, those turning to sex work to survive, the HIV-positive—and focusing on solving their problems first. “We want to involve the broadest version of the community,” says committee member Andrea Jenkins, a Minneapolis-based artist, politico and black transgender woman. “Not just the sanitized, sort of whitewashed identities.”

With increasing visibility has come a proliferation of political enemies. Transgender people have never gotten more attention in the U.S., and that’s as true of television shows as it is of debates in state legislatures. One South Dakota lawmaker described their growing visibility as a “virus,” while other social conservatives have rung alarms, saying they must combat the “transgender revolution.” Advocates like those who formed Trans United have found themselves playing defense and this group is ready to play some offense. 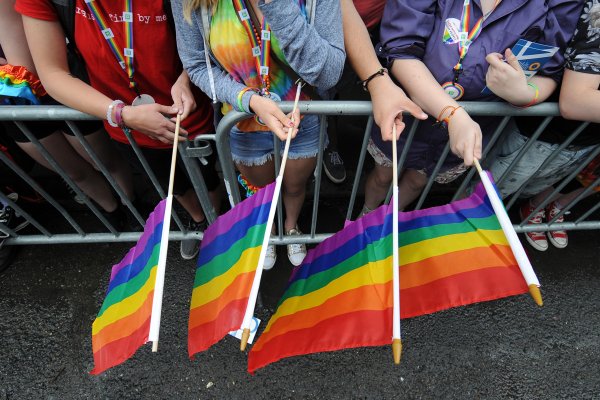 Conversation May Change Attitudes on Transgender Rights
Next Up: Editor's Pick