Why We Are Addicted to Divisive Politics

Viking
Ideas
By Daniel Shapiro
Daniel Shapiro is the Founder of the Harvard International Negotiation Program and author of Negotiating the Nonnegotiable.

While the extremity of the current political rhetoric may feel unprecedented, the emotional undercurrents are common across high-stakes conflicts. If we have any hope of restoring a functional political system that serves the vision of an American family, we must first understand these hidden forces.

Through over two decades of global fieldwork in negotiation, I have observed a common dynamic to emotionally charged conflicts. Confrontation focuses our emotional energies on the singular goal of winning over the other side. As we become consumed in this mindset, we reenact partisan patterns of conflict that may comfort our fears but undermine cooperation. Fierce loyalty to “our side” makes it taboo to break ranks, no matter what our leaders espouse. And should we feel an assault on our sacred values—the core of our identity—our anger turns to outrage, hardening the lines of division.

Everywhere today we see signs that this kind of conflict has come to our own politics. From the campaign trail to Capitol Hill, politicians refuse any opportunity to seek common ground. Repetition is the name of the game, from campaign slogans to the 24-hour media cycle. Yet the content of what is being repeated is profoundly dysfunctional, and comforts only the most loyal followers of each faction at the expense of offering a vision that might appeal to the general public.

Instead, candidates and elected leaders largely construct their identities through extraordinarily negative means, appealing to followers by telling them what they will not do and how they will not compromise under any circumstance. Even when offering something positive, their messages are prefaced by the implicit idea that the solutions they are offering would never be put forward by anyone else. Warped interpretations of the past and future are hurled at voters in a whirlwind of false histories and nightmarish visions of what may come. “We cannot have more of the same,” they say.

There is an allure to this kind of politics, a sense of falling, of vertigo. We fall in love with a candidate. We fall in hatred toward another. We fall through a dizzying, contagious mixture of appeals to loyalty and identity. Breaking ranks becomes taboo because it breaks an addictive cycle. It becomes taboo to communicate with the “other side,” to show respect or acknowledge the legitimacy of any of their perspectives. And political commentators tell us that divisive politics is necessary for running a campaign, for getting elected, for governing. To question the dysfunction is to undermine what is necessary for the survival of our nation. Everything we need in order to resolve a conflict becomes taboo.

It was not supposed to be this way, and it does not need to be. Our democracy already allows for a more integrative vision, and it guides us to a powerful example. As politicians once did in Georgetown, our politicians must be willing to come to the table and see their role as representing one umbrella nation within a democracy of parties. They must have an eye toward making the compromises necessary to extend values outward rather than projecting them inward for the sake of blind loyalty. They must be willing to sustain something greater than their own egos, their own survival, their own faction, for their own people and their own interests. Otherwise, we will all continue to fall prey to what I have come to call the Tribes Effect.

It will take work to resist the intoxicating temptation of our corrosive politics. To do so, we must recognize that we have the ability to identify those dynamics and resist the enticements of the warped psychology that the politicians are selling. We have the power to discern the values put forward by the many groups in our own society, and to work to fit them to a shared vision of democracy. 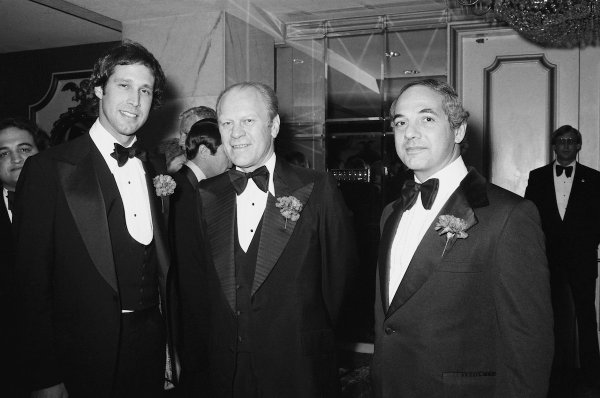 The 'Saturday Night Live' Episode That Changed American Politics
Next Up: Editor's Pick