I met Merle Haggard in 2008. He had just written a song about Hillary Clinton and wanted to sing it for me. So I went up to his home, in view of Mount Shasta, in northern California, and we spent the day together. The song was not one of his best, but he was a big Hillary fan; his other political business that day was to lobby passionately for the legalization of marijuana. He did not deny the legend that he wrote the words “We Don’t Smoke Marijuana in Muskogee” while stoned.

It was a good day. He talked a lot about Johnny Cash, who had inspired him to write true songs about his life. I introduced him to the music of Amy Winehouse, especially “Rehab,” which inspired him to tell me about his cocaine addiction, which–he said–he quit by going cold turkey on his boat.

A few years later, in 2010, the folks at the Kennedy Center honors contacted me. They were honoring Merle, needed a tribute written for the program, and Merle had suggested that either Dolly Parton or Joe Klein write it. They wanted Dolly to sing at the celebration; they asked me to write.

The original version of this story misstated the name of a county in California. It is San Joaquin Valley, not San Joachim Valley. 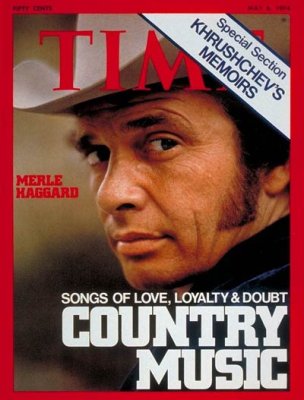 How Merle Haggard Went From Solitary Confinement to Stardom
Next Up: Editor's Pick