In Wisconsin, Trump Faltered and Palin Bombed. Why Cruz Will Struggle to Do Better

On the Friday before the Wisconsin primary, the Milwaukee County Republican Party had a dinner at the local American Serb Hall. It was a tough crowd for John Kasich, a self-described Croatian who didn’t appear to be trying very hard. The party stalwarts, acting on instructions from their beloved Governor Scott Walker, gave a hearty welcome to Ted Cruz, who met the challenge easily. But the weirdest part of the evening was Sarah Palin, who spoke as Donald Trump’s surrogate. She was nearly incomprehensible. And before long, people were actually rolling their eyes and giggling. “Someone get a gong,” a gentleman sitting next to me implored. She seemed lost as she talked about a neoisolationist foreign policy, “not just nation-building schemes,” she said, noticing the unrest in the audience. “It’s not something to laugh at, friends.”

Probably not. For one thing, he’s not very much of a Republican–which is why, I have no doubt, he will not get this party’s nomination with anything less than 1,237 delegates at the GOP’s convention in Cleveland. He has simply alienated too many of the party’s stalwarts. Even when he tries to pander these days–as on abortion, where he momentarily favored “punishing” the women who have one–he’s tone-deaf, going too far, then skittering away, attempting as many position modifications as Jeb Bush did on the Iraq War. His appeal has little to do with actual politics, except for the politics of resentment. It has everything to do with his “aura of personality,” which he told the Washington Post would be the defining strength of his presidency. He says such things without irony.

On the day after Palin’s tragic surrogacy, she was at it again–introducing Trump to a large gathering just outside the town of Wausau. “This feels like Alaska,” she said to the crowd, which was dressed in hunting and camouflage garb. Indeed, the Wisconsin Bear Hunters were having a convention next door–affirming, no doubt, their constitutional right to harm bears. There have been times, in both the Palin and Trump campaigns, when such colorful settings have been mistaken for America, rather than Americana. Any association of Hispanic bodega owners in New York City’s outer boroughs, and there are more than a few, is as patriotic.

Trump’s appeal in Wausau was simple. “You people are gonna be so rich,” he averred, because he was going to renegotiate trade deals and get our allies to pay for their own defense. He celebrated his personal bravado, implying that Trumpestuous ignorance would be more powerful than wimpy-kneed statesmanship. Look at all the pompous plumage he’d ruffled by calling NATO obsolete. It was, he admitted, “a big statement to make when you don’t know much about it.” But he was going to get the Europeans to pony up for our role in their defense. “I’m gonna be as presidential as I can be,” he said, “… and still get the money.” There was a roar. “I’m gonna get the money.”

The results in Wisconsin were reassuring to those who hope Trump might be stopped in Cleveland. The agent of that deliverance, Senator Cruz, is hardly an inspirational figure, though. I’ve been searching for some redeeming social value in his sneery speeches. He can be principled–his opposition to the ethanol boondoggle in Iowa was courageous–and he does have a sense of humor, but his jokes are revealing. In Milwaukee, he told two. One was about the Democratic field: “There’s a wild-eyed socialist with ideas that are dangerous for America … and there’s Bernie Sanders.” He also defined politics as “poli, which means many, and tics, which means bloodsucking parasites.”

The latter joke goes to the heart of the matter: this has become the Republican default position. Politicians are crooks; the federal government is a racket. This is not a new American theme, but it’s always been a minor chord. Hope is, and remains, more powerful than cynicism in this country.

On the day after the Wisconsin primary, Cruz was scheduled to hold an event in the Bronx, the historic home turf of ethnic dreamers. Perhaps he will take a walking tour of the bodegas, talk to the owners and find that the “New York values” he once derided are as American as bratwurst. 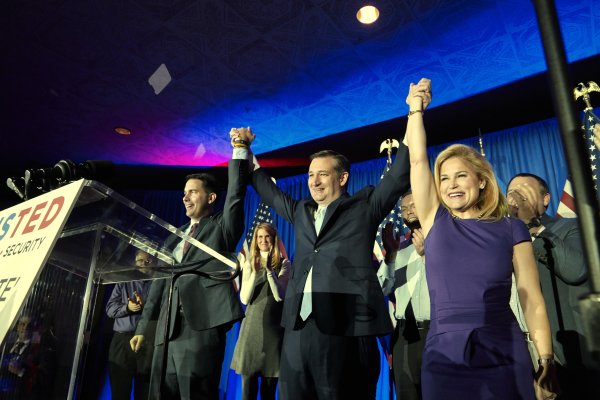