Virtual reality is still an unfamiliar experience for most. That could change this year as headsets–like the Oculus Rift and HTC Vive (below)–designed to bring immersive VR to the mainstream go on sale. Though all VR devices require strapping a box outfitted with a screen to your face, each takes a slightly different approach to convincing you that you’re elsewhere.

The Oculus Rift, for instance, focuses on sitting or standing experiences that let users look around them in any direction. The device achieves this with a camera sensor that sits on your desk and tracks the headset’s position. The Rift can convincingly re-create experiences such as being on a tall building or being trapped in close quarters with a Tyrannosaurus rex. For the moment, navigating these new worlds entails a game pad identical to those used by traditional consoles.

The Vive, by comparison, allows users to walk around virtual environments and replicates the experience of touching or holding objects. It can be startling, disconcerting, joyful. This added sense of depth costs considerably more and requires a lot of hardware, including two wandlike touch controllers and laser-emitting boxes to track movement that must be mounted in the corners of a room.

Depending on the budget, either the Rift or Vive would provide ample entertainment for anybody curious about virtual reality. But both require another big-ticket item: a high-end personal computer. Oculus and HTC have partnerships with PC makers that offer such machines for prices starting around $1,000. 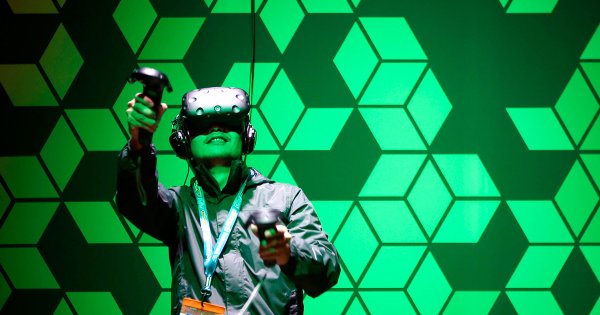 The Weirdest, Coolest Things You Can Do With Virtual Reality
Next Up: Editor's Pick