See How Americans' Belief in God Has Changed Over 70 Years

Fifty years after TIME posed the question Is God Dead? on the cover of the magazine, Americans’ belief in a supreme deity appears to be declining.

The article, which focused on a group of Christian theologians grappling with the idea of a world without an active God, cited a 1965 poll by Lou Harris finding that 97% of Americans still believed in God. By the time Gallup asked the same question in 2014, that number had fallen to 86%, with 12% of Americans claiming no belief and 2% with no opinion.

But according to Frank Newport, Gallup’s editor-in-chief, these numbers don’t tell the whole story. Back when Gallup first began asking the God question in the 1940s, Newport believes that “Americans felt obliged to say they were religious, but nowadays a lot of those same people feel more comfortable telling the interviewer, ‘No, I don’t believe in God’, or ‘I have no religious affiliation.'” The data may not actually reflect a decline in belief, he says. 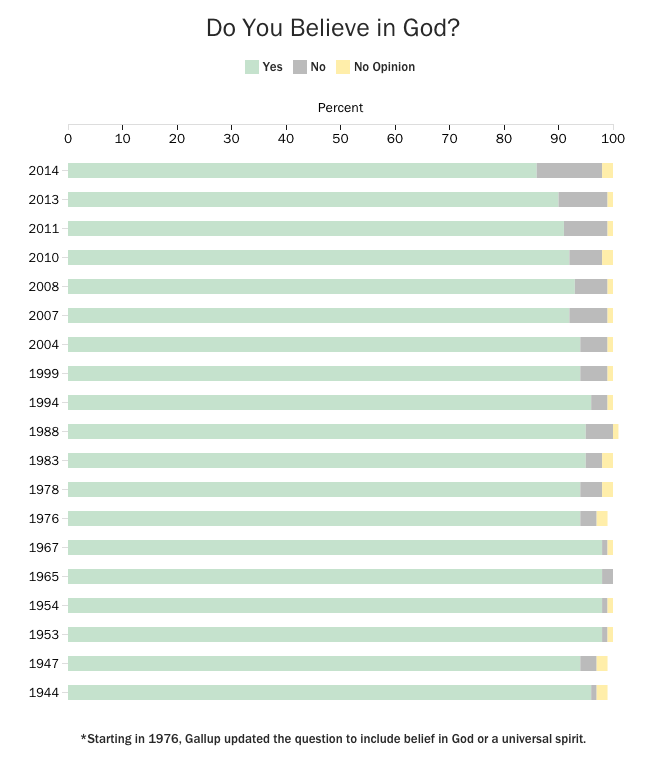 Increased honesty around spirituality may also account for the rise in those who claim no religious affiliation, known as the “nones,” a group Newport explores in his book God Is Alive and Well: The Future of Religion in America. He explains that “there were virtually no ‘nones’ in the 1950s—1-2% max—but almost all contemporary surveys show it’s now closer to the 20% mark.”

Newport credits the shift to cultural changes in America, “where verbally expressing what could be considered a deviant viewpoint might be more accepted [today].” That means polling data may become an increasingly clear measure of Americans’ belief in God, he says.

From 1944 to 1967, Gallup asked “Do you believe in God?” periodically. Gallup rephrased the question to “Do you believe in God or a universal spirit?” starting in 1976. Beginning in 1999, Gallup asked separately about belief in God and belief in a universal spirit; these responses are aggregated together in the chart above. All polls were conducted in the U.S. with roughly 1,000 participants, and a 3-5% margin of error. Read more about Gallup’s methodology.

The Strange Afterlife of Pontius Pilate
Next Up: Editor's Pick