Twitter is finally graduating from the second screen. The social network announced Tuesday that will live-stream 10 NFL Thursday Night Football games for free this fall. The games will be simultaneously broadcast on NBC or CBS.

For Twitter, which beat out larger digital players such as Amazon and Verizon for the streaming rights, the games could be a huge boon. Twitter user growth has stalled out, keeping investors pessimistic about the company’s prospects. But Twitter executives argue that millions of people who aren’t Twitter users still engage with the company’s content in their travels across the web. The NFL deal could help Twitter measure that so-called “total audience,” estimated to include 800 million people.

We’re a long way off from the sports world truly going digital-first. The games will be simulcast on NBC and CBS, which are paying about 45 times more for the broadcast rights, according to Re/code. Those networks will still be earning the lion’s share of advertising revenue from each game. In order to steal exclusive rights from TV networks, Twitter and its new-media rivals will have to open their wallets — and provide an audience.

Baby steps are happening, albeit slowly. Here’s a look at some of the other tie-ups between tech companies and major sports leagues in recent years that show the opportunities and challenges ahead for Twitter and Silicon Valley more broadly.

The Google-owned YouTube was once the only major online video service, so it makes sense that the company was also one of the first to experiment with live-streamed sports.

YouTube inked a deal with Major League Baseball in 2013 to livestream two games per day outside the United States and other major markets. The video site also hosted a monthly subscription service for the Ultimate Fighting Championship that same year. And last year, the Canadian Football League live streamed its playoff games on the site outside North America.

Overall, though, Google’s commitment to live sports has remained sporadic. The reason, of course, is money. “That is completely a business issue,” Google chairman Eric Schmidt said at a media conference in 2013. “I can assure you that if you wrote a large enough check for any sports event you wished, you can livestream it globally to everyone.”

Yahoo has been betting big on live sports as a way to attract large audiences amidst its ongoing struggles as a media-tech hybrid.

The Internet portal aired the first streaming-only NFL game last October, a matchup between the Jacksonville Jaguars and the Buffalo Bills. The game, played in London, aired at 9:30 a.m. Eastern time. It reportedly cost Yahoo a $20 million to air, but only attracted average viewership of about 2.4 million people globally. That’s more people than typically livestream the Super Bowl, but far off the television broadcast viewership for a typical Sunday game.

More recently, Yahoo announced plans to stream an MLB game every day this season and up to four NHL games each week. But as with TV broadcasting, blackout rules will prevent local fans from watching their home team online.

The world’s largest social network hasn’t signed a major deal with a sports league yet, but it’s probably only a matter of time. The company launched a new hub for sports scores and discussion just in time for the Super Bowl (though it suffered severe lag during the game), and Facebook was one of the companies bidding for the Thursday Night Football rights along with Twitter.

More broadly, livestreaming has become a new obsession for the company, which has given live video preference in users’ News Feeds and blasted out notifications whenever a friend or Page is broadcasting live. As CEO Mark Zuckerberg seeks out live content that people truly want to watch, professional sports feels like a natural fit. 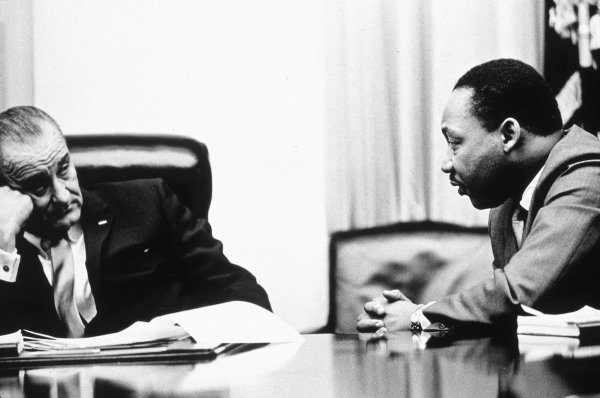 Why Martin Luther King Jr.'s Death Didn't Make the Cover of TIME
Next Up: Editor's Pick