How Obamacare Just Made Filing Your Taxes Worse

Nathan Nascimento is a senior policy advisor at Freedom Partners Chamber of Commerce.

It’s that wonderful time of year again: tax season. Some 150 million American businesses and individuals are expected to file taxes by this month, covering thousands of arcane provisions that determine how much you and your family will pay Uncle Sam and state governments this year.

But this filing season is the second in which Americans may have yet another—and bigger—tax bill to worry about: the one forced on us by the Affordable Care Act. It serves as a stark reminder of all the ways this law continues to harm American families and businesses, six years after it was signed.

While the Affordable Care Act’s tax increases are many, two are front and center this month: the individual and employer mandates. Both were supposed to increase coverage, but in reality they’re limiting career opportunities and taking more out of families’ and individuals’ wallets.

Start with the individual mandate, which is one of the most controversial provisions of the Affordable Care Act—and for good reason.

This mandate requires every American to be covered by a health insurance policy that complies with the law’s labyrinthine coverage requirements and restrictions. In 2015, for example, annual premiums for “low-cost” bronze plans obtained through the law’s exchanges averaged $2,484 for individuals and $12,420 for families with three or more children. If you don’t think this pricier insurance is worth the cost, or simply can’t afford it, you’ll likely face tax penalties upon filing your return.

That is money many families just don’t have. According to December 2015 estimates from the Kaiser Family Foundation, the average household without compliant coverage faces $661 in tax penalties for 2015, rising to $969 for 2016. The penalties are even higher for those not eligible to receive premium subsidies under the law: $1,177 for 2015, rising to $1,450 this year. While some will be exempt, millions of families and individuals will be penalized for not purchasing health insurance they cannot afford.

That’s a raw deal, especially as the Affordable Care Act has done nothing to lower insurance costs like its supporters claimed. In fact, a new study by my organization using the White House’s own data found premiums for employer-sponsored health plans—a widely-cited benchmark of health insurance costs—have actually risen faster since the law was signed. The only difference is now, families and businesses that can’t afford it will have to pay a tax instead.

And that’s just the individual mandate. There’s also the employer mandate, which is limiting career opportunities for workers across the country.

The employer mandate went into effect in 2015, forcing employers with 100 or more full-time employees to provide health insurance to most of their workers, and expanding to those with more than 50 employees beginning this year. Those that cannot afford the costs—which average $12,591 per employee for family coverage—face a tax penalty of either $2,000 or $3,000 per employee after the first 30 employees. So as an example, an employer with 100 full-time employees who can’t afford rising health-care costs could face over $100,000 in tax penalties.

That’s not an option for many employers struggling through a sluggish economy. For some, staying in business requires reducing the number of employees covered by the mandate. Worse for employees, the law defines “full-time” work at just 30 hours per week. Many employers—including in the public sector—therefore have no choice but to reduce “full-time” positions or cut hours to below 30 per week.

This isn’t speculation—it’s already happening. A New York Times report documented public school districts that began cutting hours as far back as 2014, while many community colleges and universities have done the same for adjunct faculty. As for the private sector, a 2015 survey by the Society for Human Resource Management found that one-in-five businesses have already reduced or plan to reduce part-time work thanks to the Affordable Care Act, while another 5% have or plan to lay off employees. As the employer mandate expands and its penalties continue to worsen, more workers will find it harder to start their careers.

Such is the result of a federal health-care law that favors government mandates and restrictions over patient choice and control. While the Affordable Care Act has failed to bend down the cost curve of health insurance, it has increased taxes on families and businesses alike. April 15 has been a dreaded date for decades—and it’s only getting worse. 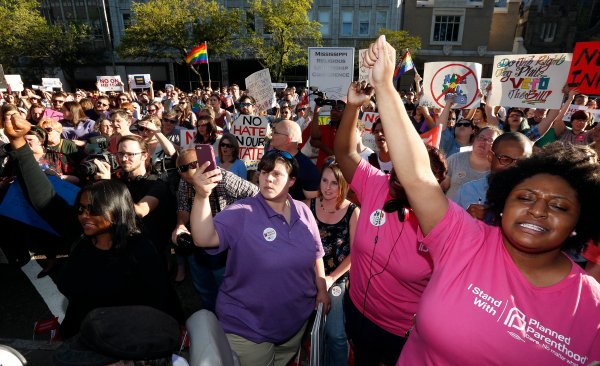 Mississippi's Anti-LGBT Bill Is Just Bigotry Disguised As Faith
Next Up: Editor's Pick