Omarosa Manigault, left, who was a contestant on the first season of Donald Trump's "The Apprentice" and is now an ordained minister, appears alongside Republican presidential candidate Donald Trump during a news conference on Nov. 30, 2015.
Timothy A. Clary—AFP/Getty Images
By Tessa Berenson

If you turn on cable TV news during the day, there’s a decent chance that Donald Trump is on. But when the Republican frontrunner can’t make it, he has a legion of surrogates to back him up.

There are the paid spokespeople for the campaign, but there is also a cadre of unpaid, unofficial pundits who the networks call when they want a pro-Trump voice onscreen.

“We are extremely grateful to those who appear on TV to voice their support of Mr. Trump and his candidacy, especially given the totally biased media and so called pundits who routinely malign Mr. Trump,” said campaign communications director Hope Hicks.

Take Omarosa Manigault. She doesn’t have an official position on Trump’s campaign and does not coordinate with them, but she’s known the businessman since she first appeared as a contestant on The Apprentice in 2004. (Before that, she worked in Bill Clinton’s administration, where People magazine reports she was fired from four different positions in two years.)

Omarosa’s dramatic stint on The Apprentice earned her the top spot on TV Guide‘s 2008 list of the “Top 10 Reality TV Villains,” but now she works as a pastor and teaches in the Executive Education Program and in the Executive MBA Program at Howard University School of Business.

That is, when she’s not appearing onscreen for Trump at what she estimates to be five to seven times per week.

“If I accepted all the requests I would be on TV seven days a week, three to four times a day,” Omarosa told TIME of her hectic schedule. But she knew what she was getting into when she decided to jump into the media circus because of her early days on The Apprentice. “This is actually par for the course,” she said. “I went from anonymous to famous because of Donald Trump. I’m not new to the Trump universe.”

On TV, Omarosa is often put in the position of defending her brash mentor. For example, in the face of increasing violence at Trump’s rallies, she told MSNBC’s Chris Matthews, “Donald can’t be responsible for every single person that comes to his rally. Listen, you have a right to go into a closed, private event and you get what is coming to you.”

But Omarosa says her purpose on TV is as Trump’s friend, to educate viewers about his real personality. “My role is really to tell Donald Trump’s truth in the face of all this false reporting, as well as to shine a little insight into the real Donald Trump,” she said. “Because he’s bigger than life, he tends to turn into a caricature.”

In a skit on Donald Trump’s comments about women, cast member Cecily Strong appeared as Hughes, saying, “As a woman, I like Donald Trump. But as a full-blown nut job, I freaking love him.”

Hughes told CNN she had a sense of humor about the sketch, but was also hurt by it. “Talk about the ultimate shaming, the ultimate sexism,” she said. “What does SNL want me to do? Be barefoot and pregnant, or maybe just talk about parenting issues?

Hughes got her start in the Tea Party movement and currently serves as chief political commentator for USA Radio Networks. She has made some controversial comments of her own on the TV circuit. After Trump predicted in March that there would be rioting if the nomination were taken from him at a convention, Hughes appeared on CNN and said that could be what the country needs.

“Riots aren’t necessarily a bad thing,” she said, according to The Hill. “[Not] if it means it’s because [Trump supporters are] fighting the fact that our establishment Republican Party has gone corrupt and decided to ignore the voice of the people and ignore the process.”

Andrew Dean Litinsky, better known as Andy Dean, also seemingly defended violence on TV for Trump. The Harvard grad is another former Apprentice contestant who went on to run Trump Productions LLC, then become a talk show host and political commentator. He has lately also been one of the on-air voices for Trump (he declined to comment for this story).

In March, a black protester was punched in the face at a Trump rally in North Carolina by a 78-year-old white man, who was charged with assault. Dean went on CNN the following day and defended the Trump supporter. “That guy’s 78 and throwing a punch like that,” Dean said. “At his age, we must say that that is very, very interesting… [Donald Trump] can’t control a 78-year-old man, and at that age, it looks like good exercise.”

Omarosa, Hughes and Dean aren’t Trump’s only loyal TV foot soldiers; there are also people like Jeffrey Lord, a former Ronald Reagan White House staffer who says Trump offered his name to CNN as someone who would defend him, Vox reports. Lord now appears on CNN almost every day. Or Kayleigh McEnany, a young Harvard Law graduate who started as an intern in the George W. Bush White House and went on to work on Mike Huckabee’s show on Fox before pivoting to her own television career.

But reigning over all of these pundits is Katrina Pierson, arguably the master of Trump television hits because she actually has a paid position in the Trump campaign. She’s Trump’s official national spokeswoman.

Pierson says she receives daily talking points from the campaign and that Hicks, the communications director, approves all appearances. Pierson says she appears on television on average three to six times per day, plus radio hits.

“I personally knew taking on the Establishment at this level was going to be tough,” Pierson told TIME about her decision to join the campaign. “I was not kidding myself about that. But I also know that this is a necessity.”

Pierson has had a checkered political past, Politico reports: the Texan is a former Democrat who voted for Barack Obama in 2008, then became what she calls “one of the original founders” of the Tea Party Movement, working for Ted Cruz up to his election in 2012 and then running her own failed congressional bid against Texas Rep. Pete Sessions in 2014.

Pierson has an arrest on her record from shoplifting at age 20 in 1997, and she’s prone to outlandish statements and antics. In December, she caught flack for appearing on television wearing a necklace made out of bullets, for example, and she’s had to defend this tweet of hers from 2012:

Now she’s also starring on a new reality television series on WE tv called Sisters in Law, about a group of black female lawyers in Texas.

Pierson may have known what her job would entail, but like anyone else who defends Trump on a national platform, she struggles with the personal insults, whether they be in the form of nasty tweets or unflattering impersonations a la Scottie Nell Hughes.

“Everyone on the campaign receives all types of attacks,” Pierson said of being a public face for Trump. “There aren’t words to describe the level of hate and vitriol from your own party that’s being leveled at Mr. Trump and his campaign and his staff.” 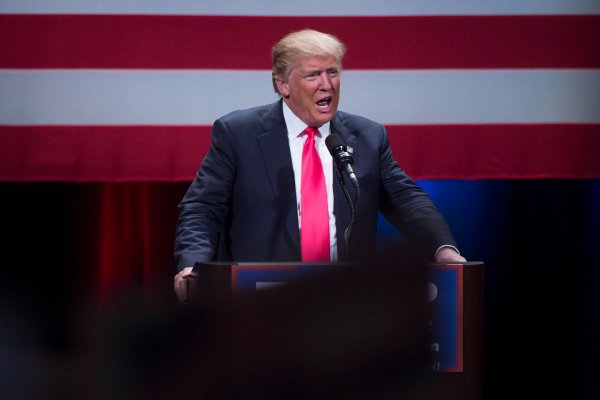 Trump Explains How He'd Pay for a Border Wall
Next Up: Editor's Pick