Between the World and Me author and MacArthur Genius Ta-Nehisi Coates revitalizing the world’s first black superhero is easily the biggest thing to happen to the world of comic nerdom in years.

This isn’t the first time a famous writer has taken on a comic book—SNL alumni Seth Meyers and Bill Hader, for instance, co-wrote a Spider-Man comic—but plenty of people will be perusing Black Panther for Coates’ meditations on social justice.

Marvel says the first issue of Black Panther has already sold 300,000 copies. (To put that number into context, Marvel’s best-selling “event series” usually sell around 100,000, and its controversial female Thor first issues sold 200,000.) The character makes his big screen debut in Captain America: Civil War next month before getting his own picture—the first Marvel Studios film with a black superhero at its center—in 2018.

Soon everyone will know the name T’Challa—African king, brilliant scientist and superhero who goes by Black Panther. Marvel Editor-in-Chief Axel Alonso spoke with TIME about what Coates’ fans who are new to comic books need to know about the character, how the comic will tackle race and gender and what we can expect from the Black Panther movie, helmed by Creed director Ryan Coogler.

TIME: How does Black Panther fit into the history of Marvel?

Axel Alonso: Black Panther is the first black superhero. He was introduced in 1966 in Fantastic Four, and he promptly kicked all four of their butts. He’s been an Avenger. He’s had his own title throughout the years since the 70s. And he is a superhero who has no superpowers. He’s just smarter, stronger and better than everyone else.

He presides over a kingdom called Wakanda, which is a fictional African kingdom. In a sense, they’re a dream of an Africa that was unfettered by colonials and just prospered in its own way. In the Marvel Universe, it’s the most advanced society, technologically speaking. It has a resource called Vibranium, which is a metal, the same metal Captain America’s shield is made out of. But they’re technologically lightyears above everyone else and T’Challa himself is a genius.

How did Ta-Nehisi Coates come to write this series?

We had cast a wide net for a writer when Ta-Nehisi interviewed one of my editors, Sana Amanat, at Atlantic Talks. And it was at that meeting that we learned that he read comics regularly, and they influenced his writing. So at that point, we swooped.

And we didn’t go to him specifically about Black Panther. We reached out to him and talked to him about what characters he liked. That’s the point at which my editor Wil Moss, who was casting for Black Panther, said, “Look I’m interested in Ta-Nehisi, how do you feel about that?” And I said, “Absolutely, go for it.”

He wrote a wonderful pitch that really hit us in the gut. He said look, would Wakanda, such a technologically and spiritually advanced society, abide a monarchy.

Now, this was before Between the World and Me was published and became the National Book Award winner—also before he won the MacArthur Genius Grant. This preceded all of this.

There are going to be non-comic book fans reading this comic because they’re fans of Ta-Nehisi Coates. Did you have any concerns as to how to give those people access to the world of comic books?

If you pick up Black Panther #1, it’s an easy jumping on point for someone who doesn’t know the Black Panther. It’s almost like you started this season of television show: you jump in and slowly start to understand the world in which you’re being placed and the character himself.

Obviously when you hire someone like Ta-Nehisi you expect that he’s going to bring a point of view to the table. But he’s been the first to explain that there’s a world of difference between his book and his comic book. He knows that the things that concern him will manifest in his writing, but first and foremost it’s a big adventure.

What would you say that worldview is?

This is very much about a homegrown revolution that’s taking place in the kingdom that the Black Panther presides over, and that will cause him to question everything he stands for.

If you’re going to be writing a book or producing a movie in which you have a black character dressed head-to-toe in black whose name is Black Panther, people will come with an expectation. But that’s true of all characters: You do the same thing for Captain America, a character dressed in red, white and blue.

To my understanding Jack Kirby and Stan Lee actually came up with the name before the Black Panther [Party’s] existence. And they originally called him The Coal Tiger, but they thought the name Black Panther sounded a lot cooler.

Marvel has made headlines in the past two years for its increasingly diverse heroes.

We pride ourselves recently on the diversity of our offerings. The characters we’ve had from Miles Morales, the African-American-Hispanic Spider-Man, to Kamala Khan, a female Muslim superhero, to the Korean Hulk and the fact that Thor’s a woman. We have a really diverse array of superheroes right now, and we’ve diversified with our talent as well. I think that Black Panther is one more step toward that goal.

Coates’ version of Black Panther deals explicitly with issues of race, gender and sexuality. I think a lot of people who’ve never read comic books might be surprised by how political it is.

Since the late 80s, comics frequently have tackled the big questions through metaphor. If you look at Civil War [the series that’s being turned into a Captain America film] that was about the Patriot Act. That was about the scars of 9/11 on the American consciousness and what level of freedom we’re willing to give up for more security.

I think the people coming to Black Panther who are fans of Ta-Nehisi won’t be disappointed. It’s not as if he turned off that part of his brain to write this comic book. Ta-Nehisi has talked a lot about how gender is a very important topic in this story, maybe more so than race.

What was the reaction of Black Panther fans when you made the announcement Ta-Nehisi Coates would be writing the series?

Tremendous. Any number of announcements that we’ve done that have been successful have been met with cynicism and anger with the first wave. The response to the female Thor, for instance, the first wave was negative until people came out of the woodwork, supported it, and she became a hit. With Black Panther, this was one of those rare occasions where people were very excited about it.

What was the most surprising thing about working with Mr. Coates?

We took a gamble with Ta-Nehisi. Any time you get behind a prose writer, it’s like a tightrope walk. The road is littered with prose writers who didn’t make it, that weren’t able to transition their skills to this medium. But Ta-Nehisi is a self-described comic book geek. And he said on countless occasions that comic books are very influential in his writing. So he adapted quickly. He understood the rhythm and pacing of the page.

The second thing I would say is that we had high expectations for the sales of this book, but it sold more than 300,000 copies, and it’s the No. 1 book for the month it’s going to launch. It will be one of the best-selling comic books of the year.

How do you think the books will affect interest in Captain America: Civil War, in which Black Panther will make his onscreen debut, and in the Black Panther movie?

It’s safe to say the Panther’s Q rating is about to go through the roof. Just the same way that so many people didn’t know who Iron Man was until Robert Downey Jr. slipped on that metal outfit. I think we have a one-two punch going on here.

What’s the relationship between the comic book and what’s onscreen?

Part of the success of Marvel Studios is its respect for the source material and what we call the “essential truth” of the characters—the things about those characters that make them unique. I have seen Civil War, and I think what Marvel Studios has done with T’Challa is very faithful to the source material. They mine aspects of the best runs of the character to deliver a character that’s fully formed on the screen. But there was no communication between the Studios and Publishing when Ta-Nehisi Coates was writing.

Coates has cited Creed director Ryan Coogler as inspiration for how to turn an old story into something new and relevant, like Coogler did for the Rocky saga. Now, Coogler is directing the Black Panther film. How much of Coates’ sensibility do you think will make it to the onscreen Black Panther?

Having seen Creed and Fruitvale Station, I was thrilled to hear that Coogler was going to direct the film. He’s a unique voice. I’m from the Bay Area, by the way, and he just absolutely nails the Bay Area in Fruitvale Station—the clothing, the way that the protagonist in the film dresses is exactly the way I dressed in that area. I’m Hispanic, you know? The attention to detail and the point of view that comes through, you have a unique filmmaker at the top of his game who has something to say in this film.

The same with Ta-Nehisi. You have a journalist-turned-writer at the peak of his powers who is embarking on a fiction career in a form that people never would have expected him to entertain doing. I guess we know something about what we’re doing here, you know?

You spoke about how Coates and Coogler both have a unique point of view. Why do you think it’s important for pop culture–for comic books that could just be good guys punching bad guys—to have a point of view?

And I think if you take a look at Marvel Studios, what they’ve managed to do is treat every single movie like it has its own tone and feel and to a certain extent each is reaching a different type of audience. Guardians of the Galaxy is very different from Iron Man which is very different than Captain America, and they treat each like its own genre. So, you know, ultimately all the best stories have something unique to say.

How many issues is Mr. Coates writing?

His first story arc is 11 months of publishing, but he’s staying on after that. We’ve talked about other things as well that he is interested in.

We talked with Ta-Nehisi before he was the cultural phenomenon that he is, and he could have left. And he stuck around, and he intends to stick around for the foreseeable future. 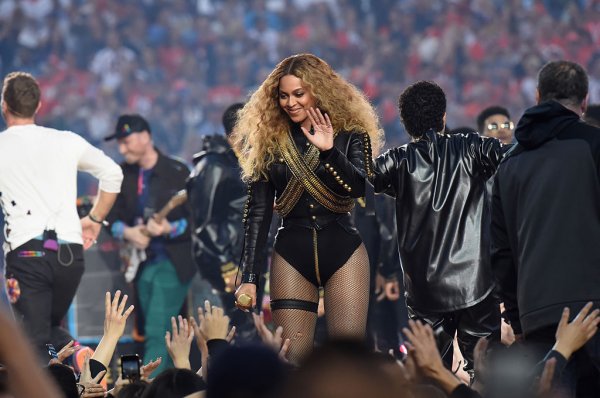 Beyoncé Sues Company Behind 'Feyonce' Merchandise
Next Up: Editor's Pick