In a bid to maintain its distinctive place in the Union (a position often defined by bigotry and extremism), the Mississippi legislature recently passed House Bill 1523, the “Protecting Freedom of Conscience From Government Discrimination Act.” With tortured language that would make George Orwell cringe, the bill allows business and government to deny services based on “sincerely held religious beliefs.” Private businesses and faith-based organizations, if Governor Phil Bryant signs the bill into law, could refuse to serve members of the LGBT community. County clerks could deny them marriage licenses. All in the name of something strangely called religious freedom.

Mississippi is not alone. At least 10 states have passed or considered some version of the bill in response to the U.S. Supreme Court decision to legalize same-sex marriage. North Carolina’s law was thought to be the most egregious. But Mississippi refuses to be outdone.

The scope and breadth of the proposed law give license to discriminate in the name of religion without fear of legal sanction. Fall outside the bounds of what some believe to be traditional marriage between a man and woman, get divorced, or have premarital sex, extramarital sex, sex with more than one partner at a time, and you could easily be denied a job, fired or refused service at your local convenience store. As Mississippi Representative Christopher Bell, a Democrat from Jackson, said: “It’s an open container for discrimination across the board.”

Mississippi is a place of extremes—in its beauty and in its hatreds. I grew up there on the Gulf Coast, in a small town where Spanish moss dangled from old magnolia trees with brilliantly white blossoms. In Moss Point, where I am from, the oppressive summer heat slowed the pace of living, and the smell of Ms. Knight’s barbecue pit made your mouth water as you wiped the sweat away. There’s something beautiful about the dirt roads, the tall pine trees, the fields of white cotton in the Delta, and the various smells and sounds of southern living: the popping of hot grease as someone fries fish outside or the sound of Bobby “Blue” Bland as friends drink brown liquor. Mississippi is a blues-soaked state. You can hear it everywhere.

Ghosts are everywhere, too. Something about Mississippi grieves with every passing day. Its dead still haunt. Drive down D’Evereux Drive in Natchez, Mississippi, and you will find yourself traveling along what was once known as “The Forks of the Road,” one of the most vibrant and brutal slave markets in the south. Always, just beneath the surface and slightly out of sight, lies the ugliness and violence of our past that shadows everything we do. Mississippi led the nation in lynchings between 1883 and 1959. Citizens Councils and the State Sovereignty Commission legally sanctioned the brutal maintenance of segregation in the state. And these weren’t just folks in white sheets. They wore business suits and regularly attended church.

In 1964, the Council of Federated Organizations (COFO), a coalition of national and regional civil rights groups working in Mississippi, issued a report about the Mississippi Legislature. They noted “the large number of anti-civil rights bills and other bills of a racial character” in that year’s legislative session.

One bill in particular stands out. House Bill No. 180 sought to provide prison terms or sterilization for parents of illegitimate children. The final bill signed into law removed the sterilization clause and reduced the penalty to a misdemeanor. Nevertheless, Mississippi criminalized illegitimacy. The motivation for the bill was a so-called moral concern over sex outside the bounds of marriage. Such acts had to be policed and punished. Religious piety demanded as much.

The true motivation was something more insidious. The Jackson Clarion-Ledger reported that, during the floor debate, Representative Meek of Webster County “cited that there were 8,467 illegitimate non-white births in the state in 1962 and 444 illegitimate white births.” Meek said: “The State of Mississippi is subsidizing illegitimacy through welfare payments, and that the moral structure has completely broken down in some segments of society.”

But this bill isn’t about anti-discrimination. The reasoning is all too familiar. We see it in the obsession about the sexual lives of black and poor people informing HB 180 in 1964. This isn’t about religious freedom, either. It is bigotry draped in the garb of religion. Plain and simple. And it should be fought with all of our political and moral energy.

It would be too easy to say that this bill is just another example of the backwardness of the state of Mississippi—of the ugliness of the south generally. But Mississippi is a metaphor for America. It is and has always been that. The state simply exaggerates tendencies found elsewhere in the country.

What is clear is the narrowness and mean-spiritedness of those who support such a bill. And they aren’t alone. We hear it in our political discourse everyday. I am reminded of the powerful words of the American philosopher William James: “A mind too narrow has room but for one kind of affection.” This affection is often given the name of religious piety. But piety is the mask. Hatred is its true name. And we must expose those who embrace hatred for who and what they are. 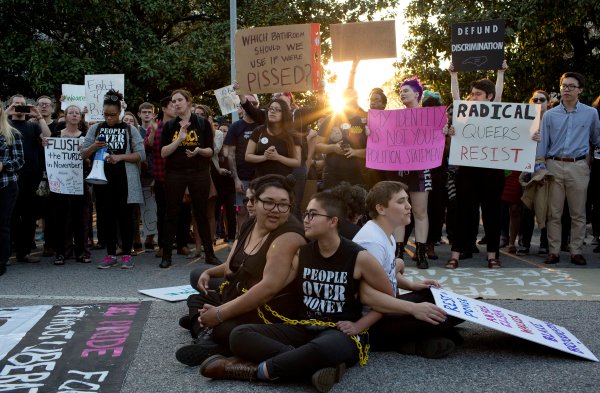 North Carolina Is Attacking My Basic Rights as a Transgender Man
Next Up: Editor's Pick