Review: The Amazon Tap Will Leave You Wanting More

The bad: Tap is missing what makes Alexa magic

Who should buy it: People looking for a Bluetooth speaker with a twist

The Amazon Echo, an Internet-connected smart speaker that can answer owners’ verbal questions and requests, has quietly become one of the hottest gadgets of the past few months. And with the arrival of the new Tap and Dot Amazon is taking the Echo’s smarts, powered by a Siri-like software called “Alexa,” and packing them into two new form factors.

The Tap is a smaller, mobile version of the Echo, whose power cord keeps it stuck indoors. The Dot is meant to connect to your existing sound system, bringing Echo’s smarts to the speakers you already own.

Both devices function almost identically to the Echo. And both are compatible with all the great third-party apps (called “skills”) that already exist for that device. But the Tap and Dot are two very different gadgets.

Here’s what it’s like to use the Amazon Tap. See my Amazon Dot review here.

A six-inch, battery-powered portable speaker, the Amazon Tap is an innovative entry into the crowded portable speaker category. But what sets Tap apart — other than its $129 price tag — is Alexa, and not a whole lot else.

With both Bluetooth and Wi-Fi connectivity, Tap can either get music directly from your home’s Internet connection or stream it from smartphones and tablets. When it’s connected to the Internet directly, you can use it to access Alexa’s skills. But once you take it out of Wi-Fi range — to a park, for example — the smart speaker goes dumb.

Outside of Wi-Fi range, it can still connect to your devices using Bluetooth. But so can many other less expensive and better sounding speakers. Amazon does say Tap can connect to mobile hotspots, but I can’t imagine many scenarios in which that would be very helpful.

To ask Tap a question or make a request, users press the microphone button on the speaker’s front. Lights and a chime indicate the Tap is listening. In a world before the always-listening Echo, this push-to-talk control would have been great. But now it’s not enough. Using Echo feels magical because talking to it is like speaking with a human — and you don’t need to press a button to talk to your friends or family.

The seamless voice control on Amazon’s Echo stole ground from Apple, whose Siri voice assistant has yet to offer an equivalent experience. Tap gives some of that ground back. iPhones have “Hey Siri,” which lets people make requests without holding down the device’s home button. Echo’s far-field voice recognition uses seven microphones to pick up your questions from a room away, even while music is playing. Tap, meanwhile, will only hear you if you push its button. It’s a shame that Amazon didn’t integrate voice recognition into Tap’s charging cradle, at least.

Neither rugged nor high-end, the 16-ounce Tap was built to be mobile. It comes with a rubber sleeve that is intended to protect the device, though puzzlingly it leaves the majority of the fabric speaker grill exposed and susceptible to damage. And “Tap” itself is a misnomer, since the speaker has rubber-covered buttons, not touch-capacitive buttons found on the flashier tech these days. “Amazon Press” or “Amazon Push” is more like it.

For shoppers who balk at the Echo’s $179 price, Tap is a more modestly priced substitute. But it will only make them wanting more. For someone wanting a better-than-average Bluetooth speaker, Tap, with flat, muddy audio quality, isn’t quite good enough. 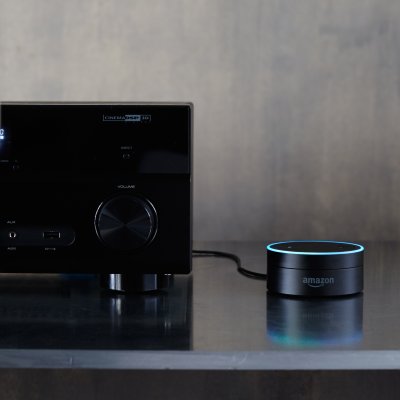 Amazon's New Gadget Turns Your Speaker System Into An Echo
Next Up: Editor's Pick