These Nine Presidents Were Nominated at Contested Conventions

As we watch the battle for the gaining of the majority of delegates at the 2016 Republican National Convention in Cleveland in July, among Donald Trump, Ted Cruz, and John Kasich, history tells us that nine future Presidents had to overcome front runners on the first and later ballots at their national conventions.

William Henry Harrison was not the front runner in the 1840 Whig National Convention, but defeated the great political figure, Kentucky Senator Henry Clay, on the 5th ballot, and then went on to serve one month before dying, causing great dismay to Clay, who then battled with Vice President John Tyler, not even a Whig, but succeeding to the Presidency upon Harrison’s death.

James K. Polk trailed former President Martin Van Buren in the 1844 Democratic National Convention, but went on to win the nomination on the 9th ballot and become the “expansionist” President who gained the most territory for America since the Louisiana Purchase under Thomas Jefferson.

Franklin Pierce trailed former 1848 Democratic nominee Lewis Cass in the 1852 Democratic National Convention, but went on to win the nomination on the 49th ballot, and become the President who caused more of a split in the nation than anyone could imagine, with the signing of the Kansas Nebraska Act of 1854, which destroyed the Whig Party, divided the Democratic Party, and created the Republican Party.

Read More: This Graphic Shows What Happened at the Last Real Brokered Convention

Abraham Lincoln trailed New York Senator William Henry Seward in the 1860 Republican National Convention, but went on to win the nomination on the 3rd ballot, and made Seward his Secretary of State, crucial to the success of the Union during the Civil War, as Seward worked with Charles Francis Adams, Ambassador to Great Britain, to keep that nation neutral, rather than support the Confederate States of America.

Rutherford B. Hayes trailed James G. Blaine in the 1876 Republican National Convention, but went on to win the nomination on the 7th ballot, and became the most contested Presidential winner until George W. Bush in 2000, as both failed to win the popular vote against their Democratic opponents, but won the Electoral College through intervention of the Supreme Court partially in 1876 (five members of the Electoral Commission), and 2000 through a majority vote of the entire Supreme Court.

James A. Garfield trailed former President Ulysses S. Grant and James G. Blaine in the 1880 Republican National Convention, but went on to win the nomination on the 36th ballot, and then, tragically, had the second shortest term of any President, being mortally wounded by an assassin after four months in office, and suffering terribly for two and a half months until his death in September 1881.

Benjamin Harrison trailed Senator John Sherman of Ohio in the 1888 Republican National Convention, but went on to win the nomination on the 8th ballot, and although losing the popular vote, won the Electoral College majority over Democratic President Grover Cleveland.

Woodrow Wilson trailed Speaker of the House Champ Clark of Missouri in the 1912 Democratic National Convention, but went on to win the nomination on the 46th ballot. Although only winning 42 percent of the national popular vote, Wilson was the beneficiary of the Republican Party split caused by former President Theodore Roosevelt running for President against his own chosen successor, President William Howard Taft, with Roosevelt’s Progressive (Bull Moose) Party having the best third party performance in American history, with 27 percent of the popular vote, 88 electoral votes, and six states won in the Electoral College, and ending up second, rather than third.

Warren G. Harding trailed Major General Leonard Wood of New Hampshire, Illinois Governor Frank Lowden, and California Senator Hiram Johnson on early ballots at the 1920 Republican National Convention, but passed them by and won the nomination on the 10th ballot, and went on to be regarded as the worst President of the 20th century.

Looking back at these nine Presidents, we can summarize that three became regarded as among the more successful Presidents (Polk, Lincoln, Wilson). Two (Harrison and Garfield) had tragically short terms as President. Two (Hayes and Harrison) are seen as below average, and two (Pierce and Harding) are seen as failures, in the bottom five listing of all Presidents.

So we have had nine Presidents, about one out of five, who had to battle for the nomination of their party, and we had such politically prominent figures as Henry Clay, Martin Van Buren, Lewis Cass, William Seward, James G. Blaine, Ulysses S. Grant, John Sherman, Champ Clark, Major General Leonard Wood, Frank Lowden, and Hiram Johnson who had the most or more delegates, but not enough to be the nominee, and saw their lead wither away.

This list includes two former Presidents (Van Buren and Grant) and three Presidential nominees at other times (Clay, Cass, and Blaine) who failed to be nominated despite their leads in delegates. The two former Presidents had known the glory of victory, and took the reality of defeat in a dignified manner. Lewis Cass and Henry Clay had been nominees at other times, and Clay would again be the nominee four years after being denied the nomination in 1840. James G. Blaine, after two rejections, ended up as the party nominee the third time that he sought the nomination, in 1884.

William Seward, John Sherman, Champ Clark, and Hiram Johnson had other successes and significance that make them stand out in American history, and took party rejection with their heads held high. Major General Leonard Wood undermined his own front runner candidacy in 1920 when he supported the Palmer Raids (the First Red Scare), scaring civil libertarians. Frank Lowden, in the same election year, weakened his own candidacy by charges of profligate spending, an interesting comparison to the vigorous debate over Citizens United in the present political atmosphere. However, he tried again for the nomination of his party in 1928, and again failed to be the nominee, over heavy favorite Herbert Hoover.

All of this group of front runners who lost out at their party conventions understood the rules of the conventions, and none of them spoke up, threatening riots and violence if they did not win the party’s nomination, as Donald Trump has sadly done. These were all experienced political leaders who had distinguished careers, with the exception of Wood who had a significant career in the military, and they knew how party politics worked, and they did not come into the conventions with the attitude of entitlement. They were all gracious in defeat, and did not work to undermine the party apparatus, and were loyal to their party and its future.

The present controversy regarding Donald Trump, if he falls short of the required 1,237 delegates at the Republican National Convention this July, is based on the fact that despite him winning the most delegates so far, he is seen as outside the mainstream of Republican and conservative ideas and philosophy. While it is true that he has won his support in modern day primaries and caucuses, which did not exist, except on a small scale in the time of Woodrow Wilson and Warren G. Harding, the point has been emphasized that never before have we had a nomination battle in a political party with as many as 17 candidates, which has made it possible to win primaries and caucuses and gain delegates based on only 30-40 percent of the vote, skewing delegate totals. Donald Trump has never won a majority of the vote in any primary or caucus until recently when the number of candidates dropped dramatically. A majority of Republicans — nearly two thirds — say they are hostile his nomination. And since Trump would be only the second totally nongovernment nominee (after Wendell Willkie in 1940) ever to run for President, there is, understandably, great reluctance to allow him to utilize his reality television career to be granted the nomination. With his clear challenge to the party’s principles, it’s no wonder party regulars are insisting that he win 1,237 or more delegates on the first ballot or they’ll open the Republican National Convention to a nominee who fits their historic perspective on government affairs. This would assure that the Republican convention in Cleveland would be the most tumultuous one since the Democratic convention in Chicago in 1968.

Ronald L. Feinman is the author of Assassinations, Threats, and the American Presidency: From Andrew Jackson to Barack Obama (Rowman Littlefield Publishers, August 2015). 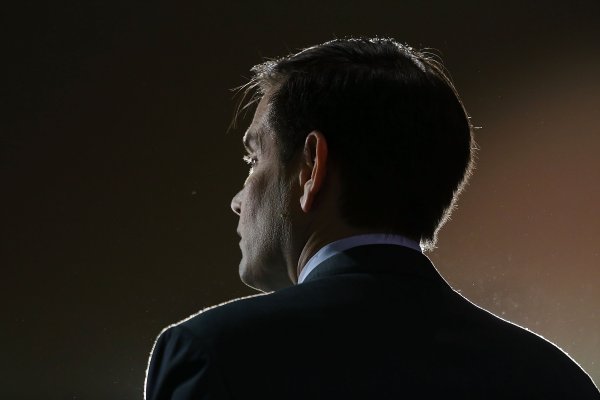 Rubio Makes Wants to Keep Delegates at GOP Convention
Next Up: Editor's Pick