The Beginning of the End of Donald Trump

Sex. The downfall of many a great man. And some bad ones, too. This week, Donald Trump became the latest.

After a campaign dominated by behavior so boorish that Trump bragged he could literally get away with murder, the orange-haired brand licensor has finally gone too far. He has embarrassed his supposed party with a nonsense stance on abortion, initially stating that women should be punished. He’s kept his campaign manager on staff after an assault that left a female reporter with bruises. And he’s engaged in a disgusting wife-off with Ted Cruz.

This has to be the beginning of the end, the driving of the stake into a powerful and decisive general election narrative: Donald Trump hates women. It’s a narrative that can’t be undone, walked back or overtaken by uttering yet another more shocking statement meant to distract from the last. And women hate him right back.

So much damage has been done that nothing else will really matter if this basic fact holds: almost three-quarters of women voters dislike Trump. And if they don’t like him, they probably won’t vote for him, meaning there’s no mathematical path by which he could be a victorious candidate even if he manages to get the nomination. Being repellent to women is losing strategy: more women vote than men, to the tune of an estimated four to seven million more votes than men in recent elections.

While Trump’s misogyny certainly isn’t new, his comments on the most hot-button social issue in the country succeeded where millions of dollars of anti-Trump spending failed: by unifying the right and the left against his candidacy. He cannot seem to stop himself from coming undone on virtually every front.

Last week Trump wouldn’t disavow using nuclear weapons—even in Europe. He suggested South Korea and Japan obtain nuclear weapons in place of long-standing and successful American security alliance in Asia. “The person who made the statements doesn’t know much about foreign policy or nuclear policy or the Korean Peninsula or the world generally,” President Barack Obama said Friday at the Nuclear Security Summit.

Then there is the utterly revealing—and duly bizarre—interview with The Washington Post’s Bob Woodward in which Trump foretells a “massive recession” but claims he’d be able to eliminate the debt as president.

Trump knows as little about the abortion debate as he does about foreign affairs, immigration policy, economics, and the nuclear triad—or basically anything. He was calculated as uttering factually inaccurate statements every 5 minutes. His few policy prescriptions—such as unleashing more nuclear weapons in the world and pulling back from NATO and the Geneva Conventions—aren’t even to the level of a dorm-room philosopher.

In the near-term, Trump is stumbling in Tuesday’s Wisconsin primary. Ted Cruz already surpassed him in recent polling—and that was before Trump’s terrible week. If Trump loses out on the majority of Wisconsin’s 42 delegates, it’s pretty much impossible for him to hit the necessary 1,237 delegates to avoid a contested convention where he would be pitted against Cruz’s vastly superior organization.

That is the empirical reality. How the Republican party chooses to address it is another question entirely. Trump’s own playbook portends that the end is near. (“The worst thing you can possibly do in a deal is seem desperate to make it,” Trump wrote in The Art of the Deal. “That makes the other guy smell blood, and then you’re dead.”) Trump met with the power brokers at the Republican National Committee, and RNC chairman Reince Priebus reportedly outlined about the nuances of delegate selection. On Sunday, Priebus said there would be “consequences” for Trump’s claim that he might not support any eventual nominee who isn’t himself. After months of unstoppable momentum, Trump finally needs the party more than it needs him.

In the end, though, it’s the anti-woman pathology—and it’s pathological—that will bring Trump down, no matter how effectively he’s able to woo party brass. Here’s how he put it in 1997: “There’s nothing I love more than women, but they’re really a lot different than portrayed. They are far worse than men, far more aggressive.” Against him, in this election? Yes, far worse.

Plenty of men in public life, especially in Republican politics, have their gender issues. But I’ve never observed a man in the public sphere who openly holds such contempt for women as Trump, who always makes it about looks and sex.

That’s why I find the turn of events slightly hopeful. As repulsive as the spectacle has been, Donald Trump being taken down by his own misogyny counts as a rare occasion of actual human progress. Unlike every other instance when outrage appeared to take him out of the race, I do believe the damage is real this time. Americans can tolerate and even lionize leaders who are innovative racists or jerks—Henry Ford and Steve Jobs come to mind—but they’re not nearly as receptive to authoritarians who strip away their hard-won freedoms.

Donald Trump has been an effective national bully—of the disabled, of Mexicans and Muslims, of strong women like Carly Fiorina, Megyn Kelly, and Michelle Fields—for the duration of his almost year-long candidacy. Through the fall and the winter, it appeared that no one could stop him. Now, at long last, it looks like he’s being thwarted by the only person capable of doing so: himself. 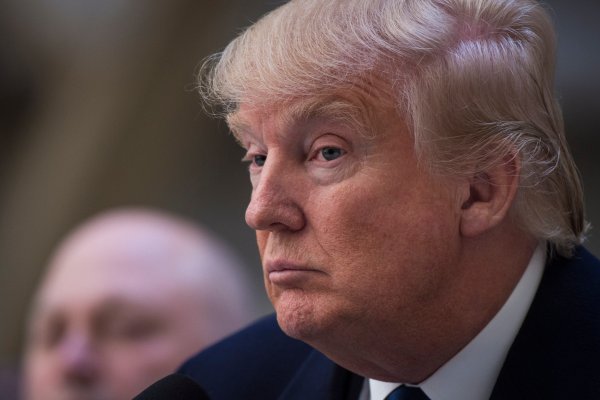