President Obama and Chinese President Xi Jinping agreed Thursday to cooperate against the threat of a nuclear North Korea. The two leaders found the common ground on the sidelines of a summit in Washington where more than 50 world leaders have gathered to discuss nuclear security.

“President Xi and I are both committed to the denuclearization of the Korean Peninsula and full implementation of U.N. sanctions,” Obama said Thursday, according to a White House statement. “We’re going to discuss how we can discourage action like nuclear missile tests that escalate tensions and violate international obligations.”

Washington and Beijing both helped negotiate the stringent U.N. sanctions on Pyongyang, which were approved in March after the hermit kingdom provoked international concern with nuclear and missile tests.

Obama also met with South Korean President Park Geun-Hye and Japanese Prime Minister Shinzo Abe, saying: “We are united in our efforts to deter and defend against North Korean provocations.” 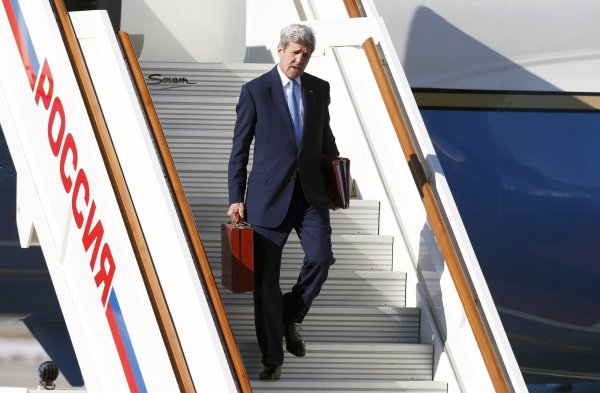 Vladimir Putin Pokes Fun at John Kerry for Carrying His Own Luggage
Next Up: Editor's Pick