Frank Gehry Remembers Zaha Hadid, Who ‘Found Her Niche and Went With It’

When news broke on Thursday morning that architect Zaha Hadid had died, she was quickly mourned by a trio of her peers: Frank Gehry and Joseph Giovannini sat together over breakfast and called Robert A.M. Stern to have a group cry.

“We just loved her,” Gehry tells TIME. “We’d just seen her a few weeks ago at Yale,” where he and Hadid were teaching concurrent studios. “It’s one of the things we do—we time them so we’re all together at Yale at the same time so we can sort of hang out.”

At the time, he says, Hadid didn’t seem to be feeling well. “She was having trouble walking, a little bit of difficulty, but nobody thought she was at a breaking point.”

Gehry had had a close rapport with Hadid since her early days in architecture, and was even part of a group that helped her get one of her first big commissions: the Vitra Fire Station in Germany. “She did an extraordinary job with it,” he says. “Everybody was impressed, and she took off.”

From the beginning, Gehry says “she was one of the guys” in the notoriously male-dominated architecture community. “[That’s] sexist in its own way I suppose. I don’t mean it that way,” he says. His point: “She was undaunted by all the stuff that would be against a woman coming into a field at that level. She didn’t pay attention to it … She was very confident.”

Through the years of what Gehry describes as a loyal friendship, they would complain to each other about the trials and tribulations of their field, which he says “has its problems these days, or maybe it’s always had its problems.” But he sees Hadid’s work as a triumph. The kind of architecture she become known for was “not sought after a lot, and then she made it sought after. She created the niche and she went with it. She was up to it, and she made a lot of buildings.”

According to Gehry, one of Hadid’s great strengthswas that she “created a language that’s unique to her,” the architect says. “I suppose it’ll be copied, but never the way she did it,” he adds. Gehry hopes someday to visit some of the more far-flung buildings she designed that he’s never had the chance to see before. But the one that most recently “knocked his socks off” was the London Aquatics Centre Hadid created for the 2012 Summer Olympics, which they attended together.

“I sat with her and watched it all functioning,” he says, and he told Hadid “it was so beautiful and fit so nicely, and I thought it was right on the money, perfect.” Her response? “She just smiled a knowing smile.”

Hadid will be missed in the architectural community where she was “incredibly loved,” as Gehry describes her. “In fact,” he says, “I can’t wait to get everybody together and just get drunk some night and talk about her.” 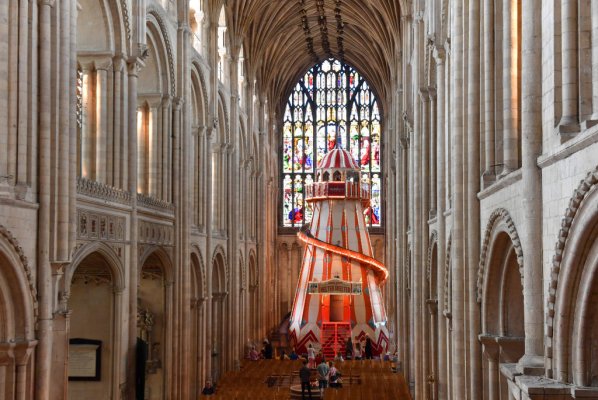 This Cathedral Built an Entire Fairground Ride Inside
Next Up: Editor's Pick