JFK’s Grandson: We Need Courage on the Refugee Crisis

Dannel Malloy smiles as he thanks supporters at the State House in Hartford, CT, on Nov. 5, 2014.
Charles Krupa—AP
Ideas
By Jack Schlossberg

Governor Dannel P. Malloy, who welcomed a family of Syrian refugees into his state after another had turned them away, is the recipient of the 2016 John F. Kennedy Profile in Courage award.

In Profiles in Courage, my grandfather, John F. Kennedy, praised leadership that put country above party, elevated principles over petty politics and promoted progress before personal interests. Governor Malloy, who boldly condemned the hateful, xenophobic rhetoric that swelled into a chorus last fall, fits that description.

A modern profile in courage, Governor Malloy upheld the vision of America described by then-Senator Kennedy in a different book. In A Nation of Immigrants, Kennedy wrote: “This country has always served as a lantern in the dark for those who love freedom but are persecuted, in misery, or in need.” Governor Malloy fulfilled this American promise for the brave Syrian family that risked everything to come to this country.

As half of U.S. governors, leading presidential candidates and countless others across the country voice support for a ban on any and all Syrian refugees from entering the United States, a new chapter in America’s exclusionary past has unfolded.

Throughout history, groups of Americans have attacked immigrants who fled danger and destruction at home and arrived in America hoping for the opportunities those of us born here are lucky enough to enjoy.

If the Kennedys had been barred from entering America after fleeing Ireland during the famine, my grandfather never would have been president. If the Schlossbergs, fleeing religious persecution in Russia, had been turned away at Ellis Island, I would not be here today.

Governor Malloy understood the broad significance of this issue. He spoke honestly and intelligently to his constituents and the nation when he explained that America did not have to give up its principles to protect its people. He realized that our security is strengthened when our actions contradict the way America is portrayed by those who would make us their enemy. It is threatened when those same people cause us to abandon our core values.

Governor Malloy took action on a controversial issue at a time when he faced difficult fiscal challenges in his home state. A lesser public servant might have remained silent and avoided a position that has become increasingly unpopular as anti-Muslim sentiment makes its way into the mainstream.

This, of course, is partly why his decision was courageous. It’s not hard to take a stand for something everyone agrees on, and it’s unrealistic to blindly follow principles and still be an effective public servant. A profile in courage must pick an issue and a moment. America is fortunate that the Governor of Connecticut chose as he did.

In a year when so much is at stake for the future of our nation, we must remember the example President Kennedy set for our country and those who, like Governor Malloy, uphold the principles of that legacy today. 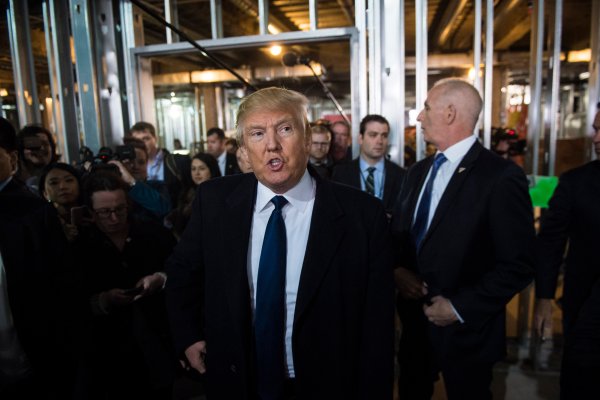 The Beginning of the End of Donald Trump
Next Up: Editor's Pick