The Instagram Accounts Where Every Day Is April Fools' Day

Instagram can be a stressful place to visit. If you’re not confronted with selfies expertly and painstakingly composed to show off the subject’s best angles, you’re looking at someone’s fun vacation. It’s nothing but an endless stream of beauty, elegance, and leisure—all while you’re sitting on your couch.

Fret not. There’s a way to add a bit of subversion to your feed, by following those accounts who treat every day on the service as April Fool’s. Instagram’s stark, unadorned format (as well as, perhaps, the viewer’s torpor) tends to cast the extreme glamour of individual posts into relief. These accounts take advantage of that quality, creating over-the-top and witty parodies of the usual Insta-fare.

Consider @kirbyjenner. The account, which has some 255,000 followers, has a bio that’s a sharp parody of social-media dilletantes’ occupations: “Amateur model / Lover of all things / Fraternal Twin of Kendall Jenner.” Each photo in the feed places “Jenner,” a short-statured fellow with a bushy mustache, in the frame with his supposed twin Jenner, a statuesque and world-famous model. In one snap, he’s dousing Kendall’s oversized burger with ketchup; in another, he’s holding onto her as she rides a large dog in a crop top. He even arranges his own mop into the same “hair-heart” pattern that helped make Kendall one of the most successful Instagram users ever.

The visual effects, here, are quite effectively done; it’s a testament to Kirby Jenner’s skill (whomever he is) that he almost always really appears to be on the same plane as Kendall, no matter what filter she’s used. But the photos also have a welcome deflating effect. Kendall Jenner only looks glamorous posing with a giant hamburger, riding on the back of a dog, or arranging her hair geometrically because she is a literal supermodel—a person whose job is to find her angle and her light. Anyone else trying to mimic her ends up looking like a bit of a goober. Kirby Jenner’s photos are aesthetic achievements, and proof that trying to create such achievements on Instagram is a bit silly.

Christopher Cline does to dog owners what Kirby Jenner does to models: Applies a sense of whimsy to their seriousness. We all follow a couple (or more than a couple) puppy parents who are a little too eager to showcase just how big the pooch is getting: Cline makes the whole thing into a joke by turning familiar vacation scenes into showcases for the Godzilla of dogs. Cline photoshops his goldendoodle Juji into a figure larger than he is himself; a shot of the pair walking down a beautiful street buttressed by snow, standard-issue for Instagram showoffs, becomes a scene from science fiction. And their canoe trip borders on disastrous when Juji’s weight almost sinks the boat (a visual effect that suggests Cline may have a future in the movies). The settings are jealousy-inducing, but Cline’s life with Juji seems like a series of challenges and humiliations, ones fun to watch for any dog lover. It’s funny because—like every photo on Instagram, intentionally humorous or not—it couldn’t possibly be real. 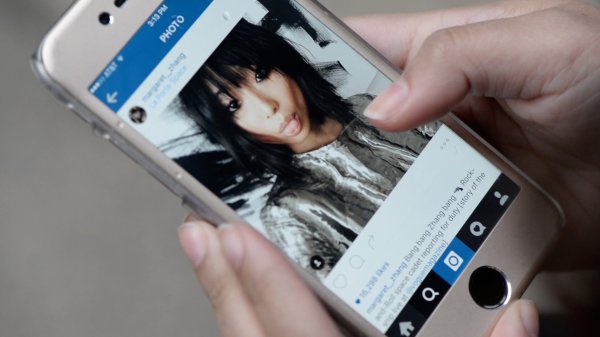 InstaFamous: A Day in the Life of Instagram Celebrity Margaret Zhang
Next Up: Editor's Pick