President of Chile: The Americas Are Stronger Together

Saying that Latin America has changed seems an understatement in 2016. In my university days, the U.S. supported military coups against progressive governments in the region, including in my own country of Chile. Fifteen years later, the U.S. supported the recovery of democracy in those same countries. And just a few years after that, I was attending the Inter-American Defense College, in Washington. Still, few of us imagined the day would come when a U.S. President would set foot on Cuban soil, or that Colombia’ s longest armed conflict on our continent would be close to a peace agreement, assisted by other countries, including Chile. But we can do much more.

We must continue to no longer define our relationship by conflict or ideological differences, but instead by our shared interests of democracy, inclusion and prosperity. Nothing less than the future of the nearly one billion people who call the Americas home is at stake.

While there are still challenges to address, Latin America is also witnessing its most democratic period in history. The solidification of democracy’s roots in the region is possible because the people are demanding more from their governments and have developed an acute awareness that the quality of democracy can only be strengthened through combatting corruption in the public and private sectors, the orderly transfer of power, freedom of expression and respect for human rights and equality.

President Obama acknowledged this new reality in a recent interview, noting that by focusing its attention mostly on the Middle East, the U.S., in his view, has been “missing the boat” on Latin America. I understand Obama’s perspective. Every president knows that they will frequently be called to take action on a number of issues that are beyond the agenda they set when they take office. The recent horrendous terrorist attacks in Europe are examples of violence pulling the world’s attention to take care of what is urgent.

And yet greater collaboration, particularly in the areas of trade and investment, across North, Central and South America can benefit all. Latin America is a land of opportunity, as Obama witnessed recently in Cuba and Argentina. The region’s GDP more than tripled from $1.7 trillion in 1994 to $6.4 trillion in 2014; and consumers are expected to top 640 million by 2020. While the region prospered from the global commodity boom of the 2000s, the recent drop in oil and commodity prices has reinforced prudence in the management of our economies. The challenge ahead is to end our dependence on the commodity cycle, improve productivity, and decrease inequality, for which we must continue to promote innovation and free and fair trade with the United States, Europe, and the Asia-Pacific region, among others.

Democracy demands the continuous improvement of society, not the maintenance of the status quo. In Chile, we have undertaken controversial, but necessary reforms, within a democratic framework that enhance access to quality education, improve labor conditions, strengthen civil rights and reinforce government transparency and accountability.

We must also invigorate and engage our region’s youth. Edmund Burke said that democracy is sustained on a generational pact. Such a pact does not work if each generation does not create the conditions for the next to develop their own contributions. For this reason, my government has continued to push for education reform that will benefit Chilean teachers and students.

While overcoming these challenges will be difficult, my personal experience has taught me that we are not faced with a choice between idealism and hopelessness. The tension between those two states is where democracy exists. A political leader is not bound to fixing the impossible, but he or she is also not bound to accept that status quo is the only possible outcome.

Looking ahead to elections in the U.S. and many countries in Latin America, I am optimistic that we will continue on this path toward greater hemispheric cooperation. We may continue to disagree on specific issues; but the Americas as a whole have much to gain from partnership rather than confrontation or mutual neglect.

For our part, however energetic Chile’s internal debate gets, we will continue to be a trustworthy and active partner in the international system. We are supported by 130 years with no external wars, 80 years in international peacekeeping missions and the most extensive network of trade agreements in the world. We are not anchored by old complaints. We are not slaves of the past. And we do not want the hardships of days gone by to oppress future generations. We have learned from the past to live in the future. 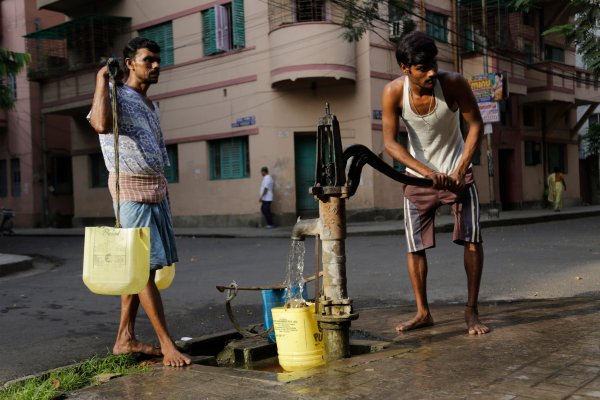 We Are Acting Like Toddlers on Water Use
Next Up: Editor's Pick