John Kasich appealed directly to Donald Trump supporters Thursday, trying to convince them that he could better channel their anger than the bombastic front-runner.

Speaking in New York City, Kasich criticized Trump for such positions as banning Muslims from entering the country and building a wall along the border with Mexico, calling them “wild-eyed suggestions” and saying that Trump is “really not prepared to be President of the United States.”

But then the Ohio Governor pivoted to Trump’s voters, saying he empathizes with the rage he believes is animating their decision to back Trump.

“For those people who have been fervent Trump supporters, their frustration, their expressions, do not fall on deaf ears for me,” he said. “I know that many of those Trump supporters are people who fear for the security of their jobs, believing that politicians don’t care about them as they see the rich get richer and they are increasingly stuck without wage increases. … I understand it, because I lived it. I understand it, because my little town of McKees Rocks was a place where people did not have economic security, where people one day who would play by the rules would wake up and find out there wasn’t anything for them.”

Kasich courted Trump’s disaffected supporters by saying that he would be able to more effectively help them as President.

“I see what’s happening. and I know it’s frustrating. But to the Trump voters, there’s hope,” he said. “While the person that you have favored continues to move in an unmoored, untethered fashion, I understand that at times he’s the vessel for your frustration. And I want to offer myself up as a new vessel, who can actually understand your problems, recognize your problems, and work aggressively to fix them.”

Kasich has fashioned himself in the 2016 race as a happy, optimistic alternative to the perpetually angry Trump or the hardliner conservative Texas Sen. Ted Cruz. But at this point, Kasich has no mathematical path to the nomination before the convention. His team is pinning its hopes on winning over delegates as they become unbound in a contested convention scenario, siphoning them away from Trump if he comes in shy of the 1,237 delegates needed for an outright win.

So his speech today was an assurance to those voters who fear their chosen frontrunner will be snatched from them at a convention. “I am with the Trump people,” Kasich said. ‘They just don’t know me.” 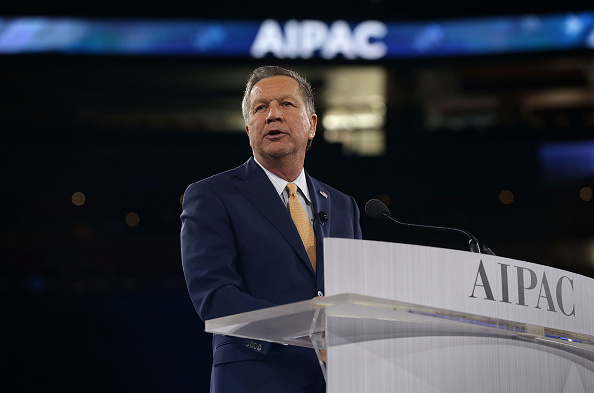 Read John Kasich's Speech to AIPAC
Next Up: Editor's Pick