What Crying In Front of Gloria Steinem Taught Me About Feminism

I was sitting in a meeting a few weeks ago when my co-worker Micaela, who had been silently hunched over her laptop for several minutes, gasped, grabbed my arm and said breathlessly, “I just got us tickets to…”

We work at a large tech company in London with a reputation for a laid back office, so a sudden outburst of contextually inappropriate emotion is as common around our office as barefoot engineers.

Micaela is also my roommate. She’s one of those refreshingly effusive and sincere people that you gravitate towards after you finally escape the affected apathy that seems to define every relationship in college. She’s easily excited, but I could tell this was a big deal. It was.

She had snagged two tickets to an evening with Gloria Steinem and Emma Watson. The possibility of seeing these two feminist icons together was energizing to us and felt important.

Micaela and I have spent countless evenings on our couch talking about what it means to be a woman, watching Ted Talks of Lily Tomlin and Jane Fonda talking about their friendship and what it has meant to them, and lamenting over the lost energy and time that we’ve both spent trying to compete with – rather than celebrate – other women. In a way, it felt that we were meant to have this experience together.

Read more: Most People Are Neither For Nor Against You

I won’t recount the entire conversation Emma and Gloria had. It’s been written about already and was as transformative and powerful as it sounds.(You can watch the complete interview here). More importantly, it gave the women that attended a place to share emotional intimacy with each other.

It was clear from the very beginning, when Gloria and Emma began discussing Gloria’s early childhood as the daughter of an itinerant father. The experience, she said, though difficult at the time, also allowed her to become a feminist organizer on the road. She said the experience equipped her to live with insecurity, and that absence of school spared her a certain amount of brainwashing. She didn’t attempt to dismiss the experience but rather reframed it.

There were many moments that evening when the speakers seemed to pluck anxieties, fears, and half conceived thoughts straight out of my own head and heart, and give them shape and form.

She could have been describing my conversations with Micaela. How many nights had we stayed up past midnight after sharing a bottle of wine (okay, two) talking about our almost crippling insecurities, our distorted self-images and body issues?

I felt proud of Emma as a representative of my generation when she talked about why she started He for She, and when she talked about her sexuality in a candid and unabashed way. Emma’s obvious passion and enthusiasm for feminism was matched by Gloria’s seasoned perspective. When Emma mentioned the negative, man-hating stigma that surrounds the word “feminism,” Gloria said the content and meaning associated with a word is more significant than the word itself.

While Emma was poised and articulate, I sensed that in some ways she was as overwhelmed as Micaela and I, and in a way that was important, too.

After the talk Micaela and I lined up (or queued up, as they’d say here in London—queues, by the way, are more polite than lines) to get our copies of Gloria Steinem’s newly released memoir My Life on the Road, signed by Gloria herself. We both wanted so badly to tell Gloria what her life’s work has meant to us. To thank her for making our lives, our conversations, and our friendship not just a possibility but a reality.

The line was long, and the event coordinators warned everyone that Gloria would have to leave at 9 PM. At just a few minutes past nine, when we were next in line, a woman came over to Gloria’s publicist and said, “cut the line off right here” while making an axe-like motion with her hand right in front of us.

Micaela and I were distraught. Our bad luck elicited the sympathy of a woman from Gloria’s entourage who told us we could come to Foyle’s bookstore on Charing Cross Road, where Gloria would be signing books the next day. Only after this woman walked away did we realize that it was Christiane Amanpour.

Per Christiane’s advice, Micaela and I headed to Foyle’s early. As we waited, I thought about the significance of women like Gloria for my own life.

At 16, my mother gave birth to my oldest brother. Then, as now, teenage pregnancy came with all of its attendant stigma and shame. The experience forced her to build the armor to withstand the social prejudices leveled against her and the fortitude to forgive those who reduced her to a fallen woman, many of whom were her closest family members and friends. My best friend, Brittany, has aptly compared her to a battle-axe.

Much later, my mother left my brother’s father and had me, my sister, and my youngest brother. My brother grew up largely with my grandmother, and while he has been a wonderful older brother, I regret his absence in my life, and I sometimes wonder about the many ways that he feels shortchanged as the child of a teenage mother. But that’s another story.

Regardless of the inherent and lingering complications and difficulties of being a teenage mother and being born to a teenage mother, my mother and brother are success stories. My mother took only two weeks off from high school to have my brother and went on to get a degree in early childhood education and later, a master’s degree. My brother is a business owner with a beautiful family and home.

My mother was and remains aware of how her sex shaped her experience of early parenthood. The language of feminism and self-empowerment was embedded in every discussion I had with her about dating, sexuality, boys, body image, education, and work.

I credit this upbringing with the foundational values that guide and enrich my life. It gave me the freedom to focus on education without worrying about intimidating men. It allowed me to develop deep and meaningful relationships with other women that nourish me as a person. It gave me the courage to come all the way to London for an amazing job opportunity. It is one of the many reasons I fell in love with my husband, a feminist who appreciates and truly likes women.

But in many ways, it was not always easy to grow up with a mother that had such exacting standards.

I think she wanted to make sure that we were tough enough to hold up under the cruelty that the world had showed her so early.

We have sometimes had difficulty understanding each other because I am as sensitive as my mother is tough. As a child I would cry because I was under the mistaken impression that I was being laughed at derisively by my parents, who were simply delighting in the silly and wonderful things children sometimes say.

I would cry because my friends didn’t save a spot for me in line. My sensitivity was so extreme that when my little brother was born and I realized for the first time what it meant to love another person, I would cry over the thought that something bad might happen to him.

In these moments my mother would look at me and ask me two very pointed questions:

After responding to both questions with a timid “no,” my mother would lean in and ask a third question: “THEN WHY ARE YOU CRYING?” Predictably, this prompted more tears. This has become a rather humorous anecdote from my childhood that I’m now able to tell with genuine amusement.

I no longer cry over the same things. I’ve (hopefully) developed enough humility to recognize that not everything is about me. Sometimes people are laughing only because something I say is funny and not because I’m ridiculous. Sometimes friends forget to save a spot in line for you because they are forgetful and not because they don’t care about you. I also know better than to ruminate on macabre possibilities like the death of a loved one.

And I cried when I walked up to Gloria’s table to get my book signed. I tried to explain to her how much of my life has relied on the ideas and language that women like her have fought to bring into both the political and personal arenas of women’s lives, as hot and heavy tears covered my flushed face.

Instinctively, I apologized for crying (another topic she and Emma had covered the evening before). Crying is good, Gloria told me. She said she too felt as if she had lived out opportunities that weren’t available to her mother. She also asked me to give my mom a big hug from her.

I’ve thought a lot about this experience in the last few weeks. While I know it will reverberate in my life for a long time, the simple act of crying with another woman—having those tears valued and validated, having someone I admire listen to my story—has had the most immediate impact on me.

It allowed me to appreciate the strength that is hidden in the sensitivity it takes to let your emotions saturate your experiences, to let a moment mean something to you. Because if it hadn’t been emotional when I met Gloria, it wouldn’t have been as memorable, as significant.

My mom had to be tough; I think women of her generation that wanted anything more than received experiences had to be, and my mother certainly had to fight not to be defined as just a teenage mother. I am not tough in the same way, but I believe that toughness is not the same as strength, and my experience has taught me that the two are not mutually inclusive or exclusive.

Furthermore, I’ve learned that the latter is of infinitely more value than the former. I’ve known people whose toughness protects an interior world that is easily thrown off balance and I’ve known sensitive ones with enormous strength of character and conviction. In some ways toughness can actually inhibit us from having genuine experiences.

As the title suggests, Gloria’s book is about her life on the road. In it, she encourages the reader to adopt the attitude of being on a journey, of the excitement of discovery. Reflecting on my encounter with her while reading her memoir has made me realize that the difference between my mother’s toughness and my own sensitivity is a generational journey that reflects our individual and shared strengths.

My mother didn’t have the luxury to cry, but I’m grateful that I do.

This article originally appeared on ReadMilk.co. Sign up for the Milk Newsletter here and receive a new female perspective in your inbox each week. 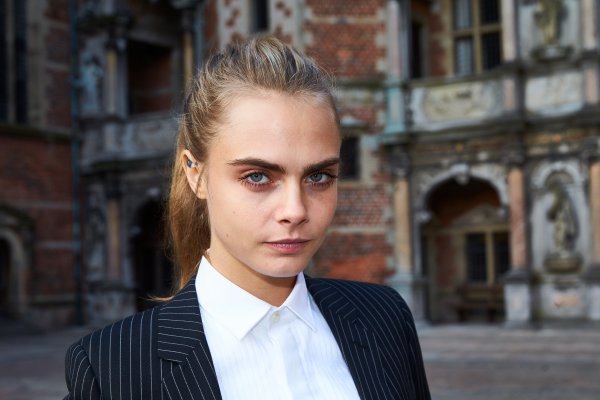 Cara Delevingne Says She Suffers From Depression in Series of Emotional Tweets
Next Up: Editor's Pick