Steven Soderbergh’s 2009 film The Girlfriend Experience hasn’t aged particularly well. Its chilly cynicism about the connections between prostitution and the scrappiness needed to survive in a failing economy was frustratingly unsubtle. Released a few months into President Obama’s first term, the movie is a reflection of its time, but one that’s drudgery to revisit.

Which makes it a strange choice to reboot now. (Who remembers the film, or cares?) But it’s also a perfect one. Starz’s Soderbergh-produced series The Girlfriend Experience, whose 13 episodes will be released to subscribers on April 10, may in seven years look as dated as its precursor, but that’s a worry for another day. This is a show for our moment.

Our protagonist is Christine Reade (Riley Keough), a second-year law student in Chicago who grows increasingly consumed with her other occupation—one that’s perfect for someone more comfortable with ambition than propriety. She’s a “girlfriend experience” call girl. That means her purview expands beyond sex. She’ll join clients for dinner, a drink or a tropical vacation. Over repeated meetings she builds with them a shared history of intimacy, or a simulacrum close enough to be satisfying.

Christine, who goes by Chelsea when she’s working, takes easily to the particular demands of her job. She’s often shown being buffed, polished and waxed by various aestheticians as she sits, reactionless. She’s unmoved by the trappings of money (which, in keeping with our awareness of how the wealth gap has grown since 2009, are rendered here as either garish or grimly exhausting). Her mind races with ways to build her business, get ahead at her prestigious legal internship and evade the pitfalls that keep opening up. She must first ensure that her proffered girlfriend experiences don’t come to be perceived as girlfriend realities. Later, a half-million-dollar inheritance from a late client lies tantalizingly out of reach, for to accept it would be to reveal herself as a sex worker and open herself up to humiliation. Worse, a recording of one of her illicit sessions is sent from Christine’s email account and lands in the inboxes of her real-life contacts, at least one of whom we see watching and watching—and watching.

It’s in this plot development, which comes to govern the season’s plot developments, that The Girlfriend Experience finds its newsy energy. The practice of online “doxing”—revealing personal information, often gleaned by hacking, about individuals—has become a legitimate threat that’s difficult to curb. That the victim in this case happens to be a sex worker who appears to have sent the email makes her difficult to defend. Frozen out at her internship, Christine goes from canny operator to avenging angel, losing her balance as she uses the tools of surveillance to try to get revenge on the men who she believes wronged her.

It’s a crusade Keough is well suited to undertake. Last year she appeared as one of the enslaved brides in Mad Max: Fury Road, and she brings to this role a similar affect–rage cloaked in placidity. Watching her give herself over to paranoia (installing a home camera system, for instance) is riveting stuff.

Her paranoia is understandable. More than any other recent show that’s dealt with web culture—looking at you, House of Cards—The Girlfriend Experience intuitively grasps the manner in which constantly available information can transform lives. If it resembles any movie genre, it’s the paranoid eavesdropping thrillers of the 1970s, like Klute and The Conversation. In an era as unsettled as our own, they underscored just how creepily compelling surveillance can be.

Christine does a funny thing with her home recordings. We see her playing back a day’s footage to see if there were any intruders, but she finds none. Yet she’s gripped by her own movements through the day—she can’t stop watching herself. By season’s end, she’s set up an entirely different kind of in-home camera, one for paying clients to gaze upon her. If she’s going to be surveilled, she may as well get a cut. “Don’t talk,” she says. “Just watch me.” 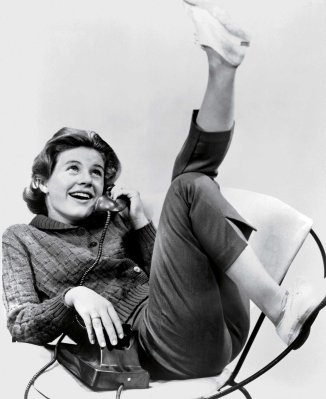 The Charm and Power of Patty Duke
Next Up: Editor's Pick