The Charm and Power of Patty Duke

In the early 1960s, the idea of one actress’ playing “identical cousins”–as Patty Duke did in The Patty Duke Show, which ran from 1963 to 1966–was a novelty any way you looked at it. Patty, the supremely American teenager who, as the show’s theme song told us, has “only seen the sights a girl can see from Brooklyn Heights,” was the spice to the sugar of her more refined Scottish cousin Cathy. Cathy would tackle her homework with soldier-like efficiency; Patty would pout before slogging through it. These were highly stylized and occasionally ridiculous characters, largely images of what we wanted to believe teenage life was like. But even between the spaces on the laugh track, Duke managed to capture some of the dualized anxiety of being a real-life teenager. She was two girls in one, and you couldn’t help liking both–even if Patty, the kid who preferred the hippy-hippy-shake of rock ‘n’ roll to the hauteur of the Ballets Russes, was the one you really warmed to.

As it turned out, Patty, whose real name was Anna Marie Duke and who died at age 69 on March 29, was suffering from bipolar disorder in the years she was working on the show, though the illness wouldn’t be diagnosed for nearly 20 years. She was also, as she revealed in her 1987 memoir, Call Me Anna, the victim of ruthless managers who controlled her with drugs and bilked her out of earnings she’d worked hard for. Before we began using the word survivor as a catchall noun for anyone who’d conquered a hangnail, Duke really was one. She built a steady career in film (she played Neely, the good kid gone wrong, in the 1967 Valley of the Dolls) and won three Emmys for her work in television. She was also, from 1985 to 1988, the president of the Screen Actors Guild.

But Duke was most famous, and rightly so, for her role as Helen Keller in Arthur Penn’s 1962 film, The Miracle Worker, one of the greatest performances ever given by a child actor. Duke, 15 at the time, had played the role on Broadway, opposite Anne Bancroft as Annie Sullivan, who also reprised that role in the film. Both won Academy Awards, and both are astonishing, but Duke is the one more likely to haunt your sleep. In the early scenes, Helen is closed off from the world, and Duke turns that isolation into a kind of intimate savagery. When she lashes out at those around her–sending vases crashing from shelves or sweeping dishes off the table with her windmilling arms–she’s a figure of feral fury. Her family doesn’t know what to do with her, and we don’t either. The power of the performance lies in the way Duke plays on our discomfort, and on our pity. We can feel Helen’s scorn for us, a by-product of her intelligence and frustrated rage–and we get this sense from an actress who hasn’t uttered a single line. It’s all there in Duke’s unnervingly closed-off eyes and in the way her hands, before they find their freedom in language, grab at the air, reaching toward everything and nothing. Duke’s mastery of the actor’s alphabet, of all the physical tools that go along with the verbal and cerebral ones, was remarkable. And she was only a kid. 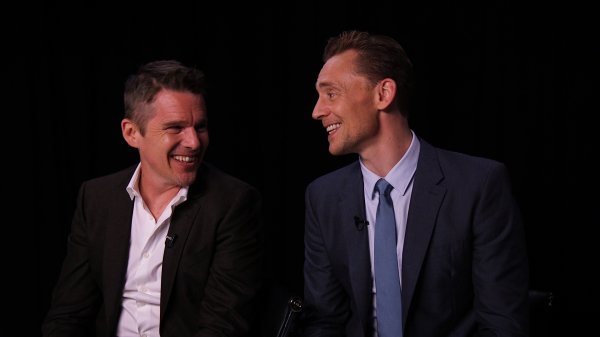 Ethan Hawke and Tom Hiddleston Nailed This Impromptu Duet
Next Up: Editor's Pick