The Pentagon Wants Autonomous Fighter Jets to Fly in Combat

Joint Strike Fighter F-35 Lightning II on the deck of USS Wasp on Aug. 28, 2013 at sea off the coast of Virginia
Simon Bruty—Getty Images
By Clay Dillow / Fortune

The U.S. Air Force Research Lab is moving ahead with an initiative to turn aging F-16 fighter jets into unmanned, autonomous combat aircraft. The pilotless planes will fly alongside the newer aircraft like the F-35 Joint Strike Fighter.

Speaking at a forum in Washington, Wednesday, U.S. Deputy Secretary of Defense Robert Work said he expects to see the autonomous aircraft plying the skies alongside manned jets before driverless vehicles enter service on the ground. Work spoke specifically about U.S. Air Force efforts to create autonomous wingmen for its fighter pilots that gave new life to older planes imbued with autonomous piloting technologies and teamed with next-generation aircraft.

“You take an F-16 and make it totally unmanned,” Work said. “The F-16 is a fourth-generation fighter, and pair it with an F-35, a fifth-generation battle network node, and have those two operating together.” “Fourth-generation fighter” generally refers to fighters in service from the 1980s to the present day (including the F-15s, F-16s, and F/A-18s that make up the bulk of the U.S. military fighter fleet), while “fifth-generation” refers to the latest generation of stealth fighters like the F-22 and F-35, which are built by Lockheed Martin.

The concept of teaming unmanned combat jets with piloted fighter aircraft has circulated within the Pentagon for years. It’s even got a name: “Loyal Wingman.” The Air Force has experimented with the idea for some time, and the high-profile mention from the Department of Defense’s second-in-command signals that the rest of the Pentagon is taking the idea seriously as well.

As it happens, the Air Force already owns a fleet of unmanned F-16s. In 2013, Boeing outfitted a number of retired F-16s (which are built by Lockheed Martin) into pilotless target drones. Such remotely piloted aerial drones themselves are nothing new; prior to the F-16s, the Air Force used retired Vietnam-era F-4 Phantoms for live target practice.

But remotely controlled aircraft and autonomous piloting are two vastly different things. The Air Force isn’t just looking for an unmanned aircraft that can be piloted from afar, but a robotic aircraft that can pilot itself, taking cues from a human pilot in another aircraft. “The onboard autonomy must be sufficient for the Loyal Wingman to complete all basic flight operations untethered from a ground station and without full-time direction from the manned lead,” the Air Force Research Lab (AFRL) explained in a request for industry input published earlier this month.

As indicated by that request, the AFRL is in the process of taking things a step further, developing autonomy algorithms that would imbue F-16s or other older aircraft with the “brains” to serve as autonomous wingmen to future fighter pilots. A formal program is in the works for 2018, FlightGlobal reports, with flight demonstrations planned through 2022.

Those autonomous wingmen would serve as a way to stretch U.S. military capabilities via better technology, rather than through increased manpower—a long-term Pentagon strategy known as the “third offset.” Rest assured, Work told the audience, that “we will not delegate lethal authority.” That is, humans—not machines—will always make the critical decision to release weapons.

But the spread of autonomous technologies and platforms across the battlefield is an inevitability, Work told the audience. “This is something that is inexorable,” he said. “It is going to happen.” 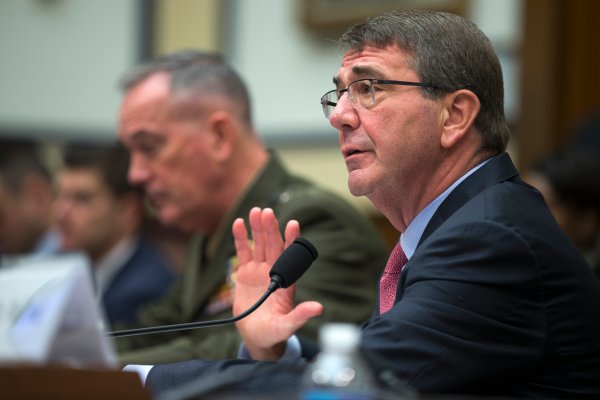