Why So Many States Are Fighting Over LGBT Rights in 2016

The Supreme Court’s same-sex marriage ruling was supposed to settle the fight over LGBT rights, right? Not a chance. In 2016, states across the nation have been divided by a raft of new legislation—more than 200 bills advocates consider anti-LGBT have been introduced so far this year, according a tally by the Human Rights Campaign. These measures take many forms and have many aims, but they are often rooted in social conservatives’ reaction to two things. Here’s a primer:

Support for marriage equality is at a record-high 60%, but plenty of Americans remain strongly opposed, according to organizations like Gallup. The court’s ruling has energized this large, if declining, group, and has led state lawmakers to propose versions of religious freedom bills in response.

Not all religious freedom bills are controversial. Many states and the federal government passed their own in a different era. (More on that here.) Today, these measures become lightning rods when they contain language that has the potential to provide legal cover for individuals or organizations to treat LGBT residents differently because of a religious or moral belief. Maybe the bill is something a baker could cite when refusing to make a cake for a same-sex wedding. Or perhaps it would allow an adoption agency or foster program to refuse to help a gay couple find a child to rear.

In Georgia, where the governor vetoed a high-profile religious freedom bill on March 28, one lawmaker sponsoring it explained that “when the Supreme Court changed the definition of marriage, dynamics changed. There was a need for a law — for this law.” Some state lawmakers in Indiana, where the governor signed and then amended a much-maligned religious freedom law last year, made similar statements.

An important backdrop is that while there is a federal law that protects people from being discriminated against based on qualities like race or religion, there is no statute that explicitly forbids firing someone because they are gay or evicting someone because they are transgender, for example. Advocates have been trying to pass one since the mid-90s and have never gotten through Congress. Most states don’t have non-discrimination laws that explicitly cover sexual orientation and gender identity either, though many cities do.

Some courts have found implicit protections for gay or transgender people in prohibitions on sex discrimination. Other courts have ruled otherwise. Several cases turning on this point are pending, like this ACLU lawsuit in Virginia. Many people mistakenly believe these protections already exist. And there is broad support for such protections, even among a good chunk of people who are against same-sex marriage.

The second factor driving many of the state bills in the news is the growing visibility of transgender people. Long marginalized even in the LGBT rights movement, transgender people are increasingly prominent in American culture and are fighting for stronger protection under the law. And many federal interpretations of existing laws are coming down in their favor.

This emergence has been met with vitriol among some lawmakers–one described it as a “virus that has broken out.” Such language is reminiscent of the 1970s, when the increasing openness of gay and lesbian people prompted some fundamentalists to argue that they were out to “recruit” children. Until the mid-70s, many in the medical community still classified their sexual orientation as an illness. “Trans people were never this visible before,” says Equality Federation executive director Rebecca Isaacs. “It’s been both a really positive thing and its really also brought out the opposition with all of its fangs.”

The “virus” comment was made by a Republican lawmaker earlier this year in South Dakota, where the legislature passed a bill that would have required public school students to use bathrooms based on their “chromosomes and anatomy” at birth. Essentially, the bill would have served to ban transgender girls from girls’ bathrooms and locker rooms and likewise for transgender boys, had the governor not vetoed it. Actually implementing such a law would come with a host of complications and privacy issues.

What Does This Have to do With Bathrooms?

Arguments about which bathroom transgender people should be using are often at the heart of today’s debates over public accommodations, a cumbersome legal phrase that basically refers to the way people are treated in the public square. When gender identity is protected in that sphere, that gives transgender people legal support for using the bathroom that aligns with their innate sense of who they are.

The North Carolina law that started causing such outcry in late March was largely driven by this issue. Charlotte, the state’s largest city, had passed non-discrimination protections for LGBT people in February. It was controversial and the bathroom question was at the center of it. The new law invalidated those protections (and similar ones in about a dozen other cities) by essentially saying that the state would be in charge of non-discrimination matters and barring cities from adding protected classes that the state doesn’t recognize. But the first thing one reads in the new law is language that explicitly requires people like students to use bathrooms that match their “biological sex,” defined as the sex listed on their birth certificate.

The Department of Justice and U.S. Equal Opportunity Employment Commission have issued multiple rulings that say barring transgender people from using the bathroom that aligns with their gender identity is a form of sex discrimination. The Department of Education has issued similar guidance, saying students’ gender identity must be respected. State lawmakers pushing bills that aim to keep transgender people out of certain bathrooms often see themselves as pushing back against government overreach and a “commingling of girls and boys” that they believe is wrong. In South Dakota, state senator Brock Greenfield urged his colleagues to support the bill by looking at “what has happened in Washington, D.C., relative to this issue and the promotion thereof.” Until, “extraordinarily recently,” he said, “this issue was not an issue.”

In North Carolina, LGBT rights activists are asking not only that the law be repealed but that the state go further in the other direction, adding explicit protections covering sexual orientation and gender identity in non-discrimination laws.

What happens in that state will flesh out this story further: just days after Gov. Pat McCrory signed the bill, the ACLU filed a lawsuit on behalf of transgender and lesbian residents, alleging that the new law is a form of sex discrimination, as well a a violation of constitutional protections like the Fourteenth Amendment’s due process clause. The state attorney general—a Democrat who is running against McCrory for governor—called the law “a national embarrassment” and refused to defend any named parties challenged in the lawsuit. McCrory, meanwhile, has since said he’s “open to new ideas and solutions.”

But don’t expect that to bring an end to these fights. On March 30, the Mississippi senate passed the “Protecting Freedom of Conscience From Government Discrimination Act.” Among its stipulations: gender is determined at birth, and the belief that reserving “sexual relations” to marriages between men and women should be protected. 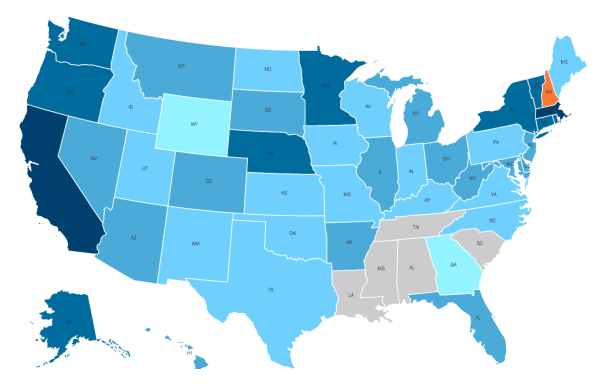 See the Minimum Wage in All 50 States
Next Up: Editor's Pick