As the world’s leaders gather Thursday in Washington for a two-day Nuclear Security Summit dedicated to keep such weapons in check, Republican presidential candidate Donald Trump is once again shaking things up: he argues that U.S. allies should build their own nuclear weapons so they no longer have to rely on an impoverished America’s atomic umbrella.

It’s amazing his defense of campaign manager Cory Lewandowski, charged with grabbing a reporter Mar. 8, is getting more attention than his suggestion that it may be time for Japan and South Korea to outfit themselves with nuclear arms to counter the threat posed by North Korea.

“Every President since Harry Truman has tried to stop other nations from going nuclear,” says Joseph Cirincione, president of the Ploughshares Fund, a non-profit group dedicated to reducing the threat posed by nuclear weapons. “John F. Kennedy started the effort to get the Non-Proliferation Treaty because Japan and Germany—countries we had just defeated in war—were researching nuclear weapon programs. We stopped them, and South Korea and dozens of other nations. And now Trump wants give them the bomb? This is insane.”

Trump actually backed into this mess. “Biggest problem, to me, in the world, is nuclear, and proliferation,” he told the New York Times last Friday. But he made clear on Tuesday that letting Japan and South Korea develop their own nuclear deterrent may be the best way to handle North Korea. “At some point we have to say, you know what, we’re better off if Japan protects itself against this maniac in North Korea, we’re better off, frankly, if South Korea is going to start to protect itself,” he told CNN. “Wouldn’t you rather, in a certain sense, have Japan have nuclear weapons when North Korea has nuclear weapons?”

Trump doubled down Wednesday, when he refused to say he wouldn’t use a nuclear weapon somewhere in Europe or the Middle East. “I’m not going to take it off the table,” he told MSNBC’s Chris Matthews. To do so, he suggested, would weaken U.S. deterrence. “Why are we making them?” he asked of the nation’s thousands of atomic weapons. Then he made a rhetorical U-turn: “I’m not going to use nuclear, but I’m not taking any cards off the table.”

Trump’s approach to nuclear matters seems to be a work in progress. He appeared ignorant about the bomber, submarine and ICBM legs of the U.S. nuclear triad in a December debate. Tuesday, he cited his purchase of “thousands” of South Korean televisions—“because I am in the real estate business, you know, in my other life”—to suggest South Korea is smart and rich enough to build its own nuclear arsenal. And he mentioned an uncle, John G. Trump, who was a professor at MIT, to lend credence to his nuclear insights.

Like many of Trump’s proposals, there’s a certain initial logic to his push to free the nuclear genie in east Asia. He cites the $19 trillion U.S. debt as the key reason for surrendering the U.S. nuclear shield over east Asia. “We can’t afford it anymore,” he told CNN Tuesday. “It’s very simple.”

But the entire U.S. nuclear arsenal accounts for only about 10% of the Pentagon’s annual $600 billion budget—and nearly all of that nuclear spending would have to continue to deter China and Russia. The added cost to tuck Japan and South Korea under the U.S. nuclear umbrella is minimal. The far bigger costs are the conventional, non-nuclear forces the U.S. has in both countries. There are about 53,000 military personnel (39,000 onshore and 14,000 afloat in nearby waters), 43,000 dependents, and 5,000 Pentagon civilian employees in Japan (the $1.6 billion that Tokyo pays Washington annually for their presence foots only a portion of their cost). Seoul pays about half as much to support the nearly 30,000 U.S. troops based on South Korean soil.

But the ultimate downside to Trump’s stance is so great that his arguments collapse. The first is that the U.S. benefits greatly in terms of trade from a stable east Asia, something a regional nuclear-arms race could throw into a tailspin. The U.S. has been the key guarantor of stability in the region since World War II. The economic benefits Americans get from such trade eclipses by far the cost of U.S. military support in the neighborhood.

Secondly, since 1970 most of the world has abided by the Nuclear Non-Proliferation Treaty, which recognizes only five nuclear states: China, France, Russia, the United Kingdom, and the U.S. Four other nations—India, Israel, North Korea and Pakistan—have nuclear weapons. “There are indications because of new inventions, that 10, 15, or 20 nations will have a nuclear capacity, including Red China, by the end of the presidential office in 1964,” Democratic presidential candidate Kennedy warned shortly before his 1960 election. “This is extremely serious.” The NPT has kept a lid on nuclear proliferation. If Trump’s proposal were to prevail, Taiwan probably would go nuclear, and Saudi Arabia would likely follow.

Finally, the greater the number of nations with nuclear weapons—and all their attendant security concerns—the larger the chance that terrorists will get their hands on such weapons. And such bad actors don’t have to acquire an intact nuclear bomb. They could build a so-called “dirty bomb” around the fissile material that atomic arms require, and spew radiation across a city.

Some terrorists, al Qaeda among them, have made clear they want nuclear weapons, even if only of the scaled-down “dirty bomb” variety. Belgian authorities have found evidence that the ISIS network that killed 32 last week in Brussels had been keeping an eye on a senior official at a local nuclear-power plant. A pair of employees at another Belgian atomic facility traveled to Syria in 2012. One died there, but the other returned home to Belgium and was freed from prison last year.

“If the Islamic State does turn to seeking nuclear weapons, it has more money, controls more territory and people, and enjoys a greater ability to recruit experts globally than al Qaeda at its strongest ever had,” says a new report from Harvard’s Project on Managing the Atom. “The United States and other interested countries should take a broader approach to consolidating nuclear material at fewer locations…” 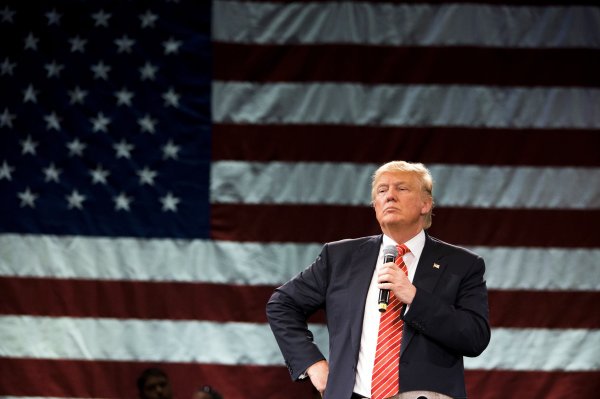 The Ladies and the Trump
Next Up: Editor's Pick