“I know the outer world exists, and I’ll be very cognizant of that, but at the same time, our country is disintegrating,” says Donald Trump, who wants to “make America great again” by refocusing U.S. foreign policy to rebuild American strength from within. This idea comes not from a civil libertarian’s respect for the constitution, but from his trademark exhibitionist belligerence. He’s less Thomas Jefferson than George Jefferson, moving on up to win his party’s presidential nomination.

Trump is no actual isolationist. He says he wants to build U.S. military might. He has floated the use of American ground troops in Syria, pledged to torture suspected terrorists, argued for increased use of drones and for “knocking the hell out of ISIS”—maybe even with nuclear weapons. Trump doesn’t oppose trade. He wants to shred the “stupid” agreements of the past and bring his state-of-the-art negotiating skills to secure much better deals, all to restore America’s lost prosperity and U.S. manufacturing jobs.

He sees most U.S. allies as weak at best and free-riders at worst. He denounces alliances and institutions that he says constrain U.S. action and cost the taxpayer too much money. He doesn’t want to scrap the NATO military alliance—he just thinks France, Germany and others should pay more of its bills. Trump’s go-it-alone approach is in some ways simply an extension of Bush era neoconservatism and the Obama administration’s extensive use of drones and financial sanctions.

That said, Trump has raised important questions that speak directly to the anxieties of many Americans, and the Washington foreign policy establishment would do well to engage him. Allies are more at risk than we are. Europe is far more vulnerable than the U.S. to Middle East turmoil and Russian aggression. Japan and South Korea are much more at risk than the U.S. to Chinese encroachment and threats from North Korea. ISIS is a much larger threat to Saudi Arabia than the U.S., and Americans don’t need Saudi oil nearly as much as they used to.

Nor are conservatives the only ones raising these questions. Supporters of Bernie Sanders don’t expect their champion to offer a well-articulated foreign policy, because they accept his view that the future of Asia and the balance of power in the Middle East are far less important than questions of economic fairness at home. They insist that trade is bad for America, and even Hillary Clinton—who championed the Trans-Pacific Partnership deal as Secretary of State—now pays tribute to this view.

Read More: Donald Trump Explains Why His Foreign Policy Is So Vague

Why does Washington allow Germany and Japan, two of the world’s wealthiest nations, to outsource their security to the United States? Do ordinary Americans really benefit from globalization? Doesn’t the US trade deficit prove that others take us for suckers? Trump assumes these questions don’t have good answers. It’s the responsibility of our leaders (and would-be leaders) not simply to roll their eyes and tell us Trump is wrong. Americans deserve to know why he’s wrong. In detail.

I’ve written in recent weeks that Trump has embraced an “America first” foreign policy. I didn’t mean that as a compliment, and I’m surprised to see him grab that label with both hands. But “America first” won’t make America great again, because the country’s exceptionalism is based not simply on its military strength and wealth. For all its faults and shortcomings, the U.S. remains a nation—and an idea—worth emulating. It provided a winning alternative to fascism and communism when the world needed one and has created many of the institutions and innovations that have helped lift hundreds of millions out of poverty. It has set a standard of individual freedom and opportunity against which people everywhere measure their own governments. The American idea of citizenship is based on allegiance rather than tribe, drawing people to its shores from around the world.

These are the choices and values that make America great. Donald Trump lives in a zero-sum world in which China’s leaders “have drained so much money out of our country that they’ve rebuilt China.” He divides the world into winners and losers, good and evil, workers and freeloaders, us and them. That’s hardly an exceptional idea for an exceptional country.

What if the America that others emulate is the small-minded, self-interested version? What would that mean for the future of Europe’s union, law and order in Asia, efforts to contain wildfires in the Middle East or to coordinate foreign and trade policy in Africa and Latin America? Will it help the world harmonize its efforts to fight terrorism? Can Americans remain safe in an increasingly volatile world?

It’s not enough to dismiss or denounce Trump and his foreign policy views, even if he never becomes President. The questions he raises, and the resentments they engender, must be answered, clearly and confidently, or they will linger. That’s a risk that America and the world can’t afford. 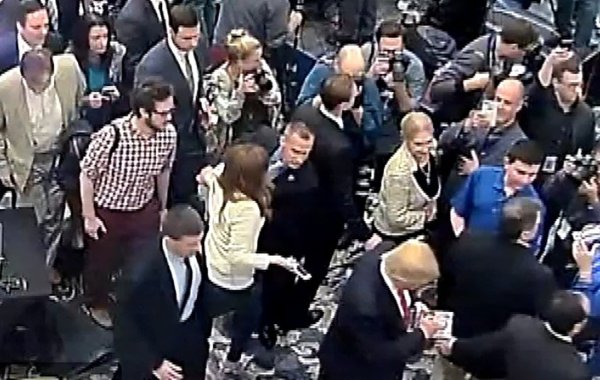