An EgyptAir flight bound from Alexandria to Cairo was hijacked and diverted to Cyprus on Tuesday, where the passengers and crew were released and one suspected hijacker arrested following a standoff that unfolded over nearly seven hours on the tarmac at Larnaca’s international airport.

Although no one was harmed in the incident, the hijacking underscores concerns about aviation security in Egypt, coming several months after the downing of a Russian airliner over the Sinai Peninsula that killed 224 people.

EgyptAir Flight 181, with 56 passengers and seven crew members on board, was hijacked after taking off from Alexandria on Tuesday morning, airline and government officials confirmed.

As of Tuesday afternoon, authorities in Egypt and Cyprus were still trying to confirm what motivated the hijacker. Cyprus President Nicos Anastasiades said the hijacking was not related to terrorism, according to the Associated Press, but Egyptian officials did not immediately rule it out. Egypt’s minister of civil aviation, Sherif Fathy, said there had been no clear demands from the hijacker. It was unclear whether the hijacker was wearing a belt rigged with explosives, as EgyptAir initially said.

“We had to deal with the situation as a security threat and operate as if he had a real bomb in order to keep all people on board safe,” Fathy told state television following the end of the standoff, in remarks reported by Egypt’s Al Ahram newspaper.

“We don’t know whether the equipment is true or real or not,” Fathy said during a news conference in Cairo before the hijacker was arrested. “We cannot take any risks except dealing with it as a serious situation.”

The Airbus A320 took off from Alexandria’s Borg El Arab Airport at 6:36 a.m. local time. The jet soon strayed from its flight path, veering north toward Cyprus, and landed in Larnaca at 8:07 a.m., according to the flight-tracking site Flightaware.com. The plane was in the air for just 31 minutes.

After landing in Larnaca, the hijacker engaged in a standoff with security forces on the ground at the airport, which remained closed on Tuesday afternoon. By 10:46 a.m. local time, the hijacker had released the majority of the passengers, with only the flight crew and four foreign nationals still on board, according to EgyptAir.

The tension continued until mid-afternoon, when the remaining passengers and crew left the plane, including one who climbed threw a cockpit window and jumped to the ground. The hijacker was arrested around the same time, Cypriot officials said.

“Its over,” Cyprus’ Ministry of Foreign Affairs said in a tweet announcing the hijacker’s arrest.

In the immediate aftermath, the hijacker’s motives remained unclear. State media in Cyprus reported that the hijacker might be motivated by a personal conflict and had asked to contact his ex-wife. However, a separate report attributed to Cyprus’ state media said the hijacker had issued a political demand for the release of prisoners in Egypt. The reports could not be immediately confirmed.

“It’s not something that has to do with terrorism,” said Cyprus President Nicos Anastasiades. Speaking at a news conference in Cyprus, he chuckled as he responded to a reporter’s question about the incident. “Always there is a woman involved,” he said.

The hijacking is the second major aviation security breach in Egypt in the past several months. In October, a Russian airliner was brought down over the Sinai Peninsula, killing 224 people, mainly foreign tourists. Militants affiliated with ISIS said they downed the jet using an improvised bomb inside a beverage can smuggled on to the plane. The downing of the Russian jet prompted a national review of Egypt’s airport security conducted by the London-based consultancy Control Risks.

The attack on the airliner bound from Sharm el-Sheikh to St. Petersburg was one of the deadliest attacks claimed by the Sinai-based franchise of the militant group ISIS. Egypt’s security forces have battled insurgents in Sinai for years, with the militants accelerating their following the military’s removal of Islamist president Mohamed Morsi in July 2013.

The bombing of the Russian jet also dealt a devastating blow to Egypt’s tourism industry which struggling to recover from years of political unrest following the 2011 popular uprising that ousted autocratic president Hosni Mubarak. The country’s tourism receipts fell 15 percent in 2015 compared to the previous year, according to the tourism ministry. 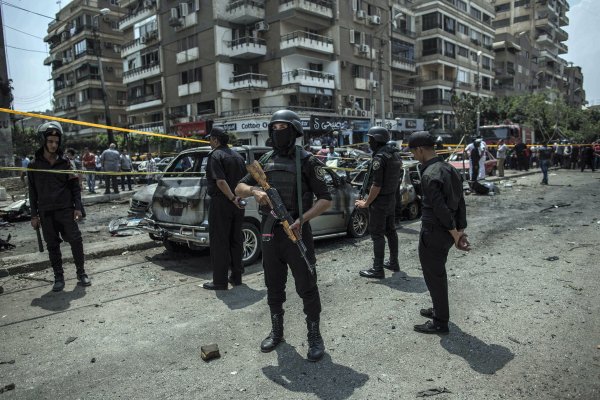 How Egypt's Security Services Lost Credibility
Next Up: Editor's Pick