The Problem With Maryland's State Song

Governor Larry Hogan gives the State of the State address to a joint session of the general assembly at the State House in Annapolis, Maryland on February 3, 2016.
Marvin Joseph—The Washington Post / Getty Images
By Christian McWhirter / History News Network

I occasionally give talks on Civil War music, and when I do, there’s a line that almost always gets a laugh: I read audiences the lyrics of “Maryland, My Maryland,” wait a beat, and then say, “amazingly, that’s still Maryland’s state song.”

It looks like I might not be able to tell that “joke” much longer because just a few weeks ago the Maryland Senate voted to alter the words to the song that’s represented the state since 1939. Yes, after decades of failed attempts, we finally have a compromise that might work—replacing the original 1861 lyrics by James Ryder Randall with a milquetoast but inoffensive 1894 rewrite. It’s a big step and part of the broader movement to remove, replace, or re-contextualize public displays of pro-Confederate (or Lost Cause) memory across the nation. Up to this point, these efforts have paid more attention to monuments and building names, but “Maryland, My Maryland” certainly deserves such scrutiny. A quick look at its history and content shows it’s not just pro-Confederate, it’s dissident.

The song’s origins have been widely reported elsewhere, so I’ll just summarize here by saying Randall wrote it (originally as a poem) in response to an April 19, 1861, riot in Baltimore that erupted as Union soldiers passed through the city on their way to Washington. 4 soldiers were killed as were 12 civilians, plus multiple wounded. The poem spread quickly across the South and eventually a Maryland secessionist named Jenny Cary set it to the tune of “Lauriger Horatius” (better known today as “O Tannenbaum”). The song became a huge hit—for a time topping even “Dixie” as the Confederacy’s most popular patriotic anthem. When Robert E. Lee’s army invaded Maryland in September 1862, they sang the tune as they crossed the Potomac—anticipating hordes of new recruits and hopefully the state’s long-awaited secession. When they returned to Virginia on September 20, after being defeated at Antietam, they sang new lyrics mocking Marylanders for their perceived cowardice. The song nevertheless remained a favorite but never again reclaimed its anthemic status.

After the war, Marylanders and other Lost Cause advocates revived “Maryland, My Maryland” as a symbol of their current and past struggle against “northern oppression” and it eventually became an emblem of Maryland’s postwar Confederate identity. It was in this context that the old tune made its way into the canon and, in 1939, became the state song.

In this, it paralleled a few other pre-1865 songs that glorified the “Old South” and implicitly ameliorated the evils of slavery. For instance, “My Old Kentucky Home” (Kentucky’s state song) and “Old Folks at Home (Swanee River)” (Florida’s) are both minstrel songs written by Stephen Foster. Minstrelsy was a wildly popular genre of music in the 19th and 20th centuries, built upon blackface stage portrayals of African Americans emphasizing their supposed mental inferiority. Both of these songs are potentially offensive when placed in this context, but neither’s lyrics are overtly racist. Thus, they can be defended as state songs if their advocates argue they’ve transcended their original minstrel context.

“Maryland, My Maryland” has no such luxury. Listeners do not need to know American musical or racial history to understand it has no business being a state song. The lyrics are overtly pro-Confederate, and thereby pro-slavery and pro-secession. These aspects are odd enough from a state that never joined the Confederacy but they’re certainly anathema to modern listeners.

In the coverage given to the recent Maryland bill, commentary has mostly focused on the song’s most obvious pro-Confederate lyrics, such as in the first verse:

The despot’s heel is on thy shore,

The “despot” is Abraham Lincoln, but the phrase “patriotic gore” is potentially even more problematic. In this, the song is praising the pro-Confederate Baltimore rioters who killed American soldiers and tried to take the state out of the nation. This is not patriotism to the United States but to the failed Confederacy.

The lyrics also apply a feminine aspect to the state, as Randall asks her to “gird thy beauteous limbs with steel” and “Dear Mother! burst the tyrant’s chain” (again, the “tyrant” being Lincoln). He also depicts Maryland’s continued loyalty to the Union in adulterous terms: “Come! for thy dalliance does thee wrong.” The song goes on to equate northerners with “the Vandal” and pleads:

This is extreme language—comparing loyalty to the Union with a Roman-style execution of the state’s very soul. There’s anxiety all through these words; fear that Maryland won’t respond to Randall’s call and join her “sisters on the plain.” The final verse relieves this tension and reassures us that Maryland will inevitably find her place in the Confederacy:

It seems patently absurd that a modern state would have such an expressly dissident official song. Indeed, that’s precisely why audiences laugh when I tell them about it. Unlike current dialogues about Confederate monuments, there’s really no room for debate here. We might hesitate to move or destroy marble monuments for fear of permanently losing them, but if Maryland leaves “Maryland, My Maryland” behind, the song will still exist—it will just go back to the historical record where it belongs. Let’s hope the Maryland House of Representatives and Governor Larry Hogan think so too.

Christian McWhirter is an Assistant Editor for The Papers of Abraham Lincoln and Editor of the Journal of the Abraham Lincoln Association. He is the author of Battle Hymns: The Power and Popularity of Music in the Civil War (UNC Press, 2012) 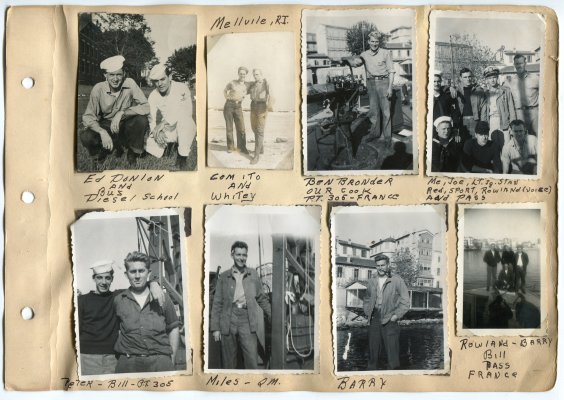 Look Inside a Sailor's World War II Scrapbook
Next Up: Editor's Pick