Women comfort each other as they mourn over the death of a family member who was killed in a bomb blast, at a local hospital in Lahore, Pakistan, on March, 27, 2016.
K.M. Chaudary—AP
By Omar Waraich

For the Christian community in Pakistan’s second-largest city of Lahore, Easter Sunday was supposed to be special. After attending church services, families gathered in the vast Gulshan-e-Iqbal park, one of the city’s biggest. They came with picnic baskets, to enjoy the warm weather of late March. The children took turns on the rides fixed in the park, including a roller coaster. Then the bomber, who had forged his way among them to a swing set, struck.

In the largest terrorist attack to hit Pakistan this year, 70 people were killed and 300 wounded, according to rescue officials. Most of the victims were from Lahore’s beleaguered Christian community. In recent years, they have suffered mob violence — in 2013 a crowd rampaged through a Christian neighborhood, fired up by claims that a young Christian man had allegedly insulted Muslims. And a year ago, on March 15, 2015, 14 Christians were killed and over 70 wounded when suicide bombers struck two churches in Lahore’s heavily Christian Youhanabad neighborhood.

Read More: Outpouring of Sadness and Solidarity for Pakistan as World Reacts to Lahore Blast

Sunday’s attack in Lahore was the deadliest bombing targeting Pakistan’s Christians since more than 100 parishioners were killed at Peshawar’s All Saints Church in August 2013. The militant Islamist group Jamaat-ul-Ahrar, a vicious offshoot of the Pakistani Taliban, claimed responsibility for the latest attack. The same group was responsible for the Youhanabad attacks in Lahore a year ago. Ehsanullah Ehsan, a spokesperson for the group, which sees all non-Muslims as potential targets, said the attack was calculated to show that they still retained the ability to strike deep into Pakistan’s heartlands — particularly Lahore — the political base of Prime Minister Nawaz Sharif.

In recent weeks, Pakistani civilian and military leaders have boasted that they are on the verge of vanquishing the terrorist threat within. After the December 2014 bombing of an army school in Peshawar, which killed over 100 children, there was an expression of greater state resolve against Islamist militants. And in 2015, there was a significant drop in the number of terrorist attacks. However, as the Lahore attack demonstrates, those gains offer no grounds for complacency in the face of terrorists who are prepared to strike the most vulnerable targets in search of the greatest publicity for their acts. In particular, it raises doubts about the willingness of Sharif’s government to take action against militant groups within Punjab itself, where military action won’t be possible but efforts will have to be led by civilian law-enforcement authorities.

For terrorist groups like Jamaat-ul-Ahrar, which has cells throughout Punjab, attacks like Lahore’s Easter Sunday bombing are far easier to mount than against military troops in Pakistan’s tribal areas. They are aware that Pakistan’s Christian community enjoys little protection. “This is the softest of soft targets,” says Ali Dayan Hasan, a human-rights activist based in Lahore and former Pakistan director for Human Rights Watch. “The way to stop such attacks is to act on intelligence beforehand. There is little you can do to protect the park itself during a festival.”

Pakistan has announced three days of official mourning, in solidarity with its small Christian community — out of Pakistan’s population of 200 million, some 2.5 million are Christians. But the attack raises questions about why greater protection wasn’t provided to them before the bomber struck. The park, Lahore’s busiest, was only lightly protected by the presence of private security guards. Officials in the Punjab government have told reporters that they had no information about a particular security threat. That is an implausible defense, considering the same group had targeted the same community on a Sunday during the same month last year in the same city.

The attack comes at a time when the Pakistan government is facing a different threat from religious extremists. In the capital Islamabad, thousands of protestors clashed with police Sunday against the government’s decision to execute Mumtaz Qadri, a police bodyguard who assassinated Salmaan Taseer, the governor of Punjab, in 2011, for defending a Christian woman jailed on blasphemy charges. In the eyes of Qadri’s supporters, their recently executed hero was standing up for Islam and acting against a blasphemer. On Sunday, protesters vandalized public-transport stations and set government vehicles on fire in Islamabad in a bid to make their demands heard. They want Qadri declared a martyr, and for all prisoners accused of blasphemy — disproportionately members of Pakistan’s religious minorities, including Christians — be executed.

Blasphemy in Pakistan has long been a contentious issue, with about 100 people charged annually under the opaque and vaguely worded law.

The protests represent a broadening out of the challenge posed by religious extremists in Pakistan. In the past, the Barelvi sect, to which Qadri’s supporters belong, prided themselves on their mystical interpretation of Islam and fiercely denounced the terrorist attacks carried out by jihadists who adhered to a more extreme and literalist creed. Now, in their own ways, Qadri’s supporters are mounting parallel challenges to the Pakistani government. On the one hand, the terrorists favor the use of suicide bombers, who manage to remain undetected until it is too late. But the religious extremists, who pride themselves on eschewing jihadist violence, are willing to destabilize the Pakistani state by deploying mob violence and threatening to lay siege to the government.

To deal with these twin threats, the Pakistani government will have to offer religious minorities greater protection, bring the attackers to justice, assert the rule of law with fresh resolve and send a message that it won’t capitulate to either form of extremism — be it the mob, or the bombers. To that end, it may mean that Sharif’s government may have to overcome its resistance to taking action against militant groups based on its own patch.

“That position is no longer tenable,” says Hasan, the human-rights activist. “There will have to be a weeding out of these elements from their bases in southern Punjab.” Pakistan’s fight against extremism, its civilian and military leaders should realize, is far from over. 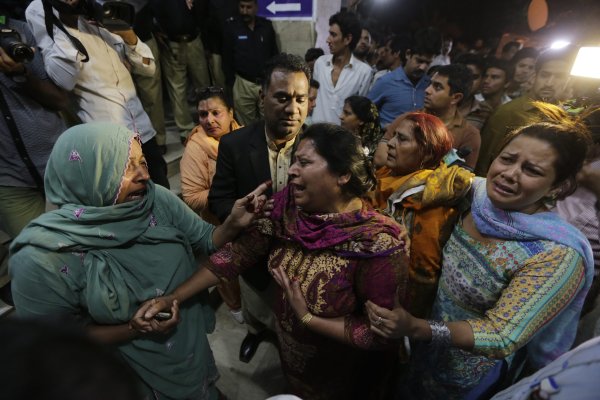 Witness the Aftermath of the Pakistan Park Bombing
Next Up: Editor's Pick