Despite a trifecta of convincing victories, Bernie Sanders did not prove on Saturday that he can win the Democratic nomination.

But he did show Hillary Clinton and the Democratic Party that he can’t be ignored.

In his campaign to reshape the left and win the Democratic nomination, Sanders has continued to captivate liberals, a key voting bloc Democrats will need in a general election. On Saturday, he earned landslide victories in Washington, where he won with a whopping 73% of the the vote, and in Alaska, where he won 82% of the vote. In Hawaii, Sanders won with nearly 70% of the vote. As a result, Sanders slightly narrowed the gap in pledged delegates behind Clinton, now notching 975 to her 1,243 as of Sunday morning.

This weekend’s contests will likely give Sanders’ campaign more oxygen heading toward the Democratic convention—and a bigger say in the party’s platform in the months ahead.

“We are on a path toward victory,” Sanders said at a rally on Saturday evening in Madison, Wisconsin. During his speech, his wife, Jane O’Meara Sanders, interrupted him to tell him the news that he had won in Washington.

“Alright, are you ready for a news alert? We just won the state of Washington!” Sanders said. “We are making a significant inroads in Secretary Clinton’s lead.”

Sanders is not on a clear path to winning the nomination. He will need to win at least 57% of the remaining pledged delegates to earn a majority of that count by the end of the primary voting in June, and would almost certainly have to convince many of Clinton’s committed superdelegates to switch their allegiance. Saturday’s states were favorable to Sanders; many of the upcoming contests, like Maryland, Connecticut and others will not be.

But however he has fared, Sanders’ proven ability to win delegates makes him a powerful voice in the coming months. Clinton may be turning toward the general election, but Sanders will continue to shape the race, calling for single-payer healthcare and free college, and attacking Clinton for her Wall Street ties.

There are signs that Sanders may already be looking beyond the Democratic convention in July.

His advisors have begun discussing demands they may make at the Philadelphia convention if their candidate is not the nominee, including pushing the Democratic Party to adopt new resolutions against using super PAC money in primary races.

Sanders himself has envisioned realigning the Democratic Party and overhauling many of the values and tenets ushered in by President Bill Clinton in 1992. The former president’s wing of centrist Democrats advocated for welfare reform and ultimately, free trade deals that Sanders despises.

“If I can’t make it, we want to completely revitalize the Democratic Party and make it a party of the people rather than one of large campaign contributors,” Sanders said in an interview last week.

Sanders has won 13 states out of the first 31 contests against Clinton, but many of his victories have been by smaller margins, as in Michigan or Oklahoma, and or in smaller states where there are fewer delegates to go the convention, like Alaska or Utah. Clinton, meanwhile, has won huge victories in large states like Florida and Texas, giving her an important leg up in the delegate count against Sanders.

Going forward, Sanders will continue to campaign hard in Wisconsin, Wyoming and New York. He has finally opened an office in New York and still hopes to win the state that Clinton represented in the Senate for eight years.

Sanders’ fundraising operation will sustain him through the Democratic convention: he has already raised some $140 million from millions of donors. And Sanders’ victories on Saturday mean he can continue to have a loud voice as the Democratic nomination lurches toward July. 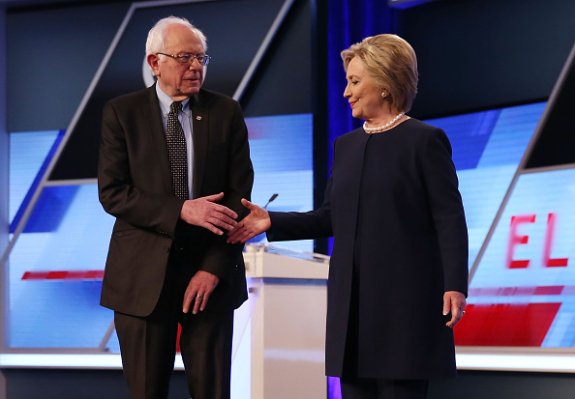 Why Bernie Sanders Isn't Dropping Out
Next Up: Editor's Pick