As President Obama finally “buried the last remnants of the Cold War” in Havana, jihadi terrorists were unleashing suicide attacks against innocent civilians in the heart of Europe. What a powerful reminder that the old wars against communism are long behind us, replaced now by a much more insidious and unpredictable form of warfare, one that strikes terror in the hearts and minds of citizens, whether near or far removed from the latest carnage.

This fear of the undetected radical in our midst is easy fodder for the overheated U.S. elections season. Leading candidates like Ted Cruz and Donald Trump fell over themselves to demand Obama’s return to Washington to “keep us safe,” as if our sprawling national security apparatus shuts down when Air Force One is out of town. Fortunately, the White House is long accustomed to walking and chewing gum at the same time.

The real battle here is over symbols—of tough talk and bluster, on the one hand, and resilience and “steady hands” on the other, as candidate Hillary Clinton put it in her speech at Stanford University.

Electoral posturing aside, there is a more serious message that our leaders are trying to convey when they react to another terrorist attack. “It’s very important for us not to respond with fear,” Obama said when asked why he did not abandon his historic trip to Cuba in light of Tuesday’s bombings. In addition to deploying drones, detectives and deadly strikes against these terrorist groups, he remarked, we need to demonstrate determination to maintain “our values of liberty and openness and the respect of all people.”

This is precisely the message Obama conveyed during his visit to our former enemy, Cuba, and our intermittent friend, Argentina. His remarkable speech to the Cuban people, visits with human rights defenders and entrepreneurs, and friendly gestures—such as doing the wave at a baseball game in Cuba and dancing the tango in Argentina—were powerful instruments to win over hearts and minds, not only in Cuba but around the world, about American intentions and values.

It is this kind of comprehensive package of economic, political and security measures that can turn the tide against violent extremism.

Latin America should know. Its history is replete with internal conflicts driven by the despair of the deprived against the despotism of dictators and corrupt elites. The overlay of Cold War power struggles between the Soviet Union and the United States further fueled the flames of violence.

Now, after decades of conflict, military rule and abject poverty, Latin America is an emerging region of economic growth and democratic stability. Colombia is close to settling the hemisphere’s longest armed conflict. Even socialist Cuba, which is struggling to enter the 21st century as neither friend nor foe of the United States, understands its future depends on a more open economy and better ties with all of its neighbors. Under the more pragmatic leadership of Raul Castro, it has abandoned the role of renegade in world affairs, renounced any support to international terrorism and pledged cooperation on law enforcement and anti-trafficking. It also has largely succeeded in delivering basic social services to its citizens, including free health care and education, while failing to protect fundamental political rights. In this latter area, it has some catching up to do with its neighbors.

Meanwhile, the radicalization of disaffected youth in the Middle East is occurring in countries long known for their hardline authoritarian rule, suppression of women’s rights, silencing of free media, and coddling of religious fanaticism. The silent majority of Arab citizens, who long for greater freedoms and democracy, are once again marginalized as extremists battle over which armed group will wield the power of the state. Might they have something to learn from the story of democratization in Latin America, where radical terrorism is largely contained and citizens take their complaints peacefully to the voting booths or the streets?

This history explains why so much is at stake in how the United States responds to perceived attacks against its way of life. Do we choose the path of surveilling Muslim communities, as Cruz suggests, or barring Muslims from our borders, as Trump avows? This, some say, is precisely what our enemies want, so they may recruit more disaffected followers to their diabolical cause. Or do we have the confidence in our own values of open competition of ideas, freedom of religion and rule of law to offer the world an alternative model for achieving both peace and security? Much depends on the outcome of our own democratic choices this November. 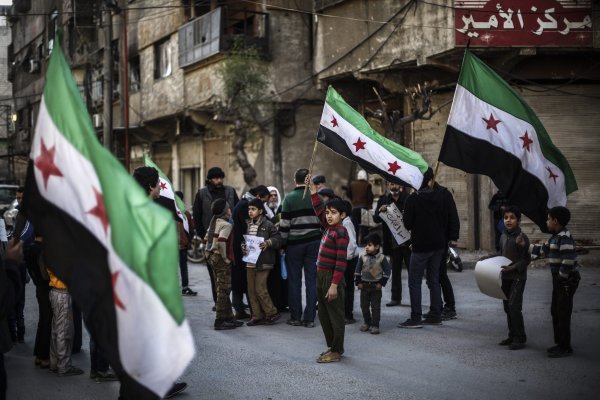 Peace in Syria Requires National Unity
Next Up: Editor's Pick