Malaysian police stand guard before the arrival of Prime Minister Najib Razak during a joint police-army exercise at a shopping mall in Kuala Lumpur on Feb. 22, 2016
Mohd Rasfan—AFP/Getty Images
By Simon Lewis

Malaysian authorities say they have foiled a plot involving at least 15 people, including a police officer and an airplane technician, who were allegedly attempting to obtain bombmaking materials and launch terrorist attacks in the Southeast Asian country.

Citing a statement from police on Thursday night, the Associated Press reports that 15 people suspected to be members of the Islamic State of Iraq and Greater Syria (ISIS) were arrested over three days beginning on Tuesday, the day of multiple bomb attacks in Brussels that have been claimed by the group.

Malaysia’s national police chief, Khalid Abu Bakar, said in the statement that the suspects — ages between 22 and 49 — include a mosque cleric, a student, the police officer and technician, and four women believed to be planning to travel to Syria to join ISIS.

A Malaysian man fighting with the group in Syria had ordered those arrested this week to carry out attacks on Malaysian soil, AP said.

Muslim-majority Malaysia is on high alert after attackers killed two civilians in the center of neighboring Indonesia’s capital in January. Malaysia has detained more than 160 people allegedly linked to ISIS in the past two years. 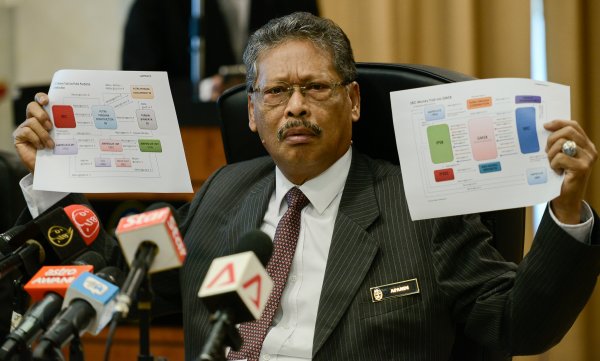 Malaysia Suggests Caning Those Who Reveal 'State Secrets'
Next Up: Editor's Pick