Everything You Need to Know About the Oculus Rift

After years of development (and hype), the Oculus Rift is finally coming out March 28. The $600 virtual reality headset is the first in a series of mainstream devices coming out this year. Here’s a guide to understanding what exactly it is and isn’t:

The first high-fidelity, PC-powered, cable-tethered virtual reality headset to hit the market. It stands in competition with the HTC Vive ($799, due April 5) and Sony’s PlayStation VR ($499 bundled with camera and controllers, due in October).

Yes, less expensive alternatives like Google Cardboard and the Gear VR (by Samsung and Oculus) have been around for awhile now at the impulse end of the market. But the Rift is powered by PC processors orders of magnitude more powerful than VR’s entry-level models. It’s the headset most responsible for all the virtual reality chatter these past few years. And it’s the approach Facebook CEO Mark Zuckerberg found persuasive enough to pay $2 billion for, snatching up Rift parent company Oculus VR in March 2014.

MORE: Review: The Oculus Rift Is Finally Here, But Is It Any Good?

What can I do with it?

Imagine strapping on a pair of safety goggles—you know, the kind you can buy at any hardware store with wide elastic straps and that lie flush against your face around your eyes and nose. Now imagine a posher, more comfortable version of those, only the goggle portion protrudes several inches further from your face, plus it’s solid black, to block any external light.

Instead of gazing at a flat plastic wall, you’re peering through a pair of special lenses that refract the light from twin tiny high-end video screens (sitting just behind the lenses), which work with motion sensors in the headset to create the illusion of a wraparound alternate reality as you naturally swivel or nod your head.

Those alt-realities at launch consist mostly of games at this point: arcade shooters, flight sims, racers, a hack-and-slash, an action-roleplaying game, real-time strategy and tower defense stuff, a pinball thing, a tennis sim, air hockey, a puzzler, some interactive stories and outliers like a “bomb-defusing” party game.

The Rift will launch with 30 games, and Oculus promises you’ll be able to pick from over 100 Rift games by year’s end.

How much does it cost?

MORE: These Are the 5 Best Oculus Rift Launch Games

Where and when can I buy it?

The Rift goes on sale March 28, but don’t expect to find a headset lying around if you didn’t preorder back in early January. Orders processed mere days after the Rift went on sale January 6 may not be processed for weeks after the official launch date, according to Oculus.

If you want to reserve a spot in the backorder queue, Oculus says you can grab the Rift from Oculus direct at Oculus.com, or through retailers like Amazon, Best Buy and the Microsoft Store.

What do I get with the headset?

You also get a copy of studio Playful’s Lucky’s Tale (a whimsical run-and-jump adventure game), and if you preordered the Rift, a copy of CCP’s EVE Valkyrie (an online-focused arcade space sim).

What are the tech specs?

And the sensor/camera includes:

The Rift’s recommended specs are as follows:

Oculus Rift games will run on lesser hardware, but you then you risk running into performance issues that, given how critical high and consistent frame rates are to soothing your hoodwinked visual cortex, could make your feel ill.

Note that the most impactful (and expensive) component above is the video card. If you already have a PC and plan to upgrade just the video card, models based on Nvidia’s GTX 970 or AMD’s R9 290 GPUs sell in the mid to high $300s, depending on the manufacturer and processor clock speeds.

If you plan (or need) to buy a completely new PC, “Oculus Ready” systems run in the vicinity of $1,000, but you can save a few bucks if you buy them bundled with the Rift headset.

MORE: Why Virtual Reality Is About to Change the World

Can my kids use it?

Oculus says the Rift “is not intended for children under 13 years old.”

Why 13? Because 12 to 13 is the age range VR manufacturers have settled on absent guidance from medical professionals or data from long term usage studies. Oculus CEO Brendan Iribe has said the company went with 13 because that’s where Facebook (which owns Oculus) draws the line.

Will it make me dizzy or sick?

You won’t know until you try it. Games that make some ill, others have no trouble with. The law of averages does seem to apply here, and to that end, Oculus has established a “Comfort Ratings” system designed offer general guidance.

Look for these ratings on each Oculus game:

How do I clean it?

Very carefully, and with nothing more than a dry microfiber cloth. Oculus also says to keep the headset, sensor and remote out of direct sunlight.

Aren’t there supposed to be touch controls?

Yes, one for each hand, but they’ll cost extra, and won’t be available until the second half of 2016. Until then, Rift games are restricted to input from the headset itself and the Xbox One gamepad. 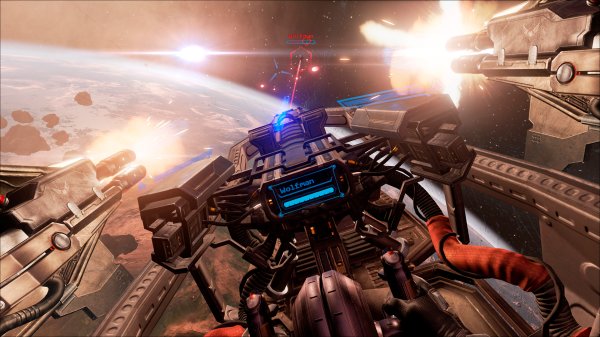 These Are the 5 Best Oculus Rift Launch Games
Next Up: Editor's Pick