The jokes are big, fat and broad in My Big Fat Greek Wedding 2, the perhaps-not-so-long-awaited sequel to the 2002 girls’ night out hit. That’s not the problem: Broad humor has a place in the world of movies, maybe now more than ever. When Andrea Martin, as sassy, worldly wise Aunt Voula—a role she also played in the earlier film—offers some R-rated relationship tips to Nia Vardalos’ Toula, now long married to non-Greek hunk Ian (John Corbett), you laugh not because the lines are particularly funny, but because Martin just goes for it even though they’re not. Her willingness to run with the ridiculousness of it all is the key. When she arches an eyebrow or purses her lips, she could be something out of a Chuck Jones cartoon, the result of a few judiciously placed strokes of pen and colorful ink.

So what, exactly, is the problem with My Big Fat Greek Wedding 2? It’s not really the dumb, broadly stereotypical jokes—gags about the “oiliness” of the Greek people, about how stupid, closed-minded American types refer to “moussaka” as “mouse-kaka,” about the way people who have been married for a long time tend to roll their eyes behind each other’s backs, or even in front of their fronts. Those jokes are mostly just toothless and silly. The plot is barely serviceable, but it will do, and most of the first movie’s cast has been reassembled under its flimsy umbrella: Patriarch Gus (Michael Constantine) learns that his 50-year-plus marriage to Maria (Lainie Kazan) is invalid. He wants to make things official, but she refuses—unless he proposes to her in a suitably romantic fashion. Vardalos’ Toula, ever the peacemaker, frets and worries and tries to intercede. Meanwhile, husband Ian feels neglected, while daughter Paris (Elena Kampouris) feels smothered by her mother’s amped-up anxiety.

Vardalos (who also wrote the script) mugs and pouts and works hard at being adorable, though that won’t be a surprise to anyone who saw the first movie. In fact, it’s not so much the “what” that kills My Big Fat Greek Wedding 2, it’s the “how”: Director Kirk Jones (What to Expect When You’re Expecting, Nanny McPhee) puts long stretches of space after every joke, as if he were making room for an imaginary laugh track. Every gag is a half-beat, or more, behind. And he can’t navigate the story’s shifts—and there are many—between jumbo-sized comedy and squishy sentimentality. The movie, though there’s some sweetness in its heart, tips too heavily toward the latter. Only Martin, speed-walking through it with her randy one-liners and oversized winks and nudges, emerges unscathed. Make way as she comes through: You don’t want to get broadsided. 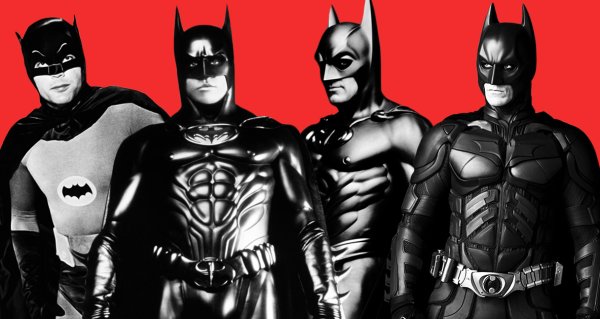 See the Evolution of the Batsuit
Next Up: Editor's Pick