U.S. Vice President Joe Biden congratulates Judge Merrick Garland after he was nominated by U.S. President Barack Obama to the Supreme Court in the Rose Garden at the White House, March 16, 2016 in Washington, DC. Garland currently serves as the chief judge of the United States Court of Appeals for the District of Columbia Circuit and if confirmed by the US Senate, would replace the late Supreme Court Justice Antonin Scalia who died suddenly last month. Chip Somodevilla—Getty Images
Chip Somodevilla—Getty Images
By Maya Rhodan

“There is no Biden rule. It doesn’t exist,” he said, alluding to a speech he gave in 1992 calling for a delay in any Senate considerations of Supreme Court nominees until after the presidential election had finished. Senate Republicans have cited the so-called “Biden rule” as an excuse for inaction on President Obama’s nomination to the court following the death of Justice Antonin Scalia.

On Thursday, the former Senate Judiciary committee chairman called the assertion “frankly ridiculous.” The only one rule he followed when considering Supreme Court nominations, he added, was “the constitution’s clear rule of advice and consent.”

The Vice President offered a scathing rebuke of Senate Republicans’ actions on Thursday, arguing that leaving the Supreme Court without a full bench “fractures our country,” sending cases back to lower courts and perpetuating lengthy legal battles.

He also said a divided Supreme Court would be unable to establish “uniform federal law” and unnecessarily put serious issues like civil rights, freedom of speech, and legal questions in the balance. “The American people deserve a Supreme Court of Nine,” he said.

President Obama nominated Merrick Garland, the Chief Justice of the United States Court of Appeals in D.C., as his pick to replace Justice Antonin Scalia on the Supreme Court in mid-March.

On Thursday, Biden said the president purposefully chose Garland, considered a moderate pick, to avoid gridlock. Republican leadership in the Senate, however, has refused to schedule or consider hearings.

Biden has found himself at the center of the Supreme Court stalemate thanks to his 1992 speech. At the time, Biden called for a delay until the presidential election ended, to avoid tainting the process with bitter partisanship.

“Where the nation should be treated to a consideration of constitutional philosophy, all it will get in such circumstances is a partisan bickering and political posturing from both parties and from both ends of Pennsylvania Avenue,” he said at the time.

The circumstances were notably different— there was no Supreme Court vacancy to fill and the nation was further along in the election season—but Senate Republicans have cited his argument as a rule to suggest the president should delay nominating a potential SCOTUS nominee.

“The Senate will continue to observe the Biden Rule so that the American people have a voice in this momentous decision,” Senate Majority Leader Mitch McConnell has said.

On Thursday, Vice President Biden said the Senate has a Constitutional duty to consider Judge Garland. “Voting no is always an option, he said. “But saying nothing, seeing nothing, reading nothing ,hearing nothing and deciding in advance simply to turn your back is not an option the Constitution leaves open.” 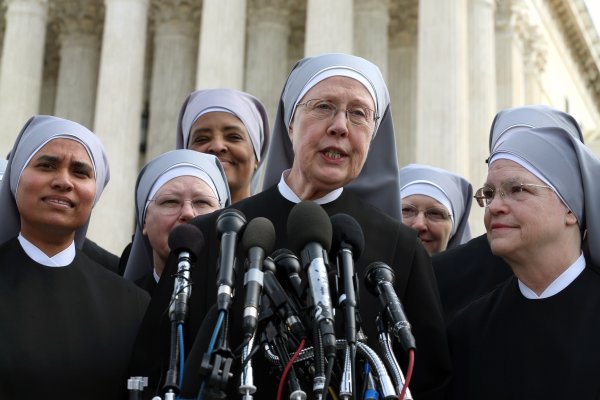 Why I Support the Little Sisters' Right to Religious Freedom
Next Up: Editor's Pick