Steve Martin was riding his bike alongside Manhattan’s West Side Highway a couple of summers back when the idea first struck him. He and singer-songwriter Edie Brickell, his collaborator on the Grammy-winning 2013 bluegrass album Love Has Come for You, had been toying with the notion of writing a Broadway musical together. They felt their music–rootsy, melodic, often narrative-driven–would adapt well to the theater. All they needed was a story.

Martin’s bicycle epiphany was to use one of their songs, “Sarah Jane and the Iron Mountain Baby,” as a jumping-off point. With Brickell’s encouragement, he set about writing a book for the show–a story set in Asheville, N.C., at the end of World War II, when a hometown boy returns from the war and then, via flashbacks to the 1920s, discovers a secret about his past. They wrote the score together: Martin–an accomplished banjo player since his teenage years–knocking out tunes, Brickell–best known for her 1988 hit “What I Am” with her band New Bohemians–embellishing them and writing the lyrics. Now, after a string of tryout productions, including a 2014 run at San Diego’s Old Globe Theater, their show, Bright Star, has opened on Broadway.

They make an odd, but oddly compatible, couple, chatting about the show backstage at the Cort Theatre in between rehearsals one recent afternoon. “I feel like I’m in Enter Laughing,” Martin quips after wending his way through the backstage clutter to the cramped dressing room where we’re gathering. Brickell, 50, is soft-spoken, earnest, a little tight; when she casually mentions “Paul”–her husband of 23 years Paul Simon, who is also friends with the comedian–she quickly apologizes for name-dropping. Martin, though often publicity-shy, is surprisingly voluble, politely deferential to his partner and obviously gung-ho to talk up their new venture.

It grew out of their collaborative chemistry (they had been friends for years before teaming up on their first album) and a mutual affection for Broadway musicals. Growing up in suburban Orange County, California, Martin doted on the original-cast albums of shows like The Music Man (he memorized the entire opening number), West Side Story and The King and I. “A song like ‘Getting to Know You’–I can’t even sing it without crying,” he says. “Then, when I saw the show for the first time and found out she’s singing to children, it’s even more moving.”

Brickell, who grew up in Dallas, found a soul mate in Julie Andrews in The Sound of Music. “When I was a little girl, I tried to get out of the house as much as I could, just to walk through nature alone and sing,” she says. “So when I first saw that character emerge, singing, running through the hills, I completely related to what she was doing. It sounds so corny, but I celebrated nature as a child. And it sang back.”

Bright Star marks a re-emergence for Brickell, who burst onto the scene in the late ’80s but has spent most of the past couple of decades raising three kids with Simon in Connecticut. “This came along at the exact right moment,” she says, “when my kids are going off to college and I could focus on such a big undertaking.”

For Martin (the father of a 3-year-old daughter with his second wife Anne Stringfield), it is merely the latest iteration in a protean career that has had more twists than the animal balloons he used to brandish as an absurdist, “wild and crazy” stand-up comedian in the 1970s. He famously quit stand-up cold turkey in 1981 and moved on to other pursuits–none of them involving animal balloons. He starred in movies (The Jerk, Pennies From Heaven), wrote screenplays (Roxanne, L.A. Story) and stage plays (Picasso at the Lapin Agile) and acted in others (Waiting for Godot with Robin Williams). He turned his banjo obsession into a late-blooming music career, recording and writing songs and touring with bluegrass legends like Earl Scruggs. He’s written best-selling novels (Shopgirl) and is a notable art collector (he sold an Edward Hopper painting in 2006 for $26.9 million). All while retaining his comic cred with frequent Saturday Night Live appearances and inventive guest spots on late-night talk shows.

Though Martin had no formal music training and doesn’t read music, Brickell found him a talented and supple writing partner. “Anything that our story needed, any emotional experience, it’s as if Steve had a magic hat and pulled out a banjo tune that worked perfectly for that emotion,” she says. “He’s very musical. He’s actually a very good singer too–he has a soft, melodious voice, beautiful tone.” But the task of pulling together a full-blown musical (a rare one with a totally original story, not based on a movie or book) proved arduous. Characters changed, new songs were added (only three remain from the first version), the complicated story line was refined. “People say, You’ve never written a musical before,” says Martin. “I say, ‘Oh, yes, I have. I’ve written 12–all called Bright Star.’ Meaning it’s been rewritten and changed so much. The learning process keeps going on and on and on.”

At 70, Martin professes to be slowing down–he has stopped touring with the bluegrass group Steep Canyon Rangers, limiting himself to occasional concerts. But in February he excited old fans by making a return to stand-up–as the surprise opening act for Jerry Seinfeld at New York’s Beacon Theater. (“I’m here tonight because of that old showbiz saying,” he said. “Never lose a bet to Jerry.”) He downplays the gig’s significance–he never stopped doing comedy onstage, he points out, on his bluegrass tours and in a stage show he occasionally does with pal Martin Short. And he has no nostalgia for those heady 1970s, when he was selling out arenas and launching national catchphrases as arguably the most popular stand-up comic of all time.

“Looking back, it still gives me a little stress,” he says. “I was very alone at that time. Traveled alone. Struggled with creative issues. When I stopped, I was really ready to stop, both through exhaustion and creative block.” Nor does he have complaints about the friendly reception his very uncomedic ventures have gotten ever since. “There wasn’t a lot of blowback or resistance,” he says. “It was strange. I expected it with Shopgirl and didn’t really get it. I had the same feeling about music but didn’t really get it. The bluegrass world is very welcoming.”

Broadway isn’t always so welcoming, especially for a pair of musical-theater outsiders toting a new show with lots of plot and down-home sentiment and not a single rapping Founding Father. But who knows–wilder and crazier things have happened. 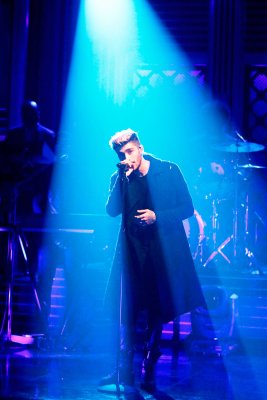 Review: Zayn Goes in a New Direction on Solo Debut Mind
Next Up: Editor's Pick