Trump's New Teleprompter Reveals the Method In His Populist Madness

Let it be recorded that on March 21, 2016, addressing the American Israel Public Affairs Committee in Washington, D.C., Donald Trump used a teleprompter. This is progress. It shows that Trump understands that, on occasion, care must be exercised in his choice of words. Not that he had much to say. He played within the usual pander lines observed by his fellow candidates. There were nuanced differences with Hillary Clinton and John Kasich, both of whom were very well received by this crowd, but the essential message was the same: Israel is our BFF, it will decide when and how to make peace with the Palestinians, and Iran had better be careful about anti-Israel aggression in word or deed.

And while Trump speaking with a teleprompter doesn’t quite approach the awe and wonder inspired by a collie walking on its hind legs, it does serve to illuminate an important point about his presidential campaign. Trump has seemed totally free form, solipsistic and despicable, but there is a method to his madness. Indeed, he has constructed the purest populist agenda, drawing from the excesses of left and right, since Georgia’s Tom Watson led the Populist Party into the racial fever swamps over a century ago. There is one gigantic exception: the anti–Wall Street rhetoric usually at the heart of populism has been limited to the suggestion that fat cats are working the system. But for the rest, Trump has found a way to provide heterodox comfort food to assuage the fear and loathing of the white working class. Each of his dog whistles has been pitch-perfect and, I suspect, carefully selected.

Trump opened with an appeal to the nativism at the heart of conservative populism. He was at it years ago, with his ugly birther campaign against Barack Obama. His announcement speech was an anti-Mexican tirade, citing the “rapists” and “criminals” pouring across the border. Trump doesn’t go in for anachronistic black-white racial fears; he plays to more 21st century fears of Mexicans and Muslims, the latter reinforced by the Brussels terrorist attacks. He is appealing to the inchoate gringo fear that America is becoming a mongrel place.

But Trump’s other signature issue–protectionism–comes from the populist left, especially labor unions. This is an issue that has been simmering in Democratic primaries, unsuccessfully, for 30 years. In 1992, during his campaign, Bill Clinton had the courage to try to sell NAFTA to a union hall of Detroit autoworkers. Years later, he told me he wasn’t sure he would be able to do that again, given the rising tide of plant closures and lagging wages. He still believed free trade was the right course, but the low prices at Walmart were an abstraction compared with the pain of job losses and dislocation. Now Hillary Clinton has, sadly, followed Bernie Sanders and Trump down the protectionist road.

Trump’s populist borrowings from the left are the cause of the Republican establishment’s nervous breakdown. The mainstream heart of conservatism has been the Paul Ryan school of budget austerity, especially when it comes to old-age entitlements. Trump not only promises to maintain Medicare and Social Security but has also dropped broad hints that he will preserve and protect universal health care, which he will call something other than Obamacare.

And Trump has trampled the jingoist overseas interventionism of the neoconservatives, while covering his tracks with bellicose “kick the [tar] out of” rhetoric. A few weeks ago, a South Carolina businessman told me he and his friends had felt “liberated” when Trump called George W. Bush a liar and labeled the Iraq War stupid. “We knew the war was wrong,” he said, “but we’re loyal Republicans and couldn’t say it.”

There are some Republican restraints that Trump will abide, at least until he is nominated. He is pro-life, sort of, with a naughty tip of the cap to Planned Parenthood. He is also, for now, a strict Supreme Court constructionist, promising a list of conservatively correct nominees. I’d been harboring the perverse hope that Trump might skewer Republican leader Mitch McConnell for gridlock as usual with regard to the Senator’s refusal to grant Supreme Court nominee Merrick Garland a hearing. It’s the sort of D.C. shenanigan that inflames the Trumpist sect–but torching the memory of Antonin Scalia is business too risky for the moment.

After the nomination is anyone’s guess. But the use of the teleprompter will surely be the first of many politically correct adjustments. We must prepare ourselves for the subtler dangers of a conventional Donald Trump. 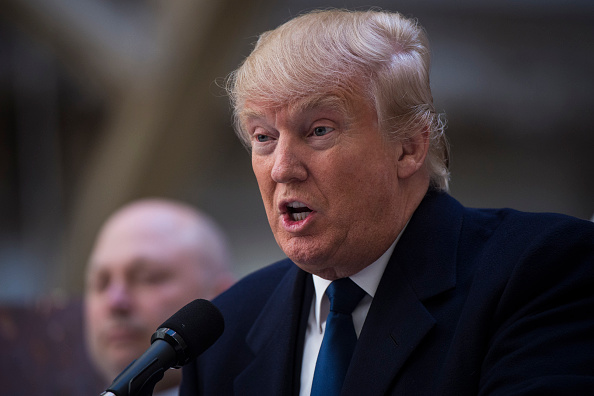 Why Wisconsin Might Be #NeverTrump's Last Stand
Next Up: Editor's Pick