The Terrorist Threat From ISIS May Be About to Get Worse

A member of the special police forces stands guard outside the Council Chamber of Brussels during investigations into the Paris and Brussels terror attacks on March 24, 2016.
Kenzo Tribouillard—AFP/Getty Images
By Karl Vick

The fallout from the ISIS-claimed attacks in Brussels is all bad and certain to get worse. As ISIS loses territory in Syria and Iraq, it lashes out with terrorist strikes abroad, especially against countries supporting the military campaign against it. Its targets are “soft”–the airport ticketing area where two bombs killed 11 on March 22, the subway at rush hour where 20 more died the same day–and somehow made more vulnerable by the incompetence of Belgium’s authorities, who needed four months to capture the last of the plotters of the Paris attacks. “The most wanted man in Europe,” Salah Abdeslam, was found 100 meters from his childhood home in Molenbeek, the Muslim neighborhood that stands hard by the clean and orderly headquarters of the European Union. The dream of a united Europe, sorely stressed over the past year by the arrival of more than a million migrants and refugees, mostly from the Middle East, has grown brittle to the point of breaking. The Brussels attack will strain it further.

For officials who track terrorism, a whole new level of alarm lurks just beyond the horizon. After the Brussels attack everyone had been expecting–“What we feared has come to pass,” said Belgian Prime Minister Charles Michel–the capital city went into lockdown, which made sense. But so did the country’s nuclear plants. At the Doel power station 43 miles (70 km) to the north and Tihange 57 miles (92 km) to the southeast, employees were abruptly sent home, leaving only a skeleton staff to run seven reactors. Why? “Some 1,000 people work on sites like these,” a spokeswoman for the country’s Federal Agency for Nuclear Control explained to a Belgian newspaper. “Their backgrounds are all checked thoroughly, but better safe than sorry.”

The extraordinary measure–all but a few employees were told to stay away until further notice–did not come out of the blue. Recent weeks have brought growing evidence that ISIS is actively seeking weapons of mass destruction, including nuclear material. The evidence is piecemeal but alarming to counterterrorism experts who’ve watched ISIS grow increasingly aggressive. And the most dramatic evidence of a possible nuclear plot surfaced, where else, in Belgium–a country with a spotty record both of stopping terrorism and protecting its nuclear facilities.

While investigating the Paris attacks, which had been plotted in Molenbeek, police discovered an unsettling bit of video footage in a suspect’s home. A camera had been hidden in bushes and tilted to capture the front of the residence of a senior researcher at the Belgian Nuclear Research Centre. That facility contains highly enriched uranium, which could be used in a crude nuclear weapon. The site also contains radioisotopes, molecules that carry a specific radioactive energy. They’re intended for medical use, but in potent forms they could be dispersed in a crude explosive known as a dirty bomb.

A senior U.S. official tells TIME that it remains unclear what nuclear materials the ISIS members were hoping to obtain (perhaps as ransom for a kidnapped family member, which would account for the camera recording the household’s comings and goings). But what’s not in doubt is that U.S. officials now consider radiological terrorism–the makings of a dirty bomb–the more immediate danger.

The reason is the sheer number of locations where radioisotopes might be obtained, coupled with ISIS’s attraction as a movement. It’s not just nuclear plants. There are thousands of places around the globe where radioactive material is stored, often carelessly: hospitals, food-irradiation centers, industrial sites. And there are tens of thousands of people supporting ISIS around the world, often secretly. It may be only a matter of time before an Islamic State supporter emerges not in the ranks of the San Bernardino County health department–as Syed Rizwan Farook did–but at a workplace that contains the makings of a dirty bomb or worse.

In fact, it’s already happened–in Belgium. The country of 11 million remains Europe’s per capita leading supplier of foreign fighters to ISIS. One of them, Ilyass Boughalab, 26, was a technician at the Doel nuclear plant when he left in 2012 to fight for ISIS in Syria. At the time, the Sunni extremists remained intent on capturing territory and urged all volunteers to join it on the battlefield, where Boughalab perished. But after the U.S. began air strikes, the group reacted by launching terrorist operations–in unprecedented numbers.

“Al-Qaeda used to rein people in,” notes Clint Watts, former executive officer at West Point’s Combating Terrorism Center. Osama bin Laden’s group was selective, in terms of both its membership and its targets, which could take months to winnow down, requiring communications that authorities could sometimes detect. ISIS works differently. When the group’s followers in Egypt’s Sinai Peninsula planted a bomb aboard a Russian jetliner on Oct. 31, killing 224 people, the leadership of ISIS learned about it on the news, just like everyone else. What al-Qaeda had been trying without success to do for 14 years following 9/11, ISIS’s Sinai branch slapped together in weeks without alerting the head office.

“I remember 10 years ago being in the Combating Terrorism Center, and we’d be focused, like they [al-Qaeda] were, on one big plot,” says Watts. “Now it’s just happening all the time, and it’s because ISIS is not trying as hard in the ways al-Qaeda did. It’s about volume and aggression and pushing.”

The fear is that sooner or later, one of those attacks will include nuclear materials. “They don’t have to go to Iraq or Syria to get the material,” says Andrew Bieniawski, an expert at the Nuclear Threat Initiative (NTI), which advocates for containing atomic materials. “You can go to a hospital in California or Washington or New York, and they can get access to these facilities that are really not secured.” Somehow, medical centers escaped the security mania that followed 9/11. A 2012 Government Accountability Office report found that 4 of 5 hospitals had not seriously upgraded security on powerful radiologicals. At one, the access code for a “secure” room was written on the door frame next to the keypad. (To snap hospitals to attention, NTI is pointing out the massive liability questions a medical center would face from an attack using one of its isotopes.)

Security is even looser overseas. Of more than 130 countries with known radiological material, only 23 have committed to securing it. All 23 will be at President Obama’s final Nuclear Security Summit in Washington on March 31, where for the first time the threat of preventing a dirty bomb will get more emphasis than securing the potentially wayward warheads known as “loose nukes.” Warheads remain infinitely more dangerous. The only part of a dirty bomb that would kill directly would be the explosive charge that disperses the radioactive material. But that material could render a square mile of central New York City uninhabitable for decades, handing the terrorists a lasting symbolic victory, one with devastating financial impacts. It would also–especially in the current political environment–raise public alarm to levels not seen after 9/11.

“If either Paris or San Bernardino had had a radiological component, it would have been at least 100 times greater,” says the senior U.S. official. Speaking shortly before the Brussels attacks and the sudden emptying of Belgian nuclear plants, the official noted that U.S. forces in February captured a former Iraqi military specialist in chemical weapons, Sleiman Daoud al-Afari, who revealed that ISIS had managed to create mustard gas in powder form. It marked the first time a terrorist group has created its own weapon of mass destruction since the Japanese doomsday cult Aum Shinrikyo released its own sarin nerve gas in the Tokyo subway in 1995.

ISIS might also qualify as a doomsday cult. Its religious ideology envisions “a fairly near-term final war” with the U.S., notes Matthew Bunn, a nuclear expert at the Harvard Kennedy School. “One would think if you envision an Armageddon with the United States that you would want some pretty powerful weapons.”

ISIS may already have some. When the group overran the Iraqi city of Mosul in 2014, it gained access to some 90 lb. (41 kg) of radiological material at a local university. But moving it across borders risks discovery by the radiation sensors put in place around much of the globe after 9/11. The unsettling fact appears to be that for ISIS, the surest route to a terrorist attack using nuclear material is the route that’s proved the easiest: an employee of a workplace with the makings of a dirty bomb close at hand simply reaches out and takes it.

That’s hard to guard against. The U.S. government trains local law enforcement to repel armed assaults, and in the hours after the Brussels attacks, police with submachine guns took up positions outside the plants at Doel and Tihange. But from 1993 to 2014, according to the International Atomic Energy Agency, atomic materials were stolen or trafficked more than 400 times. And not once was anyone aware of the theft until it was too late.

“We’re not aware of any instance in which you’ve had, you know, six ninjas coming into a site, overwhelming the local guard force and then making off with kilograms of material,” says the U.S. official. “All the thefts we know of, they’ve all been insiders.” As with Europe as a whole, the real threat is likely to come from within. 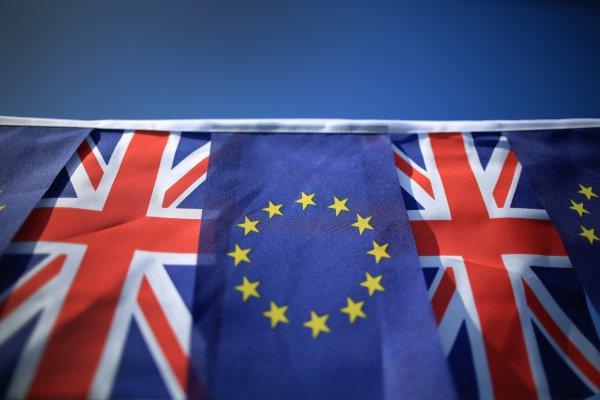 Brussels Attacks Raise the Chances of Brexit
Next Up: Editor's Pick