The efforts to deny Donald Trump his Republican Party’s nomination got a bit tougher with the billionaire’s win Tuesday in Arizona, and a repeat in Wisconsin in two weeks could all but shut down the disorganized effort.

Trump won all 58 of Arizona’s delegates Tuesday night, adding to his pile of supporters who will be with him when the GOP convention is convened in Cleveland this summer. Yet rival Ted Cruz won the majority of support in neighboring Utah’s caucuses, giving him 40 more delegates—essentially making Tuesday’s results a draw and signaling the race is going to be a long and messy road to the 1,237 delegates needed to win the nomination outright.

“I don’t know what we do next,” said one of the many Republicans trying to derail Trump.

This week’s round of voting offered a relatively small pot of delegates, yet neither party could afford to blow off the states before the campaign hits a brief spring lull. The end of the fundraising quarter is next Thursday, and Cruz and Ohio Gov. John Kasich were already looking to spend time around the Easter holiday collecting checks to offset spending. They’ll need every last dollar if they are to knock the billionaire off his pedestal.

The race now looks ahead to Wisconsin, which votes on April 5. Observers say the results there could be a hint at whether Trump can be stopped before the convention, or if there’s simply nothing left to do, leaving dissatisfied conservatives the option to try a third-party effort to derail Trump in November. “Wisconsin will be key in two weeks. If Trump loses Wisconsin, it’s easy to see a path to Trump falling pretty fall short of 1,237 delegates,” said William Kristol, the editor of the Weekly Standard and one of the GOP leaders looking to stop Trump. “If Trump wins … Wisconsin in two weeks, Trump looks more and more likely to be the nominee.”

That’s why outside groups are stepping up their anti-Trump efforts heading into Wisconsin, even if those moves are likely to help Cruz, a figure almost-universally hated among Beltway Republicans. “There’s still definitely a path for Cruz to pass Trump in delegates, but that’s going to require him to win states,” said Tim Miller, a former Republican National Committee official who is now working with the anti-Trump group Our Principles PAC. (Until recently, Miller was the communications director for former Florida Gov. Jeb Bush’s campaign. Bush on Wednesday offered a late-game endorsement of Cruz.)

Winning against Trump, however, has proved difficult. The real-estate mogul now has 752 delegates of the 1,237 required. He has to win 52% of the remaining delegates to make his nomination unstoppable.

Cruz, by contrast, would need to win 83% of the remaining vote to catch up. Kasich is mathematically precluded from winning the nomination on the first ballot in Cleveland. Yet he’s staying in the race to play the spoiler and collect delegates in places like Wisconsin, Pennsylvania and New York.

That’s why Wisconsin, which awards delegates proportional to votes, is the next battle for the GOP. Gov. Scott Walker, who ran for the GOP nomination himself, told reporters in his home state that “there’s really only one candidate” who can deny Trump the nomination.

“Ted Cruz is the only one who’s got a chance other than Donald Trump to win the nomination statistically. And my friend Gov. Kasich cannot,” said Walker, whose most generous donors are now spending on anti-Trump efforts.

But Walker stopped short of endorsing Cruz outright. Instead, he is looking ahead at perhaps a situation where the GOP arrives in Cleveland without a presumptive nominee. “Remember, Abraham Lincoln won in Chicago in 1860 because of an open convention,” Walker told WTMJ-AM 620. “He was not the front-runner when he came in. In fact, he wasn’t even near the front until several ballots in. That gives us hope. Our first Republican president, and arguably one of our best, was someone who came in through an open process.”

Indeed, the intra-party fighting among Republicans was far from over. Some party leaders were promoting the idea of a third-party candidacy—even if a candidate was hard to identify. Kristol, who was Vice President Dan Quayle’s Chief of Staff, said recruiting someone might be easier after Wisconsin, when a Trump nomination might be unstoppable. Reality has a way of making men brave.

To say the Republican Establishment is dreading a Trump nomination is an understatement. Trump is all bluster in a party that favors rules, he is all show over specifics. Trump prides himself on being unpredictable, yet donors do not like the unexpected—especially those donors who work on Wall Street, which could see stocks tumble in reaction to any number of Trump’s promises, such as a trade war with China. (It’s one reason the international business-oriented Economist Intelligence Unit ranked a Trump win in November among its top risks for the global economy.) That’s why many investors are listening as anti-Trump groups—and there are many—make their pitches. It’s also why Walker and Bush added their voices to the mix on Wednesday.

Trump relishes the Establishment’s quandary. “If they want to be smart, they ought to embrace this movement,” he told reporters this week. If not, Republicans would lose in November. “You cannot be that spiteful, because you will destroy the country.”

It might be too late to stop Trump. For almost a year, he’s been atop the field, and none of the things he has said have proved disqualifying in the minds of voters. It’s why likely Democratic nominee Hillary Clinton has started taking on Trump directly, even though she, too, still has a still-in-progress primary fight against Bernie Sanders. She’s ready to turn to November, as are Republicans—but only if they don’t have Trump as their party leader. 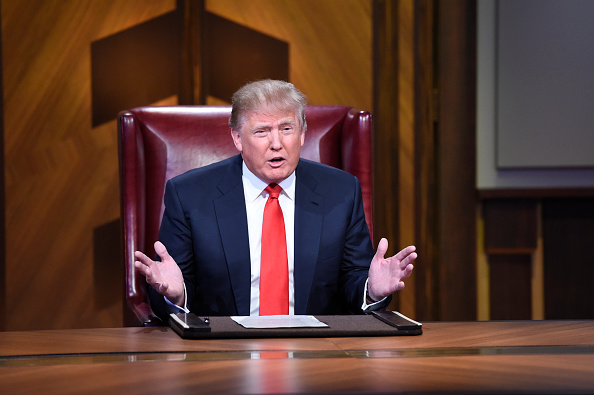 How Reality TV Took Over U.S. Politics
Next Up: Editor's Pick