Belgium's Security Failures Made the Brussels Attacks All But Inevitable

In this framegrab taken from VTM, something appears to drop from inside the pant leg of Salah Abdeslam as he is arrested by police during a raid in the Molenbeek neighborhood of Brussels, Belgium, March 18, 2016.
VTM/AP
By Vivienne Walt/Paris

Just three days ago, Belgian Foreign Minister Didier Reynders issued a chilling warning: Salah Abdeslam, the only alleged perpetrator of last November’s Paris attacks believed to be still alive and at large, had been primed to launch an attack on Brussels, until police nabbed him last Friday in the Belgian capital.

“He was ready to restart something in Brussels,” Reynders told reporters, citing Abdeslam’s testimony in custody. What is more, police had found “lots of weapons, heavy weapons” during the raids that culminated in Abdeslam’s arrest, suggesting that a “new cell” of jihadists was at work in the city, he said.

It took less than two days for the foreign minister’s prediction to be proved fatally right. At 8 a.m. on Tuesday morning, two suicide bombers blew themselves up in Brussels airport, killing 11 people, and a third man detonated a suicide bomb one hour later in an underground train in central Brussels, killing 20 more. ISIS claimed responsibility for the bombings a few hours later, as it did for the Paris attacks, which killed 130 people.

But even as Belgians absorb the shock from Tuesday’s bloodbath, there is a clear and unsettling sense that intelligence and security services have been caught badly short in confronting the lethal dangers closing in their small country. That seems especially true because of two factors: First, Belgian officials have for months said that signs pointed to jihadist plots in the country. Second, Belgian police finally cornered Abdeslam—after Europe’s biggest manhunt in years—just a few blocks from his family apartment in the immigrant-heavy Brussels neighborhood of Molenbeek.

Rather than holing up in a remote location, Abdeslam had apparently hidden in plain sight for months, a short walk from the police precinct where SWAT teams have launched countless street-to-street raids since November. Officials believe the Paris attacks were largely hatched within Molenbeek and carried out residents of the area, home to about 100,000 people, many of them second- and third-generation offspring of Moroccans, who arrived during the 1960s and 1970s to work in the now-defunct steel industry.

Although intelligence experts in both the U.S. and Europe have decried the holes in Belgian intelligence since the Brussels attacks, those failings that led up to Tuesday’s bombings seem sadly understandable to many locals. In interviews with TIME on Wednesday, Molenbeek officials and life-long residents describe a parallel world, in which many residents of the area feel so alienated from police and government officials that they barely feel part of Belgium at all. That sense has endured over the decades, even as generations have been born and raised in the neighborhood. “There are many people who do not live in the society, but live alongside the society,” Molenbeek Mayor Françoise Schepmans told TIME by phone. “So it is easy to hide in this neighborhood.”

Read More: Can a ‘Sibling Effect’ Help Draw the Troubled Toward Terror?

Schepman said that although Tuesday’s attacks left her shaken, they had not totally surprised her. “The attacks were planned before Abdeslam’s arrest, so voilà,” she said. “The police, the justice, did not have the means to move quickly against these people. They were blind. They hit wherever, whenever.”

Despite many community attempts to integrate young Muslims in Brussels, their efforts face daunting challenges. “These youth are Belgian, they are born here, yet they feel they are not recognized as Belgians,” Bachir M’Rabet, a youth coordinator for Molenbeek’s Le Foyer community center, told TIME on Wednesday. As such, jihadist groups offer a sense of belonging to some of those youth. “They look for an identity elsewhere.”

Complicating the police work, some of the youth in Brussels have drifted from common crime into violent extremism, including those recruited to jihadist activities while in prison—like some of the suspects in Tuesday’s Brussels attacks, and some of those who launched last November’s Paris attacks. “They developed a culture of delinquency before terrorism,” M’Rabet says.

On Wednesday, Belgian officials identified one of the Brussels airport bombers as Ibrahim El Bakraoui, 30, and the train bomber as his brother Khalid, 27—both seasoned criminals with a long rap sheet including carjacking, and stints in jail.

A composite picture made of handout pictures released by Interpol on March 23, 2016, of Brahim El Bakraoui (L) and Khalid El Bakraoui.
Interpol—Handout/EPA

Abdeslam, 26, had been arrested in earlier years for drug peddling, and seemed to have been recruited in prison, after meeting Abdelhamid Abaaoud, the suspected ringleader of the Paris operation, who French police killed in a gun battle days after those attacks. (Belgian officials have also named the second bomber at the airport as Najim Laachraoiu, an ISIS bombmaker.)

Belgian police and intelligence officials have also faced years of budget cuts and personnel shortages, as well as a fractured political system, with deep schisms between the country’s French-speaking and Dutch-speaking populations. In Brussels, a city of 1.1 million people, there are six separate police forces. Facing a deep recession, the government in 2014 scrapped plans to boost the small security budget by $217 million, agreeing to increase the funds by $434 million only after the Paris attacks exposed the deep-seated terror networks in Brussels.

Read More: Why Europe Is Ground Zero for Terrorism

All those factors have severely hampered the speed and capability in unraveling jihadist networks, according to officials. And the embarrassments look set to continue for Belgian authorities. It emerged Wednesday that Ibrahim Bakraoui was detained by Turkey last June as a potential foreign fighter. Belgium was informed of his arrest, but said it was unable to link him to terrorist activity and did not request an extradition, the Guardian reports. Instead, Bakraoui asked to be deported to the Netherlands — from where he was free to travel anywhere in the European Union. Once again, a jihadist had apparently slipped through the state’s fingers.

In an interview in Brussels in January, Alain Winants, former chief of Belgium’s State Security Service between 2006 and 2014, told TIME that the country’s politicians had for years sidelined intelligence officials, and that the agency was hobbled in its work. “There was not only a lack of interest but distrust from the political world in intelligence,” said Winants, who is now a Supreme Court prosecutor. “It was impossible to do what we had to do,” he said, adding with a chuckle, “James Bond could never be a Belgian.” 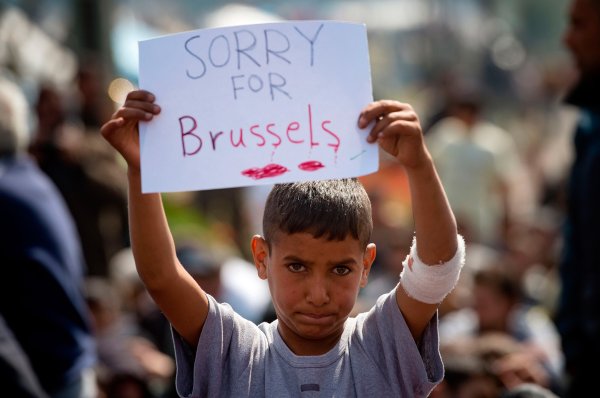 Refugees Could Be the Next Victims of the Brussels Attack
Next Up: Editor's Pick