Petrobras reported a record loss for the fourth quarter, a horrendous performance that raises questions about the company’s ability to handle its mountain of debt.

The state-owned Brazilian oil company announced that it lost more than 36 billion reais in the fourth quarter, or more than $10 billion, a 40 percent increase compared to the fourth quarter of 2014. The losses were all the more staggering because the previous year’s figures were inflated due to the massive corruption scandal, which continues to bedevil the company.

The problem for Petrobras is that it has the world’s largest pile of debt, bigger than any other oil company. And that debt, much of which is priced in U.S. dollars, is becoming more expensive to service, particularly since the Brazilian real has depreciated significantly over the past year. As the Wall Street Journal notes, Petrobras’ debt has jumped to just about 800 billion reais, or about 10 percent higher than at the end of 2015, despite spending cuts.

Oilprice.com: The Current Oil Price Rally Is Reaching Its Limits

Petrobras previously announced plans to sell off $15 billion in assets, but has struggled to find buyers.

The results were vastly worse than the market expected. A Reuters survey beforehand found that even the most pessimistic estimates only predicted a loss of 9.7 billion reais for the quarter. Petrobras also wrote off 46.4 billion reais in impairment charges, 83 percent of which was connected to upstream oil assets. That came as falling oil prices pushed some deposits out of reach, forcing write-downs.

Petrobras also wrote off 5.28 billion reais related to a large refinery in Rio de Janeiro that has yet to be completed due to insufficient funding. Even after spending $14 billion on the refinery, it may not be completed until 2023. This year will mark the second year in a row that Petrobras does not pay any dividends to both private and government shareholders.

Petrobras’ CEO Almir Bendine said that despite the astronomical debt, the company has enough cash flow from its operations to meet all of its obligations through the end of 2017 at least, even if it fails to realize the planned $14 billion in asset sales. “Even if we hit a road-bump we have sufficient cash through 2017,” Bendine said. “This doesn’t mean if we have good opportunities to raise cash or lengthen maturities we won’t do it.”

The dismal performance for Petrobras, an iconic company in Brazil and also the largest company in Latin America, mirrors the current state of the Brazilian economy as a whole. Brazil is in its worst recession in a century and GDP will contract by more than 3 percent this year. Low oil prices and the corruption scandal have blown up the economy, and the resulting economic crisis has mushroomed into a political crisis, a situation that could yet force President Dilma Rousseff from power. On Monday, another man was arrested in Portugal in connection with the Petrobras bribery scandal.

Political opponents of President Rousseff are set to begin impeachment proceedings, and with her administration on the defensive, the opposition is considering adding new charges to their case against her. The allegations include cooking the budgetary books, but one Senator says that Rousseff also knew about the Petrobras corruption – she sat on the company’s board between 2003 and 2010 – and even used some ill-gotten funds for her campaign.

Her appointment of former President Luiz Inacio Lula da Silva to her cabinet has fanned the flames of discontent as the public sees it as a move to protect Lula from his own corruption charges. A court blocked the appointment, and the situation is still fluid. More than two-thirds of the Brazilian public think that Rousseff should be impeached.

All of this leaves Petrobras in a quandary. Its credit rating is in junk territory, its debt situation is not improving, the corruption scandal continues to implicate more and more people, and oil prices remain stubbornly depressed. “It was an extremely difficult year for the oil industry in general,” Petrobras’ CEO Aldemir Bendine said. 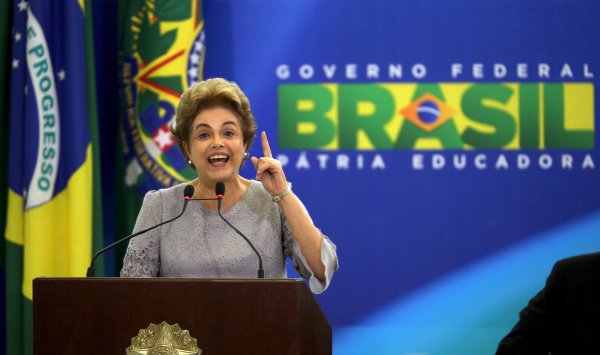