What To Know About the Brussels Terrorist Attacks

By Tara John and Katie Reilly and Charlotte McDonald-Gibson/Brussels

At least 34 people were killed and 190 wounded when three explosions hit Brussels on Tuesday morning, the first two at Zaventem airport and the third on a subway train near European Union headquarters, according to the Associated Press. Belgian federal prosecutor Frederic Van Leeuw called all three explosions terrorist attacks, and ISIS later claimed responsibility for them, the AP reported. Belgium raised its terror threat to the highest level for “a serious and imminent threat.”

Here are the key details to know:

Two blasts hit Brussels airport, around 8 a.m. local time. The first explosion tore through the departure hall, while the second happened minutes later in another area. Images and videos shared on social media showed shattered windows, fallen ceiling tiles and broken glass scattered around the departure hall, while a plume of smoke was also seen rising from the terminal as passengers fled the area. A third bomb was later deactivated at the airport, according to the AP. Belgian Health Minister Maggie de Block said at least 11 were killed and 81 were injured at the airport.

The third blast hit Maelbeek station in the city center, a short walk from many European Union offices, around 9:10 a.m. Brussels Mayor Yvan Majeur told reporters that the bomb on the subway train killed at least 20 and injured more than 100 people, the AP reported.

ISIS claimed responsibility for the attacks

ISIS claimed responsibility for the attacks on Tuesday. The group said its members opened fire in the airport and said “several” detonated suicide belts, the AP reported.

On Wednesday, Belgian police sources named the two suicide bombers as brothers Khalid and Brahim El Bakraoui, according to a public broadcaster. The brothers were previously known to Belgian police, and Khalid El Bakraoui is believed to have rented an apartment, where police found the fingerprints of Paris terror suspect Salah Abdeslam, the BBC reports.

Police are now hunting a third man who was pictured with the two brothers at Brussels Airport on Tuesday, but is believed to have escaped the airport. Local newspaper DH has identified the wanted man as Najim Laachraoui, according to Reuters. Laachraoui has been named by police as an accomplice of Abdeslam and a bomb maker.

Chemical products, an ISIS flag and a new explosive device containing nails were found during raids taking place throughout the country after the attacks, the AP reported.

Transportation in the city came to a standstill

Hundreds of travelers were stranded in Brussels, as all of the stations in the city’s bus, tram and subway networks were shut down in response to the attacks. The airport, museums and international train services were also shut down, halted or diverted. The Brussels Airport CEO said the airport would remain closed until Wednesday.

While cities across the world boosted security measures, U.S. Department of Homeland Security Secretary Jeh Johnson said in a statement that there is “no specific, credible intelligence” of any similar plots against the U.S.

International leaders responded to the attacks with calls to strengthen alliances and combat the deadly threat of ISIS. “What we feared has happened,” Belgian Prime Minister Charles Michel said. “In this time of tragedy, this black moment for our country, I appeal to everyone to remain calm but also to show solidarity.”

Heads of state in the 28-nation European Union pledged to fight terrorism with “all necessary means” after the attacks, the AP reported. In a statement, the leaders pledged to be united in “the fight against hatred, violent extremism and terrorism” and said the attacks “only strengthens our resolve to defend European values and tolerance from the attacks of the intolerant.”

Speaking from Cuba, U.S. President Barack Obama called the world to unite “in fighting against the scourge of terrorism.” Other leaders, including French President Francois Hollande, Russian President Vladimir Putin and U.K. Prime Minister David Cameron, condemned the attacks and expressed their condolences to Belgium.

Salah Abdeslam, the sole surviving alleged perpetrator of the November attacks in Paris, was captured Friday in Brussels, the culmination of a manhunt that lasted more than four months. The city has been on high alert since the November attacks, after which Abdeslam fled to Brussels. Prosecutors said it’s not possible at this time to establish any links between the attacks in Brussels and those in Paris, the AP reported.

Belgian Interior Minister Jan Jambon said that while authorities knew more attacks were a possibility, they “could not have imagined something of this scale” and had no information about the planning of the Brussels attack.

Brussels residents offered lodging or a ride to those left stranded after the city went on lockdown, using the hashtag #ikwilhelpen (“I want to help” in Dutch). Facebook also activated its Security Check for users located in Brussels. Both the social media hashtag and the Security Check were implemented in November’s terrorist attacks in Paris.

Social media users expressed their solidarity with Belgium by sharing images of a crying TinTin— the cartoon character is a national symbol for Belgium. The French cartoonist known as Plantu shared an image for Le Monde of the personified versions of the French and Belgium flags annotated with dates corresponding with each country’s deadly attacks. 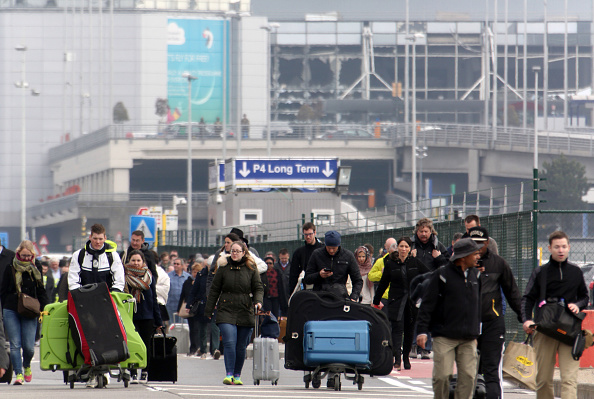 World Leaders and More Respond to Brussels Attacks
Next Up: Editor's Pick