Could a Trump Nomination Make Arizona a Swing State?

Both Republican and Democratic strategists say a Donald Trump nomination could put the normally rock-solid red state of Arizona in play in November.

Though the Sun Belt state has gone for Republican presidential candidates by wide margins since 2000, advisers from both parties see putting the real estate mogul at the top of the ticket as throwing that into limbo, thanks to a growing Hispanic population and a large bloc of moderate women.

Top officials at the Democratic National Committee have begun considering plans that would include a general election battle in Arizona. Joel Benenson, the Hillary Clinton campaign’s pollster and strategist, told TIME that if Trump is the nominee, Arizona will be one of several states “on the periphery of the Republican universe that get into play” for Democrats.

Republicans are preparing for a real race too. “In a stand-up race with Hillary and The Donald, I definitely say Arizona is in play,” said Chuck Coughlin, a Republican operative in Arizona who engineered Jan Brewer’s gubernatorial campaigns, adding that Clinton would have a serious shot at winning the state against Trump—particularly if Trump is unable to swing more toward the center.

In an early sign of unrest in the state, Republican Sen. John McCain is now in a statistical tie in a poll against Democratic Rep. Ann Kirkpatrick, who is running for his seat, after years of blowout victories over Democratic challengers. McCain has generally said he’ll support the eventual Republican nominee, but he issued a short statement saying he shared the concerns of anti-Trump campaigner Mitt Romney earlier this month.

“The big swing demographic is white women and the big turnout factor is young Latinos ,” said Andy Barr, a Democratic operative in Arizona who has worked on congressional and statewide initiatives. The Republicans “really may have awoken a sleeping giant in the Southwest if these folks turn out and vote.”

Arizona has not been kind to Democrats in the past. As the Republican presidential nominee in 2008, McCain won Arizona by eight points, while Mitt Romney beat Obama by a nine-point margin in 2012.

The primaries on Tuesday could provide a hint. Clinton and Trump are expected to win the state by significant margins and have been campaigning there in weeks, but two voting blocs in the state are likely to see swings in turnout: Hispanics and moderate women.

Hispanics make up about 30% of Arizona’s population, but in 2012 were only about 18% of those who showed up to vote, according to exit polls. Democrats, who have waited for years for the latter number to catch up, say that Trump could be the ticket. He has a 77% unfavorable rating among Hispanics nationally, according to Gallup, but observers say even that understates the depth of dislike for him.

Neighborhood groups and non-profit groups have stepped up voter registration, said Kate Gallego, a city councilwoman and wife of Rep. Ruben Gallego. And while turnout in primaries can be a poor indicator of general election turnout, Democrats in the Arizona point to high numbers of voter registration in recent months. Registration among Democrats increased by more than 30,000 between Jan. 12 and Feb. 24, while Republican enrollment increased by 22,000. Democrats in the state attribute that to a jump in Hispanics registering.

But just as consequential will be Republican and independent women, who constitute a key swing voting group in the state and could easily turn out for Clinton in a general election. National polls widely show Trump losing badly among moderate women, and Democrats and Republicans alike have slammed him for statements they say are misogynist.

The conservative group Our Principles PAC released an incendiary ad against Trump this month has women reading back quotes Trumps has said: “Bimbo. Dog. Fat pig,” three women say. Pollsters in both parties say those lines of attack resonate with women. “Women. You have to treat them like s—,” a woman reads.

And with two women at the top of the ticket, the gender line will be more starkly drawn. “The traditional swing voting bloc is white Republican women, and those women are probably going to be in play if you’ve got a woman nominee for president and women nominee for Senate,” said Brian Murray, the former executive director of the Arizona Republican Party said.

Still it’s unclear whether the national parties will take action in Arizona. The Democratic Senatorial Campaign Committee is eyeing other states with large Hispanic populations that may be easier to win, such as Nevada and Colorado. And Clinton’s campaign and the DNC will not decide where to allocate resources for some time. “Stay tuned,” said spokesman Luis Miranda.

But Clinton adviser Benenson told TIME that he sees a broader definition of swing state this year that would include Arizona. “The states that you’re more likely to see added to the battleground universe are states like Georgia, which in 2008 Barack Obama only lost by 7 points, North Carolina and Arizona,” the Clinton strategist said. “If you watch their debates, if you watch their candidates, they are reinforcing all the negatives of the Republican brand.”

Republicans see Arizona as part of a nationwide unsettling Trump is causing. “If Trump is the nominee, I think a lot of things get thrown up in the air. It could be a state like every other state,” said former Arizona Rep. Jim Kolbe, “and if it’s up for grabs than a lot of other states would be up for grabs.”

Still, not all Republicans are ready to endorse the idea that Arizona could swing in November.

“If Democrats would like to bring their money to Arizona in an effort to turn it blue, we would welcome their money,” said former Arizona Sen. Jon Kyl, “but they will be sorely disappointed.”

With reporting by Philip Elliott. 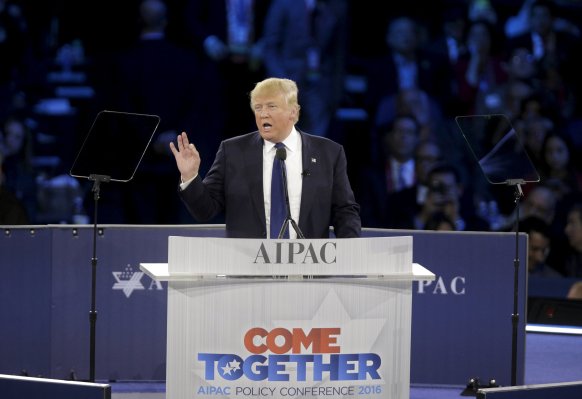