Seeking to calm worries about his scant foreign policy credentials, Republican presidential front runner Donald Trump used his turn before the United States’ largest pro-Israel group to offer his view for the Middle East. He did himself few favors, often appearing to contradict himself and at times sounding just like the politicians he lambastes.

Trump earned a subdued response from the bipartisan audience at the annual confab of the American Israel Public Affairs Committee. He delivered a carefully prepared speech off a teleprompter, breaking with a past promise to never use the devices. After opening with a pledge not to “pander” to the crowd, Trump did just that, dramatically altering his tone and policy toward Israel from what he has been espousing on the campaign trail.

With the GOP nomination moving ever closer to his grasp, Trump sought to recalibrate his approach to the thorny subject that he once said was the toughest negotiation in the world. He also arrived at the cavernous sports arena on the defensive after Democratic frontrunner Hillary Clinton used her morning turn to compare Trump to a biblical villain and his policies to isolationist pre-World War II America.

“I didn’t come here tonight to pander to you about Israel,” Trump said. “That’s what politicians do: all talk, no action. I came here to speak to you about where I stand on the future of American relations with our strategic ally, our unbreakable friendship, and our cultural brother, the only democracy in the Middle East, the State of Israel.”

A much-publicized effort by a group of Rabbis to stage a public walk out on Trump’s address appeared to have fizzled, but his reception appeared to be the coolest of the four candidates to address the group. Lines apparently designed to earn applause, received only a tepid response from the crowd on many occasions. Yet Trump earned raucous applause—and many boos—when he suggested that the president “may be the worst thing to happen to Israel” and that Clinton was a “total disaster.” When he concluded his remarks he received a standing ovation.

Trump devoted much of his speech to criticizing the Iranian government and the Palestinian Authority—red meat for the pro-Israel audience. He promised to “dismantle” the 2015 nuclear accord with Iran, but minutes later said his goal was to “restructure” the agreement.

He repeatedly lambasted the Palestinian support for terrorism, particularly material support for the families of assailants. “In Palestinian textbooks and mosques, you’ve got a culture of hatred that has been fermenting there for years, and if we want to achieve peace, they’ve got to end this indoctrination of hatred,” Trump said. “There is no moral equivalency. Israel does not name public squares after terrorists. Israel does not pay its children to stab random Palestinians.”

When Trump suggested that he had studied the Iran deal to an extent “greater by far than anybody else,” the audience broke out in laughter at the outlandish claim.

Trump sought to clean up a series of controversial statements about Israel in his remarks. “We know Israel is willing to deal,” Trump said, reversing himself from a December interview with the Associated Press when he suggested Israel was unwilling to make the sacrifices necessary for Middle East peace.

“A lot will have to do with Israel and whether or not Israel wants to make the deal, whether or not Israel’s willing to sacrifice certain things,” Trump said at the time. “They may not be, and I understand that, and I’m okay with that. But then you’re just not going to have a deal.”

He also promised to stand on the side of Israel, only hours after repeating on CNN that he hoped to be “neutral” in the Israel-Palestinian conflict.

Trump avoided other areas of disagreement with the pro-Israel crowd, after suggesting earlier Monday that Israel should repay the U.S. for the foreign aid it has received—aid that AIPAC lobbies to maintain. He also skirted controversial issues including campus efforts to silence supports of Israel and the Boycott, Divestment, and Sanctions (BDS) movement, all of which were highlighted by the three other candidates who spoke to the group.

The speech was littered with typical Trump-isms. He cast his appearance as the Grand Marshal of the 40th Salute to Israel Parade in New York City in 2004 as a dangerous act. “I took the risk,” he said.

Speaking before Trump, Ohio Gov. John Kasich offered a comprehensive vision for American-Israel relations. Following Trump, Texas Sen. Ted Cruz mocked Trump’s use of “Palestine” repeatedly in his remarks, stating, “To the surprise of the previous speaker, Palestine has not existed since 1948.” Cruz also repeated Trump’s earlier claims for neutrality.

Before the event, Cruz fundraised with former foe Sen. Lindsey Graham and more than 200 top Jewish donors and activists, as well as many AIPAC board members, at an adjacent pub at an event that raised more than $200,000 for his campaign. At the fundraiser, Cruz criticized Trump’s judgement on foreign policy, according to two sources in attendance. 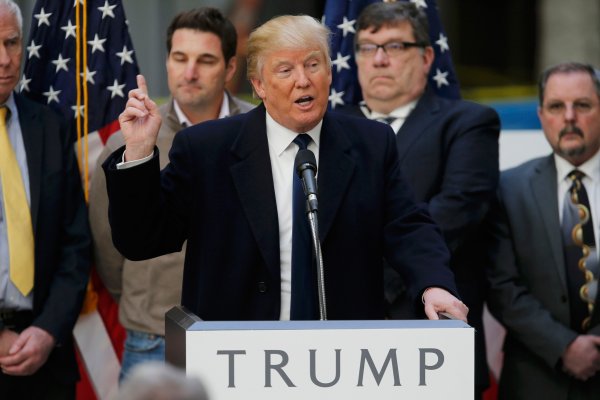 Trump Offers Conservatives a Deal on Supreme Court
Next Up: Editor's Pick