Merrick Garland Is Used to Being a Political Punching Bag

Judge Merrick B. Garland listens to US President Barack Obama nominate him to the US Supreme Court, in the Rose Garden at the White House, March 16, 2016 in Washington, DC.
Mark Wilson—Getty Images
By Jay Newton-Small

Go back and look at the transcripts the day that Merrick Garland was confirmed to the D.C. Circuit Court of Appeals in 1997 and every single Republican Senator who rises in opposition to his candidacy first caveats their remarks by saying they do actually believe Garland to be a good, if not great, judge and their opposition had nothing to do with him.

At the time, Republicans were upset that President Bill Clinton had originally nominated Garland to serve as that bench’s 12th justice. Republicans argued that the court’s workload did not demand 12 justices and thus did not warrant the expense of adding one at the cost to tax payers of an estimated $1 million a year.

Clinton was forced to withdraw Garland’s original nomination and renominate him to the 11th seat when that seat became open—the whole process took nearly two years. Still angry at Clinton’s attempt to stack the court, 23 Republicans voted against Garland.

Then Judiciary Committee Chair Orrin Hatch, a Utah Republican, shook his head in frustration at his colleagues’ pettiness. “Nobody in this body is willing to challenge the merit of Merrick Garland’s nomination,” Hatch said in a floor speech shortly before the vote. “In fact, they openly concede that Mr. Garland is highly qualified to be an appellate judge. Rather, they use arguments that the D.C. circuit does not need 12 judges in order to oppose the confirmation of Mr. Garland for the 11th seat on this court.”

Not only did 32 Republicans end up voting for Garland, seven of whom, including Hatch, are currently in the Senate, but a few even said Garland could make a good Supreme Court justice. “We need judges in America with real intellectual abilities. We need judges like [Oliver Wendell] Holmes and [Louis] Brandeis and [Benjamin] Cardozo on the courts of the United States,” said then-Republican Arlen Specter that day. “We need them on the Supreme Court of the United States. This is a real prospect. We ought to get him up and out.”

This time around, Hatch and several other Republicans voiced similar support for Garland, while again condemning the circumstances under which he was nominated. But this time around the Republican Party, not unsurprisingly in this climate, split on Garland. Over the weekend, Senate Majority Leader Mitch McConnell became the first Republican Senator I could find who came out on the record against Garland for his substance.

“I can’t imagine that a Republican majority in the United States Senate would want to confirm, in a lame-duck session, a nominee opposed by the National Rifle Association, the National Federation of Independent Business that represents small businesses,” McConnell told “Fox News Sunday.” “I can’t imagine that a Republican-majority Senate, even if it were assumed to be a minority, would want to confirm a judge that would move the court dramatically to the left.”

On several Sunday shows, McConnell reiterated that he would not allow Garland’s confirmation to happen “under President Obama,” even when pressed if that could result in a potential President Hillary Clinton nominating someone even more liberal than centrist Garland in his stead. Hatch and other Republicans earlier last week had floated the idea that Garland might be confirmed in a lame-duck session were Republicans to lose the White House and/or Senate.

What’s striking about McConnell’s criticism of Garland is that it echoed that of the National Republican Senatorial Committee in a statement Thursday in response to Garland’s nomination. “Given the company Garland is keeping,” the press release declared, quoting Democratic praise for Garland, “it’s clear that the president’s nominee is a liberal judge who will drastically shift the balance of the Supreme Court.”

Of course Garland would shift the court to the left. Pretty much any nominee not Antonin Scalia and maybe a handful of conservative justices in the country would move the court to the left. Getting those conservatives through the Senate, where Republicans do not have and are unlikely to have a filibuster-proof majority in this session as well as the next, is all but impossible. As Ed Whelan, a former Scalia clerk told the Washington Post in April, Garland was the best nominee conservatives could hope for under a Democratic president.

McConnell’s positioning is as political as the Democratic nomination of Garland. Both parties have electoral interests at stake and for McConnell’s vulnerable members to succeed in opposing hearings or a confirmation of Garland, he has to be seen as an extreme liberal partisan.

So, buckle up, Merrick Garland. As much experience as Garland had fighting for nearly two years to be confirmed by a largely friendly Senate last time, this process is going to be a whole lot more difficult. 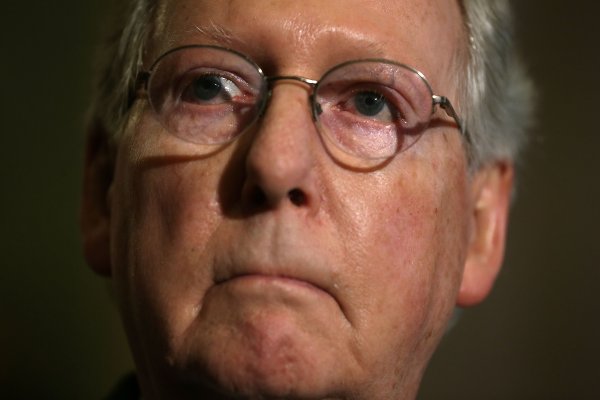