Ninety-two people went on trial in Bangkok this week accused of being part of a transnational human-trafficking network that held people in barbaric conditions in camps close to the Thai-Malaysian border.

The case was sparked by the gruesome discovery of 36 bodies buried in shallow graves at the site of one of seven prison camps uncovered in Thailand’s southern province of Songkhla last year. The mostly Thai defendants — there are also four Rohingya Muslims and one Bangladeshi on trial — are facing charges including human trafficking, illegally holding others and concealing bodies. Among them are provincial government and law-enforcement officials, including a former senior army general, Manas Kongpan, who is accused of being the linchpin of the network.

The trial is expected to be completed within a year, but it touches on an ongoing migration crisis that reaches across Southeast Asia’s borders.

1. It could be just the tip of the iceberg
An estimated 170,000 people, both Rohingya Muslims fleeing persecution in Burma and Bangladeshis trying to escape poverty, have made a risky maritime journey since 2012, setting off southward from the shores of the Bay of Bengal, according to the U.N.’s refugee agency. Testimonies from those who made it to the relative security of Malaysia, as well as from people living in displacement camps in western Burma, suggest that many refugees would have passed through these jungle camps on the Thai-Malay border.

Read More: Rohingya Survivors Speak of Their Ordeals as 139 Suspected Graves Are Found in Malaysia

Amy Smith, executive director at Fortify Rights, a human-rights group that is closely monitoring the trial says there may be more mass graves yet to be discovered in Thailand. “That’s something also the Thais should be looking into,” she says. (Malaysia found hundreds of graves when it uncovered trafficking camps on its side of the border.)

But following a month-long crackdown in May, Thai authorities declared there to be no trafficking camps left in the country.

Witnesses have told the trial they were lured from the shores of the Bay of Bengal with the promise of the good life in Malaysia, Radio Free Asia reports. But instead of disembarking there, they were held while traffickers demanded that their families back home paid ransoms. If they couldn’t pay, the victims were used as slave labor, or simply killed.

2. It’s about time
A well-oiled system of people smuggling, which would have earned those involved millions of dollars, is thought to have been operating in Southeast Asia for some time. “Everybody knows those trafficking camps have been in existence for decades,” says Smith. “It is evident from the fact that those remains that were uncovered were just bones.”

The scale of trafficking ramped up after 2012, however, when communal conflict broke out between Rohingya Muslims and ethnic Rakhine Buddhists in Burma. The Rohingya, who Burma denies citizenship, bore the brunt of the violence — dozens were killed and almost 140,000 were displaced when rampaging mobs burned down entire neighborhoods.

Read More: These Aren’t Refugee Camps, They’re Concentration Camps, and People Are Dying in Them

Reports soon emerged, especially through local publication Phuketwan, that hundreds of Rohingya were being held in holding camps in southern Thailand amid a mass exodus from Burma’s Rakhine state. An investigative report from Reuters in November 2013 exposed how the network of camps — described as a “tropical gulag” — were operating with the knowledge and even complicity of Thai officials.

Still, it took until several months into 2015 for Thailand to unearth the bodies in Songkhla and begin making arrests. That came after the U.S. had downgraded the country in its annual Trafficking in Persons report the previous year, raising the possibility of damaging trade sanctions against a long-term American ally in Southeast Asia. Thailand began pushing boats full of desperate people back out to sea, sparking a regional crisis with hundreds of people stranded in open waters without food and drinking water.

3. The trial is big, but not big enough
Fortify Rights believes that a total of 153 arrest warrants have been issued in Thailand relating to the case, but authorities do not appear to be looking to make more arrests beyond the 92 on trial.

Officials high up in the Thai government had prematurely ended the investigation, Smith says. The police official tasked with the probe has fled Thailand and sought asylum in Australia, from where he has claimed that he was subjected to intimidation when his work threatened more senior members of the Thai government, which since May 2014 has been under the control of a military junta.

There are also concerns about the safety of some 300 mostly Rohingya trafficking survivors who are witnesses in the trial, which involves powerful defendants. Most are staying in government-run shelters from which some have already vanished, raising concerns about what protections are in place for their security.

4. The root causes have not gone away
There has been a dramatic reduction in boat traffic since last May’s crackdown. The U.N. estimates that only 1,600 people embarked from Burma and Bangladesh in the second half of 2015, compared with 31,000 departures in the first half of the year.

The decrease could be attributed to a more hopeful atmosphere in Burma, where a democratically elected president will take power on April 1, the first in more than half a century. But hopes that the new administration led by Nobel Peace Prize winner Aung San Suu Kyi will improve the situation for the Rohingya might be far-fetched. Suu Kyi has insisted that the solution to the issue lies in improving the rule of law, and has been criticized for failing to speak out against Islamophobia among many Burmese Buddhists, who consider the Rohingya to be interlopers from Bangladesh.

Hundreds of thousands of Rohingya were not allowed to vote in the November elections that brought Suu Kyi’s party to power. Their movement is restricted, and about 140,000 continue to live in poorly supplied camps, meaning that another boat exodus could still happen, says Smith. “The option of getting on a boat is going to be a hell of a lot better than staying and dying in those camps,” she adds. 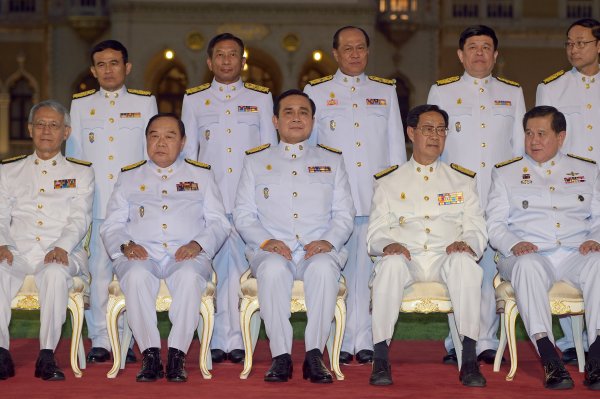 Thailand's Generals Want Seats in a Future Senate
Next Up: Editor's Pick