Conservatives Grasp for a Plan to Stop Trump

Conservative activists determined to stop Donald Trump huddled in Washington on Thursday, but left without formulating a clear plan to derail the runaway Republican front-runner’s candidacy.

At the top of the agenda was the creation of a GOP “unity ticket” designed to unite the right against Trump. “If that unity ticket is unable to get 1,237 delegates prior to the convention, we recognize that it took Abraham Lincoln three ballots at the Republican convention in 1860 to become the party’s nominee and if it is good enough for Lincoln, that process should be good enough for all the candidates without threats of riots,” Erick Erickson, a conservative blogger who helped convene the group, wrote in a statement after the meeting.

No candidate has a viable shot to amass the outright delegate majority required to clinch the nomination except Trump, who is more than halfway there already. And there is no indication that Trump’s two remaining rivals, Texas Senator Ted Cruz and Ohio Governor John Kasich, are inclined to join forces.

Conservative activists are also sketching plans for a furious floor fight at July’s Cleveland convention that could deny Trump the nomination if he falls short of the delegate threshold. To that end, the group is urging former Republican candidates who oppose Trump “to unite against him and encourage all candidates to hold their delegates on the first ballot,” rather than release them and allow Trump to pounce.

Another option anti-Trump activists are discussing is the prospect of a third-party challenge. In this scenario, anti-Trump forces would coalesce around a consensus conservative and use their money and organizational muscle to run that candidate on a third-party ticket. This scenario would pose logistical challenges. Obtaining ballot access in all 50 states is an expensive and time-consuming endeavor that would need to begin swiftly.

Under this scenario, the goal would be for the conservative third-party candidate to pick off a few key states — enough to deny both Trump and likely Democratic nominee Hillary Clinton the 270 electoral votes required to win the presidency.

Under the Constitution, the outcome of the election would then be determined by Congress. The House of Representatives would select the President from among the top three candidates, with each state delegation getting one vote, while the Senate would choose the Vice President from the top two candidates. Both chambers of Congress are controlled by the Republican Party, so the conservative third-party challenger would stand an excellent shot at becoming Commander in Chief, though they might end up with Trump as their Vice President in exchange.

That’s the best-case scenario. If the plan goes bad — indeed, if the group can even get it off the ground — it could cannibalize Trump’s candidacy and boost Clinton’s chances of getting elected, while infuriating Trump’s loyal band of supporters in the process. The party’s fault lines would split even further. That’s why even Erickson, a proponent of developing a plan to run a conservative on a third-party ticket, calls it “kind of the last lifeboat option.”

As Trump draws nearer to the nomination, such discussions will intensify. “The issue of Donald Trump is greater than an issue of party,” Erickson wrote Thursday. “It is an issue of morals and character that all Americans, not just those of us in the conservative movement, must confront.” The question is whether they can confront him in time. 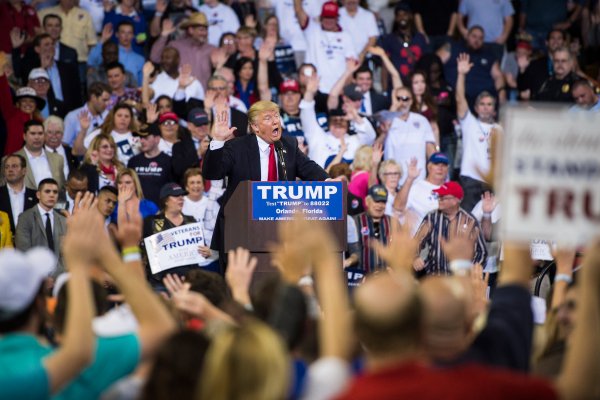 Rabbis to Boycott Donald Trump Speech
Next Up: Editor's Pick