Jason Dalton is seen here in a video arraignment on multiple murder charges on Feb. 22 at the Kalamazoo County Courthouse in Kalamazoo, Mich.
Detroit Free Press—TNS via Getty Images
By Melissa Chan

A lawsuit against Uber filed under the name of the man charged with killing six people in Kalamazoo, Mich. appears to be fake, authorities said Thursday.

Jason Dalton, a former driver for the ride-sharing company, told officials he is not behind a recently filed federal lawsuit that blames Uber for his imprisonment, Kalamazoo County Undersheriff Paul Matyas told TIME. The handwritten complaint, which was widely reported after it was filed Tuesday in the U.S. District Court Eastern District of Michigan, also “definitely” didn’t match Dalton’s handwriting and had a Philadelphia postmark, Matyas said.

“I was highly suspicious when I saw the filing online,” the undersheriff said. “We talked to him and he said, ‘I didn’t do it. I don’t know who did. I didn’t authorize anyone to do it.’”

The court document filed under Dalton’s name seeks $10 million from Uber for emotional distress suffered while working for the company. The grievances listed in the filing included not being paid back wages or overtime, not being given a Christmas bonus or being invited to corporate parties and being forced to work while ill.

Dalton is charged with murder and attempted murder in the “random” shooting rampage Feb. 20 outside an apartment complex, a restaurant and at a car lot. Reports suggest he may be mentally unstable. Dalton has told investigators that he was being controlled by an Uber app through his cell phone, according to the Associated Press.

Dalton’s lawyer and Kalamazoo County Prosecutor Jeff Getting did not immediately return calls for comment. Matyas said his office has alerted the FBI about the bogus lawsuit. 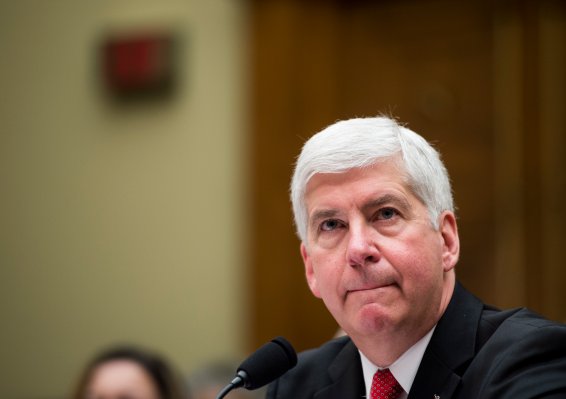 Gov. Snyder Under Fire Over Flint Crisis
Next Up: Editor's Pick